Make a Aeroexpress Regional Booking and Find Some Amazing Deals

Aeroexpress Regional is a Hungarian regional airline operating scheduled flights between Hungary and Romania, as well as chartered flights. The airline's aim is to connect cities that are difficult to reach either by road or rail, such as Cluj and Târgu Mureş. Aeroexpress Regional is part-owned by BASe Airlines (Budapest Aircraft Services) which was founded in 1991.

Aeroexpress Regional currently flies 3 times a week to a handful of remote Hungarian/Romanian locations, including Debrecen, Târgu Mureş and Cluj. The airline's hub is at Budapest Liszt Ferenc International Airport.

As of octubre 2022, Aeroexpress Regional currently flies to only a handful of airports in Hungary and Romania, with the aim to connect towns that are otherwise hard to reach by road or rail links. 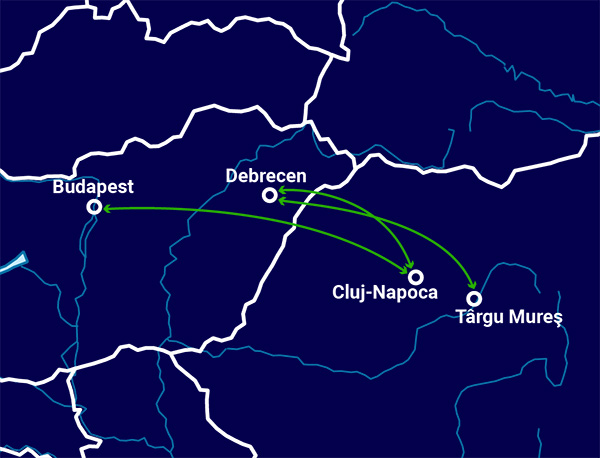 When flying with Aeroexpress Regional, you're permitted to bring one piece of carry-on baggage that cannot exceed a weight of 8kg / 17lbs. The carry-on bag mustn't exceed dimensions of 55 x 40 x 20cm (21 x 15 x 7in). Liquids, cosmetics or aerosols are not permitted on board unless in a container that holds 100ml or less.

You'll be allowed to bring laptops and tablets with you onboard, as long as they can be stored in your hand luggage, as personal items are not part of the airline's baggage allowance.

You're allowed one piece of checked baggage that cannot weigh more than 13kg / 28lbs.

The seating layout for Aeroexpress Regional flights is 2 x 1, with approximately 30 seats per aircraft. Seat selection isn't currently available - please be aware that seats may be assigned after you have checked in and received your boarding pass, or at the gate before boarding.

Due to the short flight duration times between the destinations that Aeroexpress Regional flies to, hot meals are not provided on board, however, the airline will serve mineral water, soft drinks, tea, coffee and snacks as refreshments before you land at your destinations.

To check-in for your Aeroexpress Regional flight, you'll need to do so at the airport you're flying from. Check-in opens 1.5 hours before the scheduled flight departure.

Aeroexpress Regional doesn't currently have its own frequent flyer program, however, you can sign up via the airline's website and become a member. You'll then have access to special, personalised offers and earn miles on every trip, as well as buy award tickets.

Aeroexpress Regional isn't part of any airline alliance. However, the airline is part-owned by BASe Airlines.

Aeroexpress Regional has one aircraft in its fleet - the Embraer 120 ER, which was delivered from Air France Regional's fleet. This aircraft has the capacity to carry 30 passengers. With this aircraft, the airline hopes to be able to eventually cover more of Central Europe's remote destinations.

The airport was originally called Budapest Ferihegy International Airport, but the name was officially changed to Budapest Liszt Ferenc International Airport in honour of Franz Liszt, a Hungarian pianist and composer. In 2021, the airport served 4.6 million passengers - a huge drop from the average of 15 million passengers it would serve annually prior to the COVID-19 pandemic.

No, Aeroexpress Regional doesn't fly internationally apart from to two cities in Romania: Cluj-Napoca and Târgu Mureș. The airline plans to expand its services into more of Central Europe in the future.

Can I pay later for Aeroexpress Regional flights?

Yes! If you book your Aeroexpress Regional flights through Alternative Airlines, you can spread the cost of your flight tickets over time when you choose to pay with any of the flexible payment methods we offer on our site, such as Klarna or PayPal Credit. Discover all our financing options on our Fly Now Pay Later page!

From the beginning of September, Aeroexpress Regional, a new Hungarian start-up airline, will be launching its flights between Budapest and Cluj-Napoca, alongside flights to Debrecen and Târgu Mureș. The airline has announced it will operate flights 3 times a week to these destinations in the aim to connect cities that are harder to reach by road or rail.