Make an Air Calédonie Booking and Find Some Amazing Deals

Air Calédonie, officially known as Société Calédonienne de Transports Aériens, is a French airline based in New Caledonia. It is a domestic airline, which operates scheduled passenger and cargo flights to 5 destinations in New Caledonia.

The airline started out in 1954 as Transpac - an airline with the aim to create an air service between Nouméa on the mainland of New Caledonia, and the surrounding islands. It changed its name in 1961 to its current form; Air Calédonie.

Air Calédonie allow one piece of hand luggage per person, weighing a maximum of 5kg. The dimensions of this must be within 45 x 35 x 20 cm.

In addition, passengers are allowed one piece of personal luggage, which can be items such as a handbag, laptop bag or camera.

Passengers are permitted 12kg of checked luggage, or 8kg of luggage for a child.

Air Calédonie are yet to offer online check-in for their flights.

Economy Class is Air Calédone's only cabin class. There a number of different fares that passengers can purchase within the cabin class. These fares give extra perks such as flexible changes and refunds but do not make a difference to the in-flight experience.

Each passenger is given an in-flight magazine to read during the flight.

Please click on the logos below to find out more about airlines that fly similar routes to Air Calédonie:

Moue Airport - The Isle of Pines

Nouméa Magenta Airport is located on the island of New Caledonia, near the capital of Noumea. It is a domestic airport, with 2014 seeing it handle nearly 450,000 passengers. It provides passengers with Shops, Restaurants, Free WiFi, ATM, mailbox and phone services. 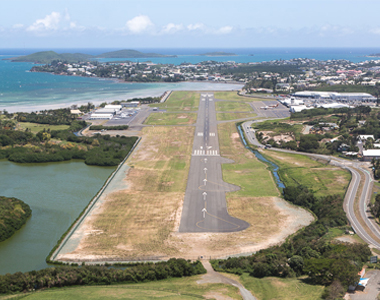 Air Loyauté flights may be disrupted as cyclone ventures nearer: Air Caledonie put on additional flights to transport passengers from the Isle of Pines

Cyclone Gita has caused a maximum level 2 alert in parts of New Caledonia. This means the islands' residents have to stay indoors until the alert is lifted. Mr Diver said people were remaining vigilant and in Noumea the strongest impact of the cyclone was expected to be felt this evening. Noumea is where the airport hub for Air Loyauté is situated. This has caused Air Loyaute, which flies to the Loyalty Islands to cancel today's flights. Air Caledonie put on additional flights to transport passengers from the Isle of Pines, where the airport is now closed, while Noumea's Magenta Airport remains closed.