Make an Air France Booking and Find Some Amazing Deals

Air France is the flag carrier of France and is headquartered in Paris and is a founding member of the SkyTeam global alliance. Air France flies to many destinations around the world including Aberdeen, Abidjan, Agen, Ajaccio, Djibouti City, Douala, Dubai, Johannesburg, Jersey, Jakarta, Istanbul, Manchester, Miami, Milan, Monrovia, Montevideo, Montreal, Seoul, Seville, Shanghai, Singapore and many others. Air France has hub airports at Paris Charles de Gaulle Airport and Paris Orly Airport. Air France is a subsidiary of Air France-KLM Group and also owns HOP!, Transavia France and Joon.

Air France has a number of codeshare and interline agreements with airlines including Aeroflot, Air Europa, Aircalin, Belavia, Flybe and Winair.

Air France is featured as one of the best airlines for value for money on our blog about the cheapest airlines! Read more here.

Passengers can check in at the airport using the Interactive kiosks which are available 24/7.

Online check in opens 30 hours before flight departure. Passengers can check in online on the Air France website or using the mobile app.

Alternative Airlines customers are now able to book extra baggage at the time of purchasing their Air France flight.

The number of hand luggage items permitted will vary from passenger to passenger depending on their class fare or Blue flying status. Hand luggage dimensions must not exceed 55cm x 35cm x 21.7cm including wheels, pockets and handles.

The number of checked baggage permitted per passenger will vary according to ticket fare and Blue flying status. Please check your ticket for your individual baggage allowance. The total dimensions for checked baggage must not exceed 158cm (62.2 in) including any pockets wheels or handles.

You can now pre-book Air France seats with Alternative Airlines! Check available seats and reserve your preferred seat ahead of time.

Air France is ready to welcome you in its lounges located in airports around the world. At Paris-Charles de Gaulle airport, enjoy a peaceful and relaxing break in the La Première lounge. In the Biologique Recherche centre, enjoy a personalised spa treatment from 20 minutes to 2 hours, including facials and body treatments tailored to the needs of frequent travelers.

In the La Première cabin, you will receive a tailored personalised service from our staff at all times. In your private suite, you can sleep soundly. Your comfortable upright seat transforms into a bed measuring 2 m in length. It has a memory foam mattress, a pillow and a large fluffy duvet. You will be given control of a complete, latest-generation entertainment system. Feature movies are available in HD, transforming your 24-inch screen into a veritable movie theatre.

From the moment they arrive at the airport, Air France Business Class passengers are treated to excellent customer service "à la française" to make them feel at ease throughout their journey. At Paris-Charles de Gaulle airport, customers can enjoy an exclusive Clarins spa treatment for both men and women and can avoid the usual airport hustle and bustle by relaxing in the Air France Business Class lounge.

Each Business Class seats with Air France is equipped with a personal screen so you can enjoy over 500 hours of entertainment on demand. Business Class passengers are also provided with hypoallergenic feather pillows, soft and cosy duvets and an amenities kit with Clarins skincare products.

Your Air France Business Class seat is designed for maximum comfort. Within seconds, you can convert your seat into a 2m/ 6.5ft in bed. When sitting, you can adjust the seat controls to find the most comfortable position for you. Air France Business Class seats mold to the shape of your body for optimum comfort and to give you the best night's sleep possible. Passengers can also easily work from their seats thanks to power outlets, reading lamps and noise cancelling headphones.

A fleece blanket and towel is included, plus an eyemask for sleeping and a refreshing towel.

In-flight entertainment is included with the latest movies each month and each seat has it’s own individual screen. Enjoy games, music and movies for the duration of the flight.

Each seat comes with a reclining seat back function with an adjustable footrest to give more space for your knees and legs. Various seat options can be chosen depending on the flight you are on.

Seat positioned at the front of the cabin - Ensure you are one of the first passengers to exit the aircraft.

Duo Seat on the A380 upper deck - Offers calmer area of the cabin. Benefits travelling with just one passenger next to you.

The meal that you receive on Air France will depend on your duration, departure time, class of travel and destination, meaning that you may receive one or more of the following : Breakfast, Lunch, Dinner or a snack.

For long-haul flights, passengers can purchase in advance their meal from the ‘A la carte’ menu, meaning the meal is personalised to your preference. These meals must be requested at least 24 hours before departure, on the Air France website under ‘Review/modify your reservations’.

Passengers with a specific dietary requirement can request a special meal for flights longer than 2 hours 35 minutes. The special meals offered are:

A choice of beverages are provided on all flights. This will include hot and cold beverages, and options for alcoholic or non-alcoholic beverages.

Please click on the logos below to find out more about airlines that fly similar routes to Air France:

Paris Charle de Gaulle is notorious for its luxury airport shopping opportunities. In particular, Terminal 2 has a great selection of household names within the fashion industry. 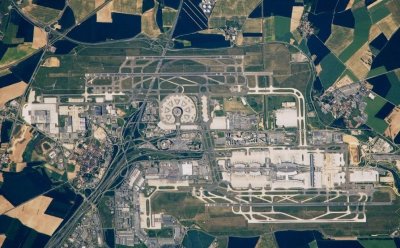 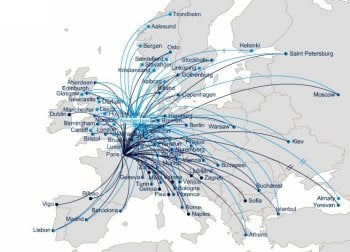 At Alternative Airlines we make the booking and paying for flights really flexible and tickets with Air France is no exception. To learn about some of the different payment options available for Air France services including Buy Now, Pay Later please visit our dedicated Air France - Fly Now, Pay Later page.

You can find a range of different offers on Alternative Airlines. Purchase last minute flights with Air France and find cheaper flights.

A video on the internet has surfaced of the French national team arriving into Paris after winning the 2018 FIFA World Cup in Russia this week on a plane flown over by Air France. The World Cup winners can be seen exiting the Air France aircraft, with goalkeeper and captain Hugo Lloris holding the trophy as fans warmly welcome them back to their home country.

France defeated Croatia 4-2 in the World Cup final, in what was dubbed one of the most entertaining World Cup tournaments in recent history. Read more about the great World Cup's of the past and the fantastic locations that hosted them.

Air France will operate a special one-off service to Lebanon early next month. The French airline will offer its passengers a one-off opportunity to fly from its airport hub in Paris, Charles de Gaulle Airport (CDG), to Beirut–Rafic Hariri International Airport (BEY), Lebanon. Air France will use a Boeing 787 aircraft to operate the one-off service, which will depart Paris on 10 julio 2018 and return the following day. The flight is listed to take 4 hours and 15 minutes outbound and 4 hours and 20 minutes return.

Air France have announced that they will be reducing the number of flights it operates between Paris and Tahran due to competetion and other changes in the market. The airine will only operate the route during the summer season, effective octubre 2018.

The airline released a statement that read "After two years of operations and faced with a weak economic and commercial performance, Air France took the decision to adjust this route's flight schedule to be in line with demand." Air France will instead give the service to their subsidary airline, JOON, which are based at Paris Charles de Gaulle Airport (CDG).

Air France-KLM has come to the conculsion that profits may fall this year due to strikes. Air France tickets may have suffered from the high demand for tickets thanks to robust economies, which has helped to ease the pressure on fares. The results came as Air France staff staged a 13th day of walkouts this year and come hours ahead of a crunch ballot for the group’s chief executive, who has said it would be hard for him to stay if staff vote against the pay proposal. Last year, the group made an operating profit of 1.488 billion euros, although that has been restated to 1.9 billion euros due to IFRS accounting rule changes. Air France believe that the walk outs may have cost the company 300 million euros.

Air France launched services between Paris CDG (CDG) and Taipei Taoyuan (TPE) on 16 abril. The French flag carrier will deploy its 280-seat 777-200s on the 9,872-kilometre sector, with the SkyTeam carrier planning to operate the route three times weekly. Flights will depart CDG on Mondays, Thursdays and Saturdays. Air France will face direct competition on the route from EVA Air, with it already offering a daily service between the two airports. See how this route launch FTWA performed against other airports from around the world.

China Southern Airlines Cargo has signed a Memorandum of Understanding (MOU) with Air France-KLM Royal Dutch Airlines-Martinair concerning a strategic partnership agreement that could eventually lead to an integrated commercial and operational cargo joint venture in the Europe-China market. The two sides have an existing commercial partnership dating back to 2015.

In a statement issued following the document's signing last week, Marcel de Nooijer, executive vice president of AFKLMP Cargo said: "We continuously want to create more value to our customers, and in doing so we are very excited to deepen the cooperation with our strategic partner China Southern Cargo. This new phase is good news for our customers."

Under the terms of the MOU, the Chinese and European cargo carriers will expand their existing cooperation and build on their mutual experience to connect their cargo business in China, Europe and beyond markets.

It will also allow either side to tap into the other's strengths, possibly through capacity sharing and bellyhold space agreements. China Southern is particularly strong in the China and the Asia-Pacific region with AF-KLM's potent in the Europe, Africa, and trans-Atlantic markets.

As such, the deal will combine China Southern Cargo and AF-KLM's cargo networks (bellyhold and main-deck capacity) to offer high-frequency services via hubs at Guangzhou, Shanghai Pudong, Paris CDG, and Amsterdam. It will also offer either party easy access to the other’s capacity and ground handling facilities at home base hubs, which may facilitate more efficient interline transfers. Lastly, the enhanced partnership is also expected to increase mail and express business opportunities between China, Europe, and the United States.

Where does Air France fly to?

Air France has a gigantic network of routes. The airline, which is the flag carrier airline of France, flies to 5 continents, serving more than 80 countries and around 190 destinations.

Air France has its major presence in the European market where it serves more than 90 destinations. The airline carried 46 million passengers in 2019.

What is Economy Light on Air France?

The Economy Class of Air France is divided into three subclasses: Light, Standard and Flex

Economy Light is the most basic and cheapest class of Economy which differs with Standard and Flex in a way that it doesn’t provide the passenger with any flexibility of changing or refunding the booking.

Which alliance is Air France part of?