Flights to and from China

Make an Air Guilin Booking and Find Some Amazing Deals

The airline began operating in junio 2016 with the first route flying from Guilin to Zhengzhou.

Air Guilin was part of the Guangxi Airlines group formed in 2013 and was also named as Guilin Airlines in 2015 until it was changed to Air Guilin. The airline was created in a bid to boost the tourism industry for Guilin.

Air Guilin flies to the following destinations including Shandong, Tianjin, Hebei, and Fujian.

Passengers are permitted one piece of hand luggage, weighing a maximum of 5kg. The size of this item must not exceed 20 x 40 x 55cm.

Air Guilin offer online check in for their passengers. This can be found here.

Air Guilin flies to the following destinations within China:

Please click on the logos below to find out more about airlines that fly similar routes to Air Guilin:

Guilin Liangjiang International Airport is located in Liangjiang, nearly 28 kilometres southwest of the city centre and Guilin is 9 miles from the airport. The airport has been recognized as the 33rd busiest airport in China, handling over 5 million people annually. The airport currently serves over 32 airlines to over 48 international and domestic destinations.

The airport features a 150,000 square metre car park, a 2,800 metre long runway and has received many awards for its efforts in expansion. There is a First Class and Business Class lounge as well as a medical centre. Other airlines flying to the airport include Shanghai Airlines. 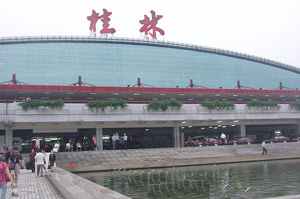 You can book your Air Guilin Flights with us at Alternative Airlines to be able to book fully in English. We guide you through the flight booking process in English, with a customer service team available 8am-8pm everyday (UK time) to answer any queries you may have in English.