Air KBZ is a domestic airline based in the capital of Myanmar (previously known as Burma), Yangon. It is a private airline owned by Kanbawa Bank and began operations in 2011. Air KBZ works closely with its partner, Myanmar International Airways, a friendship which blossomed in 2015 with a codeshare agreement. The airline commenced its first international flight from Yangon to Chiang Mai in 2016.

This airline can be directly ticketed through Alternative Airlines, through its relationship with Hahn Air.

The carry-on baggage allowance of Air Kbz is 55x35x25 cm per person. There is no weight limit listed.

The embarked baggage allowance of Air Kbz is 20 kg per person.

The fleet is currently comprised of six ATR72 aircraft. 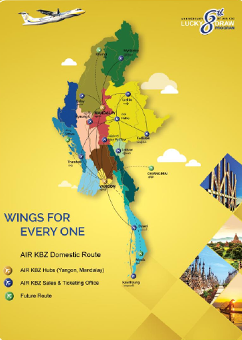 Air KBZ flies to around 20 destinations in Myanmar, including:

Please click on the logos below to find out more about airlines that fly similar routes to KBZ Air:

Yangon International Airport is the largest airport in Myanmar, located just 15km outside the capital city. In the last decade, major expansion plans have been put into place to compensate for the huge demand. The airport had a reputation for being the best in Southeast Asia and the primary airport serving that region, but due to political reasons, the airport has had to compete with huge superhubs across the sub-continent. In 2016, the airport capacity was expanded to accommodate 6 million passengers. There are plans to build a new, larger airport nearby. The airport is also the hub for airlines such as Myanmar Airways, Air Bagan, Asian Wings Airways and Golden Myanmar Airlines.