Make an Air Scandic Booking and Find Some Amazing Deals

Air Scandic ceased operation in 2018. To take a look at the similar airlines below.

Air Scandic (previously NextJet) was a Swedish airline, operating a number of domestic routes within Sweden and international routes throughout Scandinavia from their base at Stockholm Arlanda airport.

Under NextJet, Air Scandic had a codeshare agreement with SAS, interline agreements with KLM, Finnair, Air France, Qatar and Wideroe.

Air Scandic ceased operations in mayo 2018 after filing for bankruptcy.

Air Scandic passengers were allowed to take on one item of carry-on baggage. The baggage must couldn't exceed 5kg and wasn't allowed to be any larger than the maximum dimensions of 45 x 35 x 20cm.

Passengers flying Economy Class with Air Scandic were entitled to one item of checked baggage with a maximum weight of 23 kg. 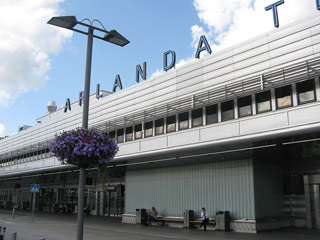 After filing for bankruptcy on 17 mayo 2018, NextJet has been purchased by a Swedish company owned by Olsen Group and Danish Air Transport and will now rebrand as 'Air Sandic'. The airline shut down operations in mid-May but will relaunch and serve some of the routes that it used to fly under the NextJet name.

Air Scandic will initially operate flights from Stockholm Arlanda to Mariehamn. It will later fly other routes which are yet to be announced.