Make an Amaszonas Uruguay Booking and Find Some Amazing Deals

Unfortunately, Amaszonas Uruguay ceased operations in enero 2021. But, don't worry. You can still book flights at Alternative Airlines flying to, from and around Uruguay with any of the airlines below, plus many more

Amaszonas Uruguay was a Uruguayan airline that flew domestically within Uruguay and internationally around South America since 2015. The airline was based at Carrasco International Airport, Montevideo and flies to over 5 different destinations within the South American continent.

The airline was a subsidiary of Linea Aérea Amaszonas and was created after Linea Aérea Amaszonas bought the rights to Amaszonas Uruguay's predecessor, BQB Lineas Aéreas and relaunched the airline. Along with Aeromas and Delbitur, the airline was one of the only airlines in Uruguay offering passenger flights. Although it only flew to a small number of South American destinations, it did reach other parts of South America through codeshare agreements with other airlines within the Amaszonas family.

In enero 2021, the airline ceased operations.

Carry-on baggage must not weigh more than 5kg and must fit within the dimensions of 45 cm x 40 cm x 20 cm. Each passenger was allowed a maximum of one carry-on bag per person.

On international flights, the airline gave a checked baggage allowance of 23kg for both adults and children (2–11 years).

On domestic flights, the airline gave a checked baggage allowance of 20kg for adults and 10kg for children.

The airline currently operated a fleet of Bombardier CRJ200ER, with a total of two active at the time that it stopped flying.

Carasco International Airport is the main international airport in Uruguay and was the hub airport for Amaszonas Uruguay. The airport is located in the country's capital city, Montevideo, within the Carrasco neighbourhood.

Carasco airport connects Uruguay with other South American cities, as well as European and North American destinations such as Madrid and Miami. 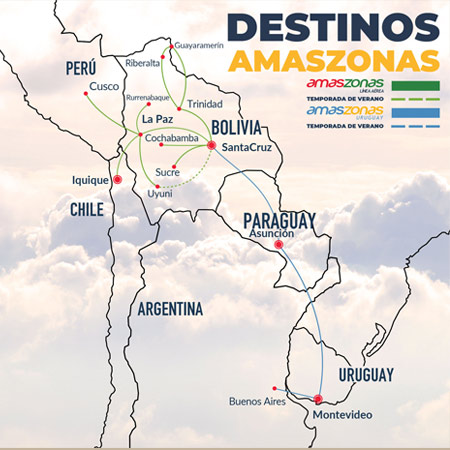 Other airlines that fly across Uruguay are Amaszonas, Avianca and American Airlines.