The airline launched in junio 2006 with a flight from Buenos Aires to Salta. It continued to offer scheduled and charter passenger flights across Argentina, Brazil and eventually the Caribbean. Between 2015–2017, the gained licence to fly in other parts of South America and began flying to destinations in Uruguay.

In octubre 2019, the airline temporarily suspended all of its operations. However, it resumed flights the following month with a smaller route network, focussing solely on domestic flights within Argentina.

As of diciembre 2019, Andes Líneas Aéreas has a fleet that's made up entirely of 5 McDonnell Douglas MD-83 aircraft. Overall, the airline has five of these regional jets within its fleet.

Any baggage that exceeds the excess weight and size allowance must be stored in the hold and the passenger will be subject to charges.

Passengers can check-in online on the Andes Líneas Aéreas website, clicking on the 'check-in' tab and entering their flight details. Online check-in is open between 48–3 hours before scheduled flight departure time.

Passengers can also check-in at the airport by visiting the airline check-in desk at the airport of departure. Airport check-in opens two hours before scheduled flight departure time and closes 45 minutes before.

Economy Class is the only cabin that the airline offers. The cabin is clean and relaxed and the airline's flight attendants carry out a professional service.

Economy Class seats are set out in a 3 x 2 formation and give the standard amount of width and legroom.

There are no in-flight entertainment system onboard Andes Líneas Aéreas flights.

Passengers are served a complimentary snack and drink on select flights. This includes a choice of cold and hot drinks, as well as a light salty snack.

Andes Líneas Aéreas doesn't have a frequent flyer program that rewards its regular passengers in place.

Andes Líneas Aéreas isn't part of an airline alliance at this time.

Jorge Newbery Airport (AEP) serves Buenos Aires, Argentina and is the hub airport for Andes Líneas Aéreas. The airport has one runway, one terminal building and facilitates flights from airlines flying within Argentina and other destinations throughout South America. It serves over 10 million passengers per year.

The airport is also a hub for Austral Líneas Aéreas, LATAM Argentina and Norwegian Air Argentina. 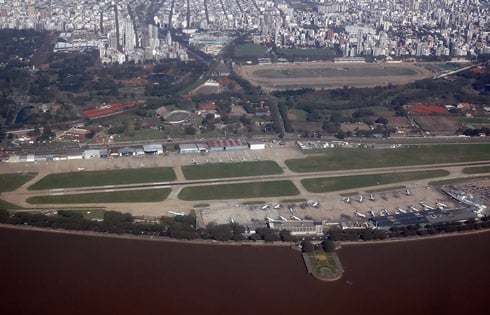