If your luggage exceeds the allowance, you will have to pay an extra charge in accordance with our excess luggage grid. REMINDER: Under no circumstances may your luggage exceed 32 kg. If it does, it will probably not be checked in the hold.

Transportation of golf bags, bicycles, diving equipment, skis, canoe-kayak, windsurfing boards, water skis, are accepted in hold and are subject to specific rates available in our excess luggage grid. Strollers (one per infant) and wheelchairs are transported free of charge.

E-cigarettes and spare batteries for their use are forbidden prohibited items.

You are entitled to carry a single piece of hand baggage.

ASL Airlines France are yet to offer online check-in.

It is recommended that passengers check in at the airport at least two hours prior to flight departure time. Check-in counters close 40 minutes before scheduled departure time.

The cabins are WiFi enabled, allowing passengers to stay connected. According to the length of the flight, a food and beverage service may be provided for free. Chargeable snack options will also be available. On some flights, a series of duty free products are sold.

Although ASL Airlines doesn't have a specific Business Class service, on board its charter flights it aims to provide customers with optimum comfort and entertainment. Passengers can access the airlines' in-flight WIFI service on the airlines' B737-700 aircraft and gain accesss to games, movies, documentaries, and magazines on their personal devices. Passengers will also be served free food and drinks in accordance with the duration of their flight.

Charles de Gaulle Airport is split into three separate terminals — Terminal 1, Terminal 2 and Terminal 3, from which all international and domestic services are shared across. When Terminal 2 was originally built, it exclusively facilitated services flown by Air France. However, over time, the terminal has welcomed other airlines and it now facilitates a large number of different airlines. Terminal 3 is mainly used for low-cost carriers, as well as cargo services.

Other airlines that use Paris Charles de Gaulle Airport as their hub include Air France and XL Airways France. 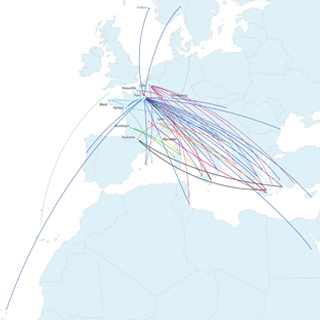