Make an Atlantic Airways Booking and Find Some Amazing Deals

Atlantic Airways is the national airline of the Faroe Islands and flies international passengers flights from its headquarters at Vagar Airport, as well as domestic helicopter flights in Denmark.

The airline was established in 1987 and launched flights in 1988, giving Faroese people the ability to fly to Vagar to Copenhagen for the very first time. The airline launched its first international flights in 1995 to Reykjavik and Narsarsuaq, both in cooperation with Air Iceland. It has since built its route network out to fly to destinations such as Barcelona, Edinburgh and Paris.

Today, the airline flies to more than 10 destinations directly.

Visit our guide to flying to the Faroe Islands for more information about flying to this incredible destination.

The airline has two separate fleets — a helicopter fleet and a regular airplane fleet.

Its helicopter fleet consists of the AgustaWestland AW139 helicopter and is used for domestic services flying charter and scheduled flights from around Faroe Island/Denmark.

Its airplane fleet consists of planes from the Airbus A320 family.

The airline has around five aircraft within its fleet altogether.

The airline operates many international passenger services from its hub at Vagar Airport, to destinations in Europe, as per the table below:

The baggage allowance applies to all flights operated with regular fixed-wing aircraft.

In addition to this, passengers can carry a small personal item with them, such as a laptop and bag. 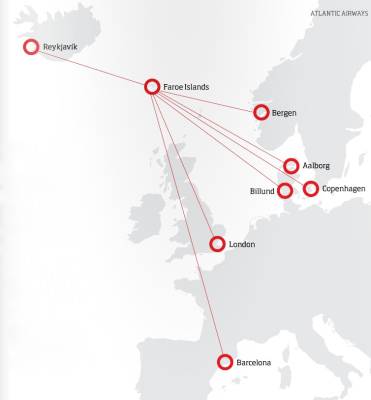 Passengers can check-in for their Atlantic Airways flight by visiting the Atlantic Airways check-in page, click the 'check-in' tab and entering their last name and reservation number. Online check-in is available from all airports, except for Aalborg (AAL).

Airport check-in can be completed at the airport of departure by visiting one of the airline check-in desks with the necessary travel documents.

At the following airports, passengers can check-in using a self-service kiosk:

Passengers should arrive at least two hours before their flight time to ensure there is enough time for check-in.

The airline offers standard seating, with one class type — Economy Class. However, within this class are three fare options: low, flex, and flex+. These fares determine whether the ticket is refundable, changeable, as well as benefits such as the amount of baggage allowance, speedy boarding passes and lounge access.

Passengers can enjoy a tasty meal from the airline selected menu, including the popular sandwich options. or pass the time with the airline in-flight entertainment system or airline magazine, Atlantic Review,

*Service may differ for helicopter flights

Passengers can connect their own personal electronic device (laptop, tablet, mobile) to Atlantic AirFi, which gives passengers access to a range of games, movies, TV shows and the news from the Faroe Island.

All passengers need to do is connect to the Atlantic AirFi network and they'll be able to stream all type of entertainment, completely free of charge!

Passengers can purchase meals, snacks and drinks once in-flight, with meals available to pre-order on select flights.

The airline offers a range of sandwiches and wraps, which differ depending on the day of the week, as well as salted and sweet snacks and hot, cold, alcoholic and soft drinks

Atlantic Airways offers exclusive benefits and awards of the Súlubonus programme offered to its customers. Súlubonus members will earn points when travelling with Atlantic Airways, which can be used to purchase bonus flights. Depending on the number of basic points, passenger membership can be upgraded from the basic level to GOLD or BASALT level, which both have a range of extra benefits

Atlantic Airways isn't part of an airline alliance, however, it does have codeshare agreements with both Air France and KLM.

Vágar Airport is the airport serving the Faroe Islands, a self-governing territory of Denmark. Vagar Airport is used as the main operating base for Atlantic Airways.The airport has one runway, one terminal building and handles over 400,000 passengers per year.

Atlantic Airways is currently the only airline based at the airport. SAS Scandinavian Airlines also flies to/from the airport. 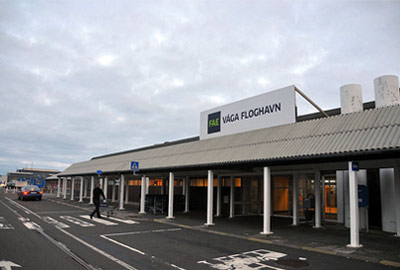 Beginning this summer (2020), Atlantic Airways will begin flying nonstop between London Gatwick (LGW) and Vágar (FAE). The route will operate just once per week on Tuesdays between June the 23rd and Aug the 11th, 2020.