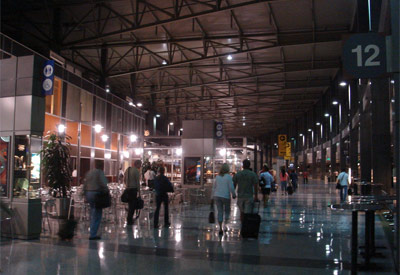 Austin-Bergstrom International Airport, also known as ABIA, is an airport located in Austin, Texas. Despite officially being an international airport and having the ability to facilitate international flights, the airport is primarily used to connect Austin with other parts of the USA, with only a few flights travelling internationally to Europe and other parts of North America.

Austin-Bergstrom was built in 1999 to replace Austin's previous main airport Robert Mueller Municipal Airport. Since opening, the airport has undergone one major expansion in 2015, with updated facilities and an expanded arrivals area. The airport has plans to majorly expand the airport again by 2040, with a new main terminal, a new satellite concourse and a new runway.

What is the airport code for ABIA?

The airport code for Austin-Bergstrom International Airport is AUS.

Austin-Bergstrom International Airport is located in Greater Austin, Texas. The airport is between a 20–50-minute drive away from downtown Austin.

The airport has an array of facilities, with airport essentials and things to keep passengers occupied for both short and long layovers. 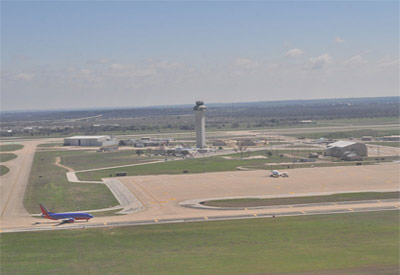 Austin-Bergstrom has plans to build a new a 3,000 m runway as part of its major expansion plan by 2040.

There are two terminals at Austin-Bergstrom International Airport. The Barbara Jordan Terminal (also known as the Main Terminal) and the South Terminal. The terminals are not connected and have to be entered from separate roads on different sides of the airport.

The Barbara Jordan Terminal, also known as the Main Terminal, is the larger of the two terminals at Austin-Bergstrom. It handles most of the airport's traffic and can facilitate domestic and international flights.

The terminal is also home to all of the airport's lounges and is where the airport parking facilities are located.

The South Terminal is a smaller airport that is primarily used by Allegiant Air and Frontier Airlines for US domestic flights. Although the airport is mainly used for domestic flights, it does have the capability to facilitate international flights and has previously been used by Mexican airline VivaAerobus.

The South Terminal underwent a major renovation in 2015, where it was closed for a year. Upon its re-opening in 2016, the airport had a new retro-look and a selection of new facilities.

Airlines that fly to ABIA

There are currently no airlines based at Austin-Bergstrom International Airport. Although, Delta Air Lines and Southwest use the airport as a focus city.

Below is a table of all the airlines that fly to/from Austin Bergstrom.

Below are the top destinations for each airline by passenger traffic.

How to get to Austin-Bergstrom International Airport

There are several rental car companies situated at the airport, as well as parking facilities connected to the Barbara Jordan Terminal.

The airport can be accessed off Highway 71.

Taxis are readily available in Austin. You might be able to flag down a taxi in busier areas but you'll usually have to call ahead or get the person(s) that is in charge of your accommodation to order one for you.

Here are some taxi company numbers that are recommended by Austin-Bergstrom airport on its official website:

Capital Metro bus route 20 travels between the airport and Manor Road via Downtown Austin. The bus runs from 5am–11pm on weekdays, 6am–11pm on Saturdays and 6am–10.30pm on Sundays. Buses are scheduled to leave every 15 minutes.