Make an Azores Airlines Booking and Find Some Amazing Deals

Azores Airlines, formerly known as SATA Internacional, is a Portuguese airline that is based in Ponta Delgada. The airline's hub is at Ponta Delgada Airport (PDL) and it flies to destinations across Portugal, parts of Europe, as well as to North America and Central America. Azores flies to more than 20 destinations overall.

Azores Airlines was founded in 1990 under the name OceanAir and launched flights the following year. In 1994, the airline was partly-acquired by another Portuguese airline, SATA Air Açores, which fully-acquired the airline as a full subsidiary in 1998 and rebranded it as SATA Internacional. As it expanded its route network with international flights to destinations outside of Portugal and the Azores, the airline continued to use the brand and name SATA Internacional until 2016, when it rebranded as Azores Airlines — the name it still uses today.

In 2020, Azores Airlines began a partnership with Cabo Verde Connect Services that allows for Cabo Verde connect to charter Azores planes for its own flights travelling in and out of Cape Verde.

Did you know you can pay for flights in instalments? Check out our Fly Now, Pay Later - Azores Airlines page.

The airline's fleet consists entirely of Airbus aircraft. The airline has more than five planes within its fleet at one time, with models such as the A320-200, A321neo and A321LR.

The free carry-on baggage allowance differs depending on the cabin class that passengers are flying in and the route that they're flying.

The checked baggage allowance for passengers will depend on the cabin class and route that the passenger is flying on.

Babies are allowed 10kg of free baggage on all flights.

Goldsky passengers are given an additional +10 kg, on top of the regular allowance that their cabin class and route allows.

On flights leaving from Canada and the US, online check-in closes 75 minutes before scheduled flight departure time but is only open from 24 hours before.

Airport check-in can be completed by visiting one of the airline check-in desks at the airport of departure. Airport check-in times differ depending on the which airport passengers are departing from.

On inter-island flights (with Azores), the check-in closing time is 30 minutes before departure.

On flights departing from Lisbon, the check-in closing time is 60 minutes before departure.

On domestic and European flights, the check-in closing time is 45 minutes before departure.

On intercontinental flights, the check-in closing time is 60 minutes before departure.

Economy Class is one of two cabin classes that Azores Airlines offers and is the most basic of the two. While the cabin is more simplistic than Business Class, it is a more affordable option.

In outgoing flights from Portugal, executive class meals will be prepared by the local chefs. These are meals specifically designed for SATA Business 'Executive' Class flights, combining typical ingredients from the Azores and Madeira with international and contemporary cuisine to provide a unique sensorial experience. Meals are served in modern chinaware of contemporary design.

Prior to boarding: The SATA lounges enable passengers greater relaxation, with more modern and comfortable furniture, of elegant and sober design. Priority baggage and check-in are also provided.

Business Class seating positions have an average distance between rows of 47cm in Airbus A310 aircraft and 33cm in Airbus A320 aircraft, providing passengers with greater comfort and relaxation.

Passengers can connect their personal electronic devices to Azores Airlines' Cabin Media Player app and enjoy a range of movies, music and children's entertainment on the comfort of their own device.

To connect to Azores Airlines' in-flight entertainment system, passengers must download the Cabin Media Player app on either the Google Play or Apple App store before their flight. Once in-flight passenger must connect to the AirAzores_wifi network, open the Cabin Media Player app and purchase an internet package to begin enjoying the airline's entertainment.

*Please note that in-flight entertainment is only available on flights operated by Airbus A321neo aircraft.

Passengers are served complimentary food and drink on all flights, excluding flights that fly between the Azores islands.

Ponta Delgada–João Paulo II Airport is the main airport in the Azores and the hub airport for Azores Airlines. The airport has one runway, one terminal building and handles around two million passengers each year.

Currently, Azores Airlines is the only airline based at Ponta Delgada Airport. However, other airlines that fly to/from the airport include Norwegian, Ryanair, SATA, SWISS and TAP Air Portugal. 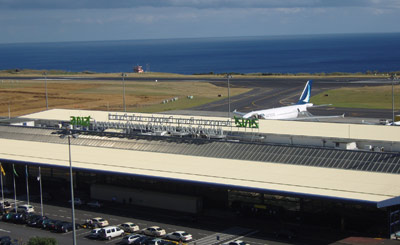