Tashi Air and thus Bhutan Airlines is owned by and is a subsidiary of the Tashi Group, which was founded in 1959 by Dasho Ugen Dorji.

Bhutan Airlines operates its private flight schedule on regular routes to India, Thailand and Nepal, from its headquarters in Thimphu, Bhutan.

In addition to the current destinations offer, Bhutan Airlines currently have plans to develop routes to the following destinations:

The onboard service and food are to a high class. Hot and cold beverages are also provided on the flight. There's in-flight shopping available on board for perfumes, jewellery, watches and alcohol.

Economy Class seating is comfortable with a generous amount of legroom.

Bhutan Airlines crafts their own food from the finest ingredients made by executive chefs. Hot and cold beverages are served in-flight. Priority boarding is also given allowing passengers to pass through immigration.

Seats in Business Class are even more comfortable with extra legroom for passengers to stretch.

Carry-on baggage for Bhutan Airlines has to be 55 x 40 x 20cm or less, weighing no more than 7kg.

One personal item, such as a laptop case or briefcase is also permitted in addition to the carry-on bag.

Bhutan Airlines allocate checked baggage depending on the route flying and the class of ticket purchased.

One exception for this is for passengers who are flying from Gaya - Paro. For this route, checked bags must be less than 30kg for Business Class, and 20kg for Premium Economy and Economy Class.

Bhutan Airlines will charge for baggage which exceeds the free allowance by either weight or dimensions.

Bhutan Airlines are yet to offer online check-in, or web check-in, for their flights.

Passengers flying with Bhutan Airlines will need to check-in at the Airport prior to departure. The airline recommends that passengers arrive at the airport 2 hours before flight departure.

The standard ticket is Economy Class, but this can be upgraded to Premium Economy or Business Class.

Please click on the logos below to find out more about airlines that fly similar routes to Bhutan Airlines: 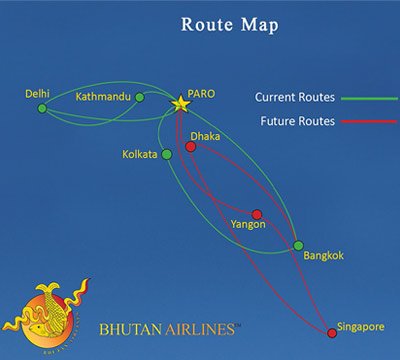 Bhutan Airlines, currently operate their services on the following fleet of aircraft:

Paro Airport is one of four airports in Bhutan and is the only one that operates international flights. Due to its scenic location in the valley of the river Paro Chhu and being surrounded by mountains, flights are only allowed to take-off and land from this airport when there is good visibility from weather and daylight hours.

The airport was initially just an airstrip, built in 1968, which was later extended and developed in 1990. In addition, a terminal building was constructed in 1999.