Discover more about the Boeing 747, including technical specifications, features and which airlines use the 747 'Jumbo Jet'.

The Boeing 747 is a large, wide-body commercial jet airliner aircraft, with four wing-mounted engines. It is used as both a passenger carrier and cargo carrier. The 747 first flew in 1970 with Pan Am and was the first wide-body airplane to be manufactured by Boeing - it was the first plane to be dubbed a 'Jumbo Jet'. As of junio 2019, 1,554 have been built. Europe is the biggest region for 747's currently in service. British Airways are a primary operator of the 47, along with Lufthansa, Korean Air, and Atlas Air (cargo). 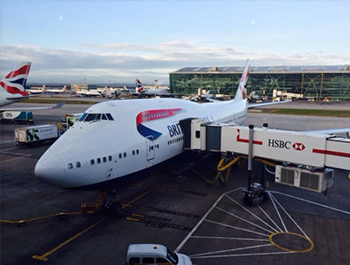 The distinctive forward part of the aircraft, with its hump upper deck, make the aircraft easily recognisable. The 747 has a double-deck configuration for the first part of its length. The upper deck of this 'hump' was designed to be able to easily convert into a cargo carrier and serves as a first-class cabin or to provide extra seating.

The 747-8 is the latest and third generation of the 747. The passenger model (747-8 Intercontinental, or '747-8i') was first delivered in 2012; as of julio 2019, there are 47 orders for a passenger version of the aircraft. The 747-8 is the largest commercial aircraft built in the United States and features enhanced design features, including a curved stairway, a more spacious passenger entrance, and improved fixtures. Lufthansa is the largest operator of the 747-8i.

Technical Spec of the 747

Passenger Features of the Boeing 747 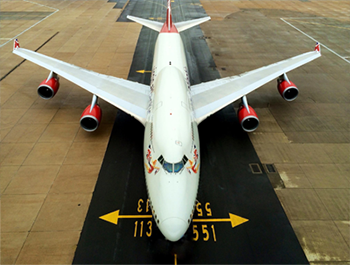 Extra headroom over the seats elevates the space and enhances passenger comfort. The sculpted celling with LED lighting creates an open, wam, and relaxing space. A variety of colours and intensities are used to simulate natural light, gradually changing through a spectrum of lighting from sunrise to sunset. The lavatories are also designed to enhance the functionality and comfort of the space.

New larger overhead bins pivot for easy access and provide every passenger with plenty of room to store their baggage. Storage bins store into the ceiling so are out of the way. New latches also make opening and closing the bins easier.

Enjoy a 'private jet' experience, the more spacious premium seating area is an ideal space to relax. Open, bright, and with plenty of space, look forward to an exclusive flying experience on the upper-deck of the plane.

The 747-8 features an exclusive and private first class cabin. Free from any passing traffic, the private cabin has Dreamliner-inspired cabin enhancments. Many cabins feature a private bar.

Which airlines use the Boeing 747?

As well as a number of Cargo Carriers, the following Passenger Carriers currently operate the 747:

How can I book flights on the Boeing 747?

When you search for flights through Alternative Airlines it is quick and easy to see which plane will be used on each flight. Just click on the details icon on the flight that you want to search to see if it will be operated with a Boeing 747. You can visit our page 'what aircraft will I fly on?' for more information on how to do check which aircraft you will be flying on.

How many Boeing 747 are there?

The 777 is a 2 engined commercial wide-body airliner also made by Boeing. The 747 is larger and offers a premium space for passengers. Onboard experience is comparable on both the 777 and 747, but being more fuel efficient makes the 777 perfect for high demand routes. The 777x-9 has been designed to replace the Boeing 747.