Find out information on the Boeing 777, including the 777 classics, the new-generation of 777s and the airlines that use them.

The Boeing 777 is a wide body twin-engine aircraft family created by Boeing. The Boeing 777 is typically used on medium-haul and long-haul flights and can carry between 314–396 passengers, depending on the class-layout and the model variant. Overall, the Boeing 777 has five active variants that are used for commercial flights.

Boeing is currently producing a third-generation series of the Boeing 777, which will include two new planes, named the 777-8 and 777-9. Together, these will be known as the Boeing 777x series. The Boeing 777x jets will take features from the Boeing 787 and also have updated GE9X engines, more cabin space, more seating capacity and a range of other updates. The 777x series is expected to be released in the coming years.

Technical Spec of the Boeing 777 Family

Features of the Boeing 777

The aircraft offers an in-flight experience puts comfort and convenience first. It has a modern in-flight entertainment system, comfortable seats and a spacious cabin.

What makes the Boeing 777 experience stand out the most is its attention to detail. One example of this is its dynamic LED lighting system, which lights up the cabin in a different colour depending on whether the flight is in the stages of boarding, meal service, night, prelanding or cruising.

The Boeing 777 has an award-winning interior design. The aircraft is specifically designed to be look great while maintaining its practicability. The high overhead lockers and ceilings allow passengers to see a panoramic view of the cabin and also allows taller passengers to comfortably walk around the cabin and get up from their seat.

The Boeing 777 is a pioneer in aircraft design. The jet was the first major aircraft to be digitally designed. It uses advanced materials and powerful engines to produce a reliable and efficient aircraft.

The Boeing 777 has stood the test of time thanks to its continuous improvements. The 777 has three-generations of aircraft with seven variations overall (both released and unreleased). Boeing continues to improve the aircraft and release newer planes, suiting the needs of both passengers and airlines.

Which airlines use the Boeing 777?

The Boeing 777 is used by airlines from all around the world. Currently, the airline with the most Boeing 777s within its fleet is Emirates, which has nearly 300 777s altogether.

Here's a list of all airlines that use aircraft within the Boeing 777 family as of septiembre 2019. 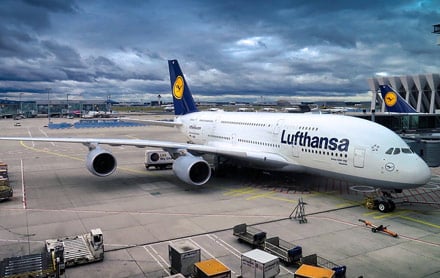 How can I book flights on the Boeing 777?

You can buy flights on an airline using the Boeing 777 quickly easilly at Alternative Airlines. We allow you to see which plane will be used on your flight during the booking process before you even select it. Simply click on the details icon on the flight that you want to search to see if it will be operated with a Boeing 777 or any other aircraft.

Visit our page 'what aircraft will I fly on?' for more information on how to do check.

How many Boeing 777 are there in service?

How much does the Boeing 777 cost?

The average price of planes within the Boeing 777 family is as follows:

How many passengers does the Boeing 777 carry?

The Boeing 777 is one of the safest aircraft ever produced and among Boeing's safest planes. In 2016, Boeing released statistics that stated that only 0.4% of the 1,412 Boeing 777s that had been produced had ever been involved in a crash or incident that left the plane damaged upon repair. This includes fires and other incidents that occurred when the plane was not in operation.