Pay for your flights with Iranian Rial (IRR) at Alternative Airlines. We allow you to search, buy and view flight prices in Iranian rial for the whole booking process — regardless of where in the world you're buying from.

How to Book flights in Iranian rial

Open our currency changer by clicking on the default currency highlighted in red at the top of the page. Search for Iranian rial in the search bar and click on the IRR symbol to change currencies.

Fill out all the details for the search you want to make and click 'search flights'.

On the next page, you'll be able to see all available fares with the price displayed in Iranian rial. Select the flight that you want and confirm your selection.

Once you've selected your flight, just follow the instructions on the screen to complete your booking and pay with IRR. 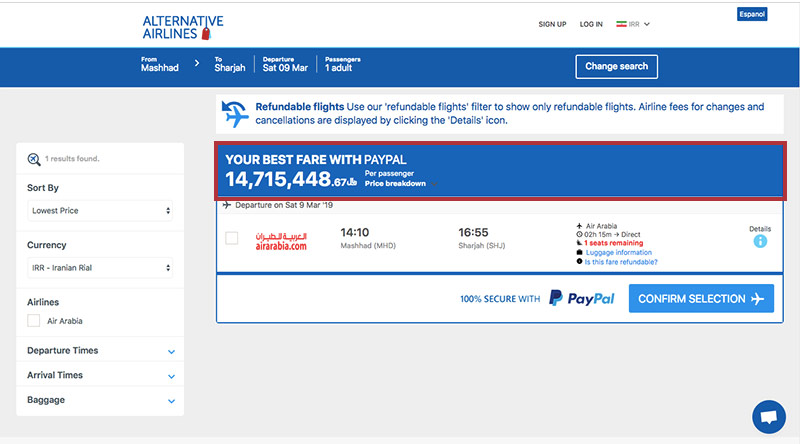 The Iranian rial is the primary currency used in Iran. The first use of the Iranian rial dates back to 1798. However, in 1825, the rial was discontinued and the country started using the qiran. Eventually, in 1923, Iran went back to using the rial, but as an updated currency. Iran has used the second Iranian rial as its national currency ever since.

Although Iranian currency is always exchanged and written in the rial, most Iranians refer to the value of money and the prices of goods in 'tomans'. A 'toman' used to be an official currency in Iran, but is no longer used. One toman is equal to the value of 10 rials.