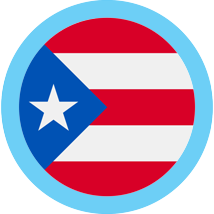 San Juan is a great place to travel with lots of culture to discover. Why not take a bite of the delicious cultural foods in San Juan - Arepas de Coco, Mofongo, Pastelón and Chicharrones de Pollo. San Juan has great night life, the Isla Verde resort strip is known for it's bars, nightclubs and casinos. Enjoy and dance salsa, merengue and bachata to the famous Latino music - we know you have great dance moves in you.

If you live in the United States, there will be a range of different payment plan options available to you such as Klarna and Afterpay. To find out more, check out our payment plans page.

What Airlines Fly Between Orlando and San Juan?

Direct Flights: For an easier and efficient travel, take a look at the following airlines that operate direct flights between Orlando and San Juan. You can also book flights with a layover with other airlines such as American Airlines, with a journey time of 5+ hours.

Southwest airlines is a major US airline provider operating to over 100 destinations. The airline is based in Dallas Love Field airport and flies across the US, North America and South America. During peak season Southwest operates 4,000 daily flights.

Frontier Airlines is a American low-cost carrier, located Denver, Colorado, USA. The airline operates to over 100 destinations in the United States, Canada, Puerto Rico, Dominican Republic and Mexico. Frontier Airlines is known for its eco-friendly actions - Frontier was awarded as the industry’s most fuel-efficient airline.

Jetblue airways also known as Jetblue is a US low-cost carrier headquartered in the Long Island City neighbourhood of the New York City borough of Queens. Jetblue airways flies to over 100 destinations across the United States, the Caribbean, Central and South America and Europe. Jetblue operates over 1,000 daily flights.

Use the search form at the top of the page to start searching for flights with any of these airlines and more between Orlando and San Juan.

You can also use our airline filters to only view flights with a specific airline.

Orlando International Airport (MCO) is a major public airport located in Orlando, Florida, United States. Orlando International Airport is one of the busiest airports in the state and 10th busiest airport in the United States. This airport serves as a hub for Silver Airways, Avelo Airlines, Frontier Airlines, JetBlue, Southwest and Spirit Airlines.

How far is it from Orlando to San Juan?

Which airlines fly from Orlando to San Juan?

There is plenty of choice when it comes to airlines that fly between Orlando and San Juan. You can fly directly from Orlando to San Juan with Southwest, Frontier, Jetblue and Spirit airlines which consists of a 2 hour 50 minutes+ journey. There are other airlines that travel from Orlando to San Juan (such as, American Airlines), however the plane journey will take longer (approx. 5 hours+). Simply use the airline filter when searching for flights and choose the airline you wish to travel with.

Can I pay for flights between Orlando and San Juan in instalments?

Absolutely! With Alternative Airlines you can book flights between Orlando and San Juan and spread the cost of your flight ticket overtime. We know how much you want to travel to San Juan, Puerto Rico and discover all the cultural foods, so we have partnered up with many payment plan providers. There are a range of payment plan options you can use such as, Klarna, Afterpay, Affirm, Uplift and PayPal Credit.

Why should I book flights from Orlando to San Juan with Alternative Airlines?

There are so many benefits of booking with Alternative Airlines! First of all, we have 40+ payment methods that you can use to secure your flight between Orlando and San Juan such as Fly Now Pay Later and Crypto. We also have a lovely customer serivce team who are always willing to help!