Use the search feature above to browse flights from over 600 airlines and pay for them using Bitcoin. You'll find many airlines that accept Bitcoin through us as we accept Bitcoin as well as many other Bitcoin Alternative payments.

Start your Bitcoin (BTC) Travel or crypto vacation with Alternative Airlines today by buying with Bitcoins.

2. Airlines that accept Bitcoin as a payment

3. Why use Bitcoin to buy flights?

5. How do I pay for flights with Bitcoin?

Search for flights from hundreds of different airlines and pay using Bitcoin with Alternative Airlines. Bitcoin is a form of cryptocurrency that uses the symbol '₿' and it is a type of money that is completely virtual. The digital currency is currently the leading cryptocurrency in the world and it is used by around 5 million unique users. Bitcoin was invented in 2008 and was initially released in enero 2009. The digital currency is decentralized, meaning that it isn't controlled by banks or a government.

Bitcoin is a file stored in a digital wallet and can be sent (whole or as a part) to people, or used to pay for products and services. Each transaction made with Bitcoin is recorded on a public list, constructed using blockchain technology, which makes the history traceable, meaning it's secure and stops people from spending fake coins they do not own.

Bitcoins are originally created with a computer using a process called mining, where computers have to work to solve complex problems and are rewarded with Bitcoins when solved, but you can buy them with real money or by exchanging them for items.

Which countries can I buy flights in Bitcoin from?

You can use any country with Alternative Airlines by making your Bitcoin payment. Make sure you are searching for flights in one of the currencies or countries that accept Bitcoin are listed below:

To change the currency that you're searching in, use our currency changer at the top right-hand of the screen before you search for your flights.

Airlines that accept Bitcoin as a payment

Why use Bitcoin to buy flights?

Because of the Blockchain technology, users who make payments with Bitcoins are anonymous. This is because the levels of encryption meaning that although every purchase made with Bitcoin is traceable, it can never be associated with a personal identity. This is much like the anonymity of cash purchases.

Bitcoin is simply peer-to-peer, with no interruptions of transactions from governments or banks. This means that if you have the funds available, paying with Bitcoin is seamless and uninterrupted.

Bitcoin users can make their buying with Bitcoins anywhere providing they have access to the internet of course. This means that you don't need to have a physical wallet or card with you and can instead simply log into your e-wallet to quickly and easily pay for your Bitcoin travel tickets. This is also useful if you are purchasing flights when you are not at home, or have lost your physical cards and need a way to pay for flights.

If you want to discover some of the many other reasons to buy with BTC on your next travel, have a read of our blog on the 10 Reasons why you should Buy Flights with Bitcoin.

How to pay for my flights through Bitcoin?

Alternative Airlines accepts Bitcoin and many other cryptocurrencies for air travel and there aren't many travel companies who accept Bitcoin. It's a great and flexible way to pay for travel. Just select 'Cryptocurrency payment' at checkout to begin paying for your flights with Bitcoin. To find out more on how to pay with Bitcoin for your flights please see below within the 'How to pay with Bitcoin' section. Find out more by heading over to the beginner's guide to Bitcoin at 99Bitcoins. If you would like to learn where to buy bitcoins visit Buy Bitcoin Worldwide and then head over to UseTheBitcoin to discover online stores that are accepting BTC payment.

Can I buy flight tickets with my BTC?

How to pay for flights with my BTC?

The way you can make your buying with Bitcoins for your flights is by making a search and selecting flights on Alternative Airlines, at checkout you can select 'cryptocurrency payment' and 'Bitcoin' at checkout. Depending on the currency that you're searching for, you'll be able to complete your payment through one of our cryptocurrency payment providers Utrust or crypto.com. This is how to pay with Bitcoin for the flights that you really want.

Is it safe to buy with my BTC?

Yes, it is safe to buy your flights with Bitcoin this is because of our integration with Utrust exchange and crypto.com who have made it an extremely safe way to pay. Utrust exchange offers buyer protection on all purchases so that you have peace of mind if there are any complications when you make your buying with Bitcoins. Along with this, crypto.com has control over each layer of its system and has a number of measures in place to protect all of its users' data and privacy. In general, buying with Bitcoins is safe, secure and harder to track than regular payments.

Why should I buy flights with my BTC?

You should buy your flights in Bitcoin it's a quick, safe and convenient way to pay. Making a booking using Bitcoin through Alternative Airlines means that you can take advantage of the constant promotional deals and discounts that can be used on over 650 global airlines. Check out our blog to find out more reasons why you should buy flights with Bitcoin.

Where can I spend my BTC?

What can you buy with Bitcoin?

There are many things you can buy with Bitcoin whether that is tangible or intangible. At Alternative Airlines, we allow you to buy plane tickets in Bitcoin so you can travel to your next holiday destination.

Expedia and the likes of many other travel agents and airlines don't currently accept Bitcoin. Expedia began accepting Bitcoin for payments in 2014 and in 2018 Expedia decided to stop accepting Bitcoin as a form of payment. A lot of people are searching for this question 'does Expedia accept Bitcoin?', the good news is, that we at Alternative Airlines offer flights that you can purchase with Bitcoin.

Yes, Bitcoins transactions are traceable which means each payment is tracked and recorded in a blockchain network as a wallet address.

What is Bitcoin Air?

Bitcoin Air (XBA) focuses on being the first suitable alternative to Bitcoin (BTC). It doesn't fully relate much to 'Buying flights with Bitcoin' or 'airlines that accept Bitcoin' even though it has 'air' within the name. However, Bitcoin Air focuses more on bringing real-life change to the world by offering the first Carbon Credit Asset-Backed currency and produce clean air initiatives and aid in decreasing the Human Carbon Footprint by correctly regulating and making new Emission Reducing Programs and Technologies.

We have a range of other digital currencies that are Bitcoins alternative also known as 'altcoins' which you can use to book flights with that includes Ethereum, Dash, USDT, Litecoin, Ripple, UTK, CRO and many others. See all the cryptocurrencies including Dogecoin (DOGE), Cardano (ADA) and Binance Coin (BUSD) you can use to find the best alternative to Bitcoin and book your crypto tickets and enjoy your Bitcoin alternative travel.

How do I pay for flights with Bitcoin?

Buying flights with Bitcoins is really simple! Follow our step-by-step guide on how to pay with Bitcoin and book your Bitcoin travel. Make your BTCtrip, even more, simpler by selecting the airlines that accept Bitcoin and booking through Alternative Airlines. Don't want to make your purchase with Bitcoins? That's not a problem as we have many other Bitcoin alternative for you to choose from.

Enter the destinations, dates and the number of passengers flying into the Alternative Airlines search form and click 'search flights'.

Select the flights that you wish to fly on and click 'confirm selection'. 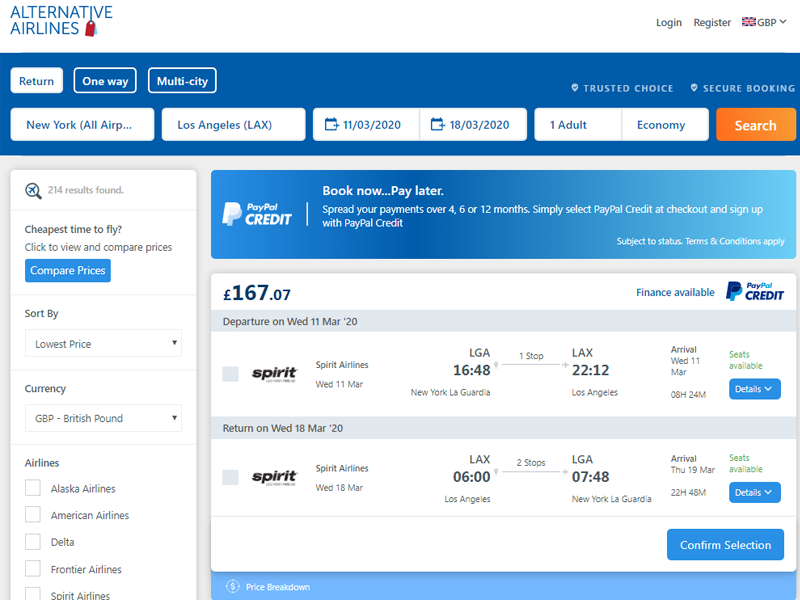 After you've inputted in the passenger details, scroll down to view the payment options that are available with Alternative Airlines. To begin financing your flight travel with Bitcoin, select 'Cryptocurrency payment'. 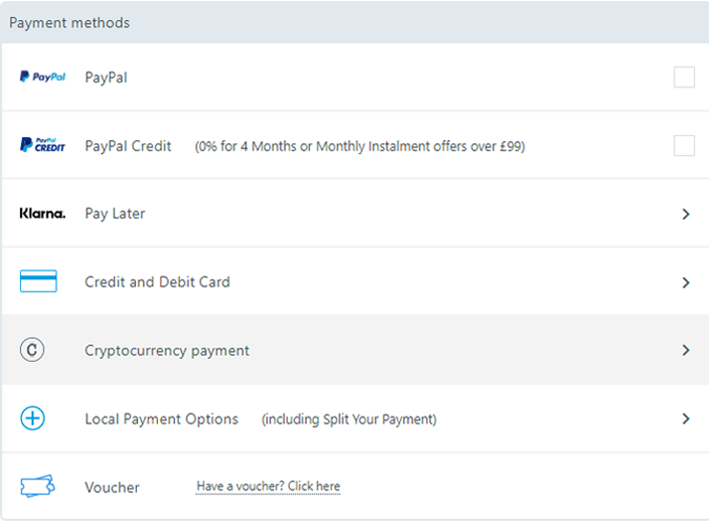 Select 'Bitcoin' as your payment from the list of the other 7 Bitcoin alternative tokens. Once Bitcoin has been selected and you wish to continue, select 'confirm payment at the bottom of the page. 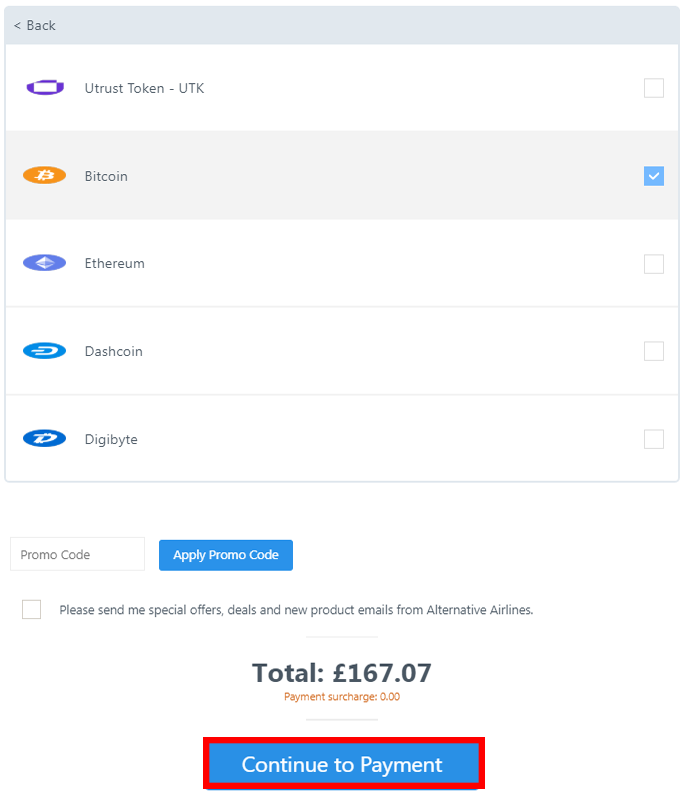 Follow the instructions on-screen to finalise your Bitcoin flight payment. You have now made your payment in Bitcoin with airlines that accept Bitcoin. Now you know how to pay with Bitcoin for flights and are now all set for your next Bitcoin travel. If you want to learn how to buy your flights through our other Bitcoin alternative tokens click on the following links: Ethereum, Dash, USDT, Litecoin, Ripple, UTK, CRO to discover how to do this and select the best Bitcoin alternative tokens.

As the leading BTC Travel flight booking platform, Alternative Airlines always strives hard to bring our customers a smooth and easy booking experience. Pay for your flight vacation from and to anywhere in the world using Bitcoin or a range of Bitcoin alternative.

You can also find out why you should buy plane tickets with Bitcoin through Alternative Airlines by looking at the testimonials from our customers who have already made their flight ticket payment with Bitcoins.