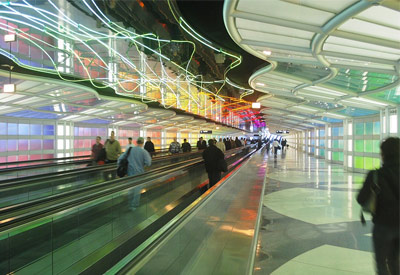 The airport was the first major airport built post World War II and was the world's busiest airport from the early 1960s up until the late 1990s. Today, it remains as one of the top 10 busiest airports in the world, with over 80 million passengers served per year.

Chicago O'Hare underwent a major expansion in 1962 with the creation of Terminal 2 and 3. It expanded again in 1985 when United built a new Terminal 1 that featured two concourses. Additional terminals were built in the years following. The terminals are numbered 1–5, with Terminal 4 no longest existing.

The airport is a major hub for both American Airlines and United Airlines.

What is the airport code for Chicago O'hare International Airport?

The airport code for Chicago O'Hare International Airport is ORD.

Chicago O'Hare International Airport is located Northwest of Chicago, Illinois. It can take anywhere from a 30-minute drive to over an hour to reach the airport from downtown Chicago. 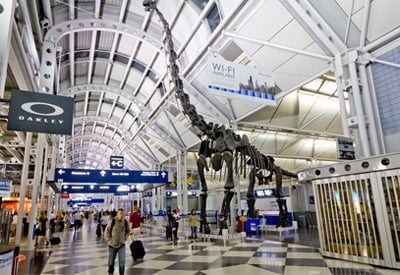 Did you know that you can buy lounge passes for Chicago O'Hare International Airport with Alternative Airlines? You can purchase them for Air France - KLM Lounge. 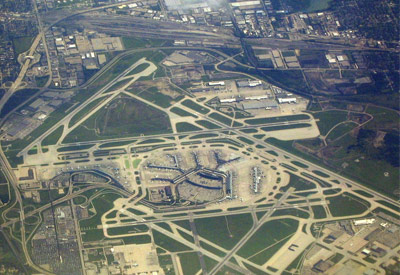 Chicago O'Hare International has four terminals in total. The terminals are numbered Terminal 1, Terminal 2, Terminal 3 and Terminal 5. Terminal 4 was a temporary terminal that is now shut.

Terminal 2 was built in 1962 and is exclusively a domestic terminal. The terminal is attached to Conrouse E and Concourse F. The terminal has three lounges — Delta Sky Club, United Club and Admirals Club.

Along with Terminal 2, Terminal 3 was created in 1962 and is also exclusively a domestic terminal. The terminal is attached to Councouses G, H, K and L. Although domestic, many international airlines

The terminal is also home to most of the airline lounges within the airport, including lounges from KLM, British Airways, SWISS and Air France.

How to get to Los Angeles International Airport

Taxis can be flagged down on the street but make sure they're licensed. The safest and most convenient way to order a taxi is to get whoever is providing your accommodation to arrange one for you. If you're travelling from the suburbs, it's best to contact a local taxi company.

There are two main train companies that travel to Chicago O'Hare International.

The first and cheapest way is the Blue Line Train, also known as the Blue Line 'L' (people in Chicago nickname this train the 'L'). This is a rapid-transit system that runs 24 hours a day from Chicago O'Hare to Forest Park Terminal, stopping in Downtown Chicago. The Blue Line Train will drop you off at the lower level of the parking garage.

Tickets can be bought via machines outside of stations and can be paid for using either cash or card.

The second train is Metra. The North Central Service train line is the Metra line that travels to Chicago O'Hare. To get to Chicago O'Hare, you must get off at the O'Hare Transfer Station stop, where you can then get a Shuttle Bus to the airport terminal.

Pace Route 330 travels on every day except Sunday and travels to the airport from Archer Ave/Harlem Ave in Summit.