China United Airlines is positioned as a mass-market economy airline, and is a low-cost carrier with headquarters in the Fengtai District of Beijing.

China United Airlines was originally founded in 1986 as part of the Chinese military but ceased flying between 2003-2005. It began operations again in 2005 with Shanghai Airlines as it's primary stakeholder. Although the airline is no longer related to the Chinese military, it still is able to use a number of military airports.  China United Airlines became a low-cost airline in 2014 in order to keep up with the latest trends in the aviation industry.

A passenger's baggage allowance will vary according to the ticket fare and destinations. But in general, economy passengers will need to pre-purchase checked baggage - or purchase allowance (additional fees) at the airport. Checked baggage will have to fit within maximum dimensions of no more than 40cm x 60cm x 100cm.

Online check-in is only available for flights departing from Beijing Airport. This can be completed through the China United Airlines webpage. Note that sometimes the airline will close its online check-in function - when this happens, check-in will need to be undertaken at the airport.

For all other routes, online check-in is not currently available, and will need to be completed at the airport.

Check-In at the Airport

Passengers flying with China United Airlines are recommended to arrive at the airport at least two hours prior to flight departure to make sure they have plenty of time to check-in for their flight. Check-in closes 40 minutes before departure.

The airline is a LCC, meaning services such as checked baggage and in-flight meals will have fees.

There is an in-flight magazine for entertainment, with on-board duty-free shopping available. On-board WiFi is not available.

Seats are basic but comfortable, with padded headrests and armrests and drop-down trays. Seats are configured in a 3-3 formation.

Online seat selection is available for some flights on certain routes from Beijing Airport. This will be confirmed during the booking process.

China United airlines is the only airline to use Beijing Nanyuan Airport as its hub. The airport is a military airbase that is also used as a secondary airport for the city of Beijing. It is located in the Fengtai District of Beijing. The airport will soon be replaced by the new Beijing Daxing International Airport. Airlines that will operate out of Beijing Daxing include Xiongan Airlines and Beijing Capital Airlines. 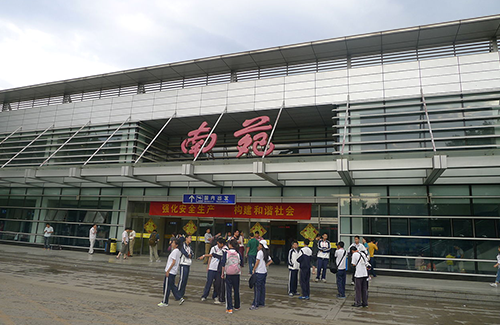 China United Airlines is not part of an airline alliance.

China United Airlines does not offer a frequent flyer program.