Croatia Airlines Ltd. is the national carrier of Croatia. The airline is headquartered at Zagreb International Airport in Buzin near Zagreb and operates domestic and international services mainly to European destinations. This includes cities such as Dubrovnik, Split, and Zadar.

Passengers with Croatia Airlines are entitled to participate in the Miles & More frequent flyer program.

Miles & More is the largest traveller loyalty program and offers rewards to passengers of the Star Alliance travelling on certain types of tickets.

There are three types of miles within the program:

The program was launched by Lufthansa and is used by 13 European airlines.

Economy Class: Passengers flying with Croatia Airlines in Economy Class are entitled to one cabin bag and one smaller handbag (this can be a handbag, laptop bag or briefcase). The maximum weight for this is 8kg.

Business Class: When travelling in Business Class, passengers are allowed 2 pieces of hand baggage weighing a maximum of 8kg.

Depending on the aircraft, Business Class passengers may also be limited to 1 item of hand luggage.

Economy Class is Croatia Airlines most basic cabin class. There are many different fares that passengers can purchase in Economy Class, with the more expensive options offering added extras such as free flight changes and cancellations.

Economy Class passengers can order from the airline's inflight menu, which features a selection of hot meals, snacks and drinks.

On select flights, passengers can watch films on the aircraft's shared monitor.

Economy Class seats are a standard size with comfortable cushioning and ample legroom. The seats are set out in a 3 x 3 formation.

Croatia Airlines doesn't have a Premium Economy. However, their Business Class is similar to other airline's Premium Economy in terms of facilities and price.

Croatia Airlines Business Class offers the next level of service on flights, for just a little extra cost.

Business Class passengers are given an inflight pre-departure drink before takeoff, as well as an inflight meal which is included in the price of the ticket.

Passengers are also given a larger baggage allowance, with extra checked and carry-on baggage.

Business Class seats are similar to those in Economy Class. Seats are set out in a 3 x 3 x 3 formation, however, each middle seat is left empty to give passengers extra room and comfort.

Passengers onboard Croatia Airlines are all entitled to free food and beverages. The type of food and drink will vary depending on your Class fare and the length of your journey.

In Economy, Croatia Airlines offer a traditional Zagreb snack and water is available. For any international flight that's longer than an hour, pumpkin seed crackers are also an option. There are also additional offers that provide passengers with a selection of products from the airline's partner, Uje.

Business Class passengers will receive a larger Zagreb snack that consists of items such as walnut rolls called orahnjača, pumpkin seed crackers, Samobor salami with pumpkin seed, horseradish sauce with apple and cinnamon biscuits. For flights that are shorter than an hour, a smaller snack is given. 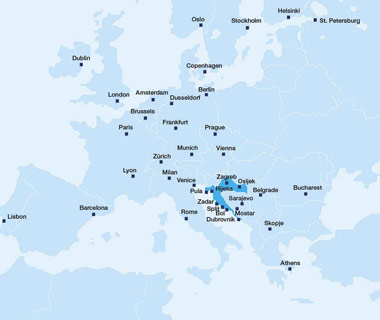 Zagreb International Airport, also known as Pleso Airport after the nearby suburb of Pleso, is the main international airport of Croatia and also a base of the Croatian Air Force and Air Defence.

Located 10 km from Zagreb Central Station in Zagreb, it served 2,430,971 passengers in 2014 and is the hub for the Croatian flag carrier Croatia Airlines.

Airlines that fly from and to Zagreb International Airport include British Airways, KLM, LOT and AirFrance.