Search and Book Flights to the Daytona 2023

Search and Buy Flights to Daytona 500

Daytona 500 is a 500-mile-long (805 km) motor race that takes place annually as part of the NASCAR Cup Series at Daytona International Speedway in Daytona Beach, Florida. It is the first of two cup races held every February at Daytona. Since 1959, the Daytona 500 has been regarded as the most important, prestigious race in the NASCAR series. The Daytona 500 is also known as "The Great American Race" and is often associated with the Presidents Day weekend.

The 65th Annual Daytona 500 is scheduled to take place on 19 febrero 2023 but is subject to change. Tickets are currently on sale at the time of writing. Read our guide on booking cheap flights in February to get the best deal possible when going to Daytona 500.

Daytona 500 will take place at the Daytona International Speedway in Daytona Beach, Florida. 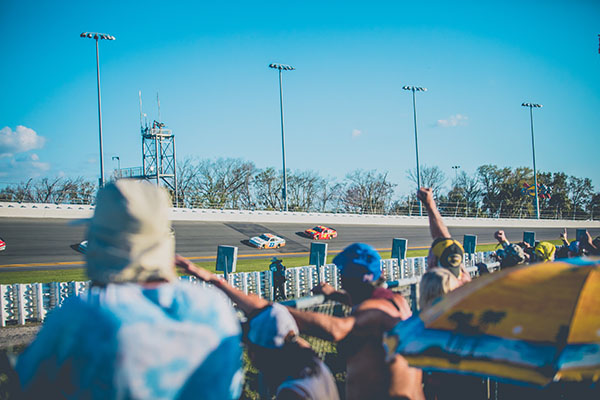 If you're flying to Daytona 500 from within the US, there are a select few airlines that fly to and from Daytona Beach International Airport - this includes American Airlines, American Eagle and Delta Air Lines. Once you land at Daytona Beach International, it's incredibly easy to get to Daytona International Speedway - you can hire a vehicle and access parking inside the venue just 4 minutes away from the airport, or you can take a taxi. There is also a broad range of hotels available close to the airport and venue.

Flying Internationally into the US

If you're flying internationally into the US for Daytona 500, you'll want to fly into Orlando International Airport. Airlines that frequently fly into Orlando include Aer Lingus, Air Canada, American Airlines, British Airways, Azul Brazilian Airlines, Emirates, Lufthansa and more. Getting to Daytona International Speedway from the airport will take roughly 1 hour by car or taxi. There is also a Daytona Orlando shuttle service that travels back and forth between the airport and Daytona with prices starting from $36 USD per adult for a one-way trip.

Daytona Beach International Airport (DAB) is a county-owned airport located right next to Daytona International Speedway, 3 miles away from Daytona Beach, Florida. It's the closest airport to the Daytona 500 venue and is only a 4-minute drive away by car or taxi. This airport is perfect for those travelling domestically within the US to get to the event, mainly from Charlotte, Dallas-Forth Worth, Philadelphia, Washington and Atlanta. The airport is also in close proximity to hotels and other accommodations in Daytona.

The Daytona 500 is scheduled to take place on 19 febrero 2023 but may be subject to change.

Where can I book flights to Daytona 500?

You can book flights to Daytona 500 through Alternative Airlines. Using our search form at the top of the page, you can enter your departure details as well as arrival destinations (we recommend Daytona Beach or Orlando), the dates you plan to travel, how many passengers will be flying and the cabin class you'd like to fly in.

Can I buy flights on finance?

Absolutely! With Alternative Airlines, you can book your flights to Daytona 500 today and pay later in instalments. We have 40+ different payment methods to offer including 'buy now, pay later' payment plans such as Afterpay, Klarna, PayPal Credit and more. Read our guide on all our finance options to find out more.