There are currently only three cities in India that you can fly from directly to the USA:

Bangalore ✈ to Seattle or San Francisco

Hyderabad ✈ to Chicago (from noviembre 2022)

Only a handful of airports within India offer direct flights to the US - these airports are located in New Delhi, Mumbai and Bangalore.

India Gandhi International Airport is the main international airport serving New Delhi, India. It's currently a hub for Air India, Alliance Air, IndiGo and SpiceJet, among others. To fly direct to the US from New Delhi, you can fly out of this airport with three airlines - Air India, United Airlines or American Airlines. The available US cities that you can fly to from this airport include New York (15hrs), Chicago (15hrs) and San Francisco (16hrs).

If you're flying from Mumbai, you can fly direct to the US from Chhatrapati Shivaji Maharaj International Airport (otherwise known as Mumbai International Airport). This airport serves mainly Mumbai and its surrounding regions. It's a hub for many Indian airlines like Air India, Vistara, Go First and IndiGo. The only airline that flies direct to the US from this airport is United Airlines, with its only US destination being Newark (New York). The flight duration from Mumbai to Newark is around 15 hours.

Kempegowda International Airport in Bangalore is another airport where you can fly direct to the US from. This airport serves the southern region of India and is a hub for AirAsia India, Alliance Air, IndiGo and many more airlines. At the moment, United Airlines is the only airline flying direct to the US from this airport. San Francisco is the only city within the US that you can fly direct to from India (15hrs) all year round. From March to September, American Airlines operates direct flights from Bangalore to Seattle, usually lasting around 17 hours.

Rajiv Gandhi International Airport is an international airport serving Hyderabad. It's currently a hub for Alliance Air, Blue Dart Aviation, IndiGo and SpiceJet. As of noviembre 2022, Air India will be operating direct flights to Chicago from Hyderabad. This flight will last around 16 hours.

John F. Kennedy International Airport, also known as JFK Airport, is the primary international airport operating flights out of New York City in the US. It's one of the busiest airports in the world, with over 90 airlines flying in and out on a regular basis including American Airlines, Air India and United Airlines. If you're planning to fly direct to JFK Airport from India, you'll need to fly from New Delhi and fly with Air India or American Airlines.

Another airport in New York that you can fly to direct from India is Newark Liberty International Airport. It's the second busiest airport in the New York airport system - you can fly direct to this airport from New Delhi and Mumbai using either Air India or United Airlines.

San Francisco International Airport is an international airport in California. It's a major gateway between the US and India as you can fly direct to this airport from New Delhi, Mumbai and Bangalore. The airlines that fly direct between these cities and San Francisco are Air India and United Airlines. Flights on this route may not be available all year round - more information can be found below.

Chicago O'Hare International Airport, also known as O'Hare Airport, is the main international airport operating flights out of Chicago. Currently, you can fly direct from New Delhi to Chicago with Air India and United Airlines. A new route connecting India and the US will be starting in noviembre 2022 - direct flights will be available from Hyderabad to Chicago with Air India.

What Airlines Fly Direct Between India and USA?

The airlines that fly direct between India and the US are Air India, American Airlines and United Airlines. Below, you can see all of the direct routes from India to the US operated by each airline as well as the flight duration and when these flights are operating throughout the year.

To start searching, use our search form at the top of the page and search for flights with any of these airlines and routes!

You can also use our airline filters to only view flights with a specific airline, direct flights and different flight times.

How to Find Direct Flights India to USA

1. Firstly, fill out our search form at the top of the page. You can use the routes listed in the table above to easily find direct flights between India and the US. Enter the dates you wish to fly, the number of passengers flying and the cabin class you'd prefer to fly in. Hit the 'Search Flights' button when you're ready! 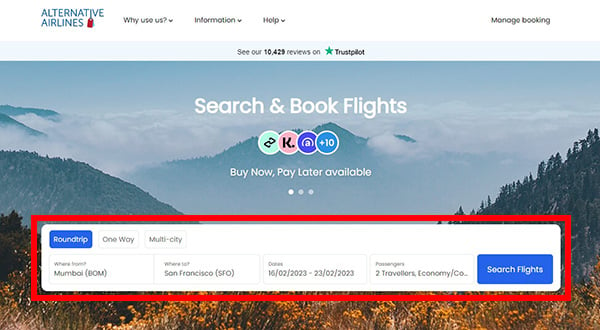 2. To filter the search to only show direct routes between India and the US, you can select the 'Direct' checkbox under the 'Stop' tab to the left of the results. Once you've found the ideal flight for you, confirm your selection to proceed with the booking. 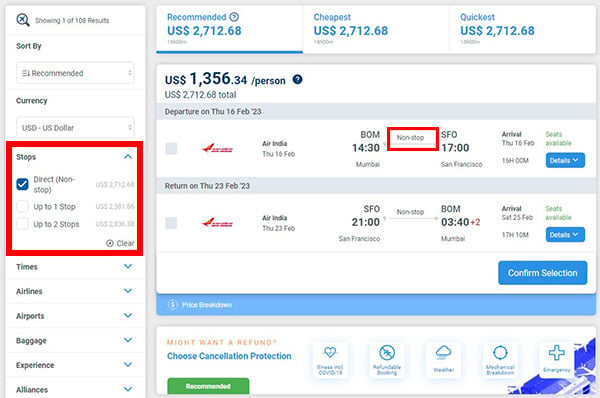 3. After you've confirmed your selection, you can fill in your passenger details and secure your booking with any of the flexible payment methods we offer at checkout, including debit, credit, Buy Now Pay Later plans and even cryptocurrency! Enjoy your flight! 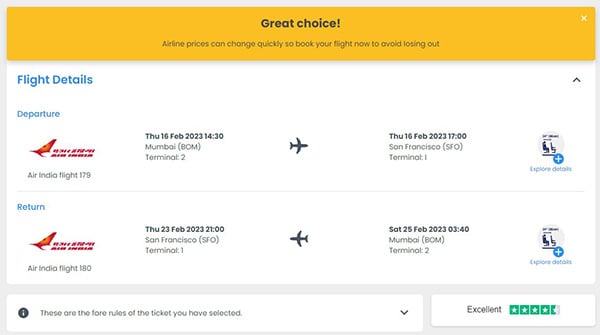 Can I fly direct from India to the USA?

Yes! There are so many options for flying direct from India to the USA. Airlines that operate direct routes between India and the United States include Air India, American Airlines and United Airlines. Use our search form at the top of the page to search for the direct flights that are most suitable for you. Some cities you can fly from are New Delhi, Mumbai, Bangalore and Hyderabad. The US cities you can fly direct to include San Francisco, New York, Chicago and Washington, among others.

What is the flight duration between India and the USA?

Can I finance my direct flights between India and the US?

Absolutely! When you search for your direct flights from India to the US with Alternative Airlines, you'll have the option to book those very flights with flexible payment plans that allow you to spread the cost of your tickets over time. Flights from India to the US can be expensive, but you can make the cost of your tickets more manageable and affordable by paying later with payment plans like Afterpay, Klarna and Affirm, among others. Take a look at our finance options page for more information.