Secure your domestic flight within Austria with over 40 different payment methods including Buy Now Pay Later, Cryptocurrency, Credit and Debit cards and more.

What are Domestic Flights Within Austria? 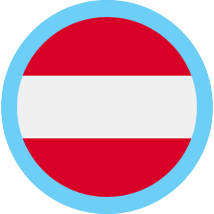 Most domestic flights within Austria are carried out by Austrian airlines such as People's and Austrian Airlines. However, there are many other airlines that fly domestically within Austria including EasyJet and Eurowings.

To find out more about each individual Austrian airline, click on the airline name to visit each airline page.

Online: Online check-in is open from 47 hours before your flight departure time.

Airport: All airports have different check-in times. Please check your itinerary to find out what time check-in opens for your flight. We advise that you arrive at least 2 hours before your flight departure time.

People's formerly known as People's Viennaline, is an Austrian airline headquartered in Vienna. The airline operates scheduled and charter passenger flights from its base at St. Gallen-Altenrhein Airport and Vienna International Airport. People's also operates seasonal flights to destinations elsewhere in Europe.

Online: Online check-in is open from 23 hours up until one hour before the scheduled flight departure time.

Airport: Airport check-in must be completed at least 60 minutes before the scheduled flight departure time.

Online: Online check-in can be down 30 days before flying up until 2 hours before your flight departure time.

Listed below are all of the airports that have scheduled service on commercial airlines.

Why Book Domestic Flights in
Austria?

Austria is a landlocked country in the southern side of Central Europe that lays in the Eastern Alps. It's made up of nine states: Burgenland, Kärnten, Niederösterreich, Oberösterrich, Salzburg, Steiermark, Tirol, Voalberg and Wien.

Austria is filled with culture! Austria has it all from art to music, to museums and more. Austria is known for the snowy Alps, but there is so much more to Austria than the ski slopes. The country has some breathtaking landscapes, that you'll want to capture with your camera.

Christmas in Austria is a super exciting time of the year. Austria takes its Christmas markets very seriously - it's the perfect winter wonderland.

Do I need a passport for domestic flights in Austria?

If you're flying domestically within Austria, all you need is a Valid ID Card with photo identification. You'll only need a passport if you're travelling from overseas to Austria.

How early do I need to arrive for domestic flights in Austria?

In order to allow enough time to check-in, drop any checked bags and pass through security, we recommend that you arrive at 2 hours prior to your flight departure time. Please note that check-in deadlines change from airline to airline. However, in general most airports check-ins close 30–45 minutes before scheduled flight departure time on domestic flights within Austria.

Can I buy domestic flights in Austria online?

Can I book domestic flights in Austria and pay later?

Absolutely! When you book a flight with Alternative Airlines you can buy ANY domestic flight within Austria and spread the cost over a period of time. We have partnered with a number of payment plan providers that let you split the cost of your flight over weekly, bi-weekly or monthly instalments. This includes Klarna, Afterpay, Clearpay, Zip and many more. The financing option available at checkout will depend on the country you reside in and the currency you pay in.