Are you looking for domestic flights in Bhutan? At Alternative Airlines, we're here to help. You can easily search, compare and book flights with any of the 600+ airlines available on our site. We also have 40+ ways for you to pay for your flights, including Buy Now Pay Later methods, cryptocurrencies and virtual wallets!

When you search for domestic flights in Bhutan through Alternative Airlines, we'll show you all of the available airlines that you can book with as well as the airports you can fly to. 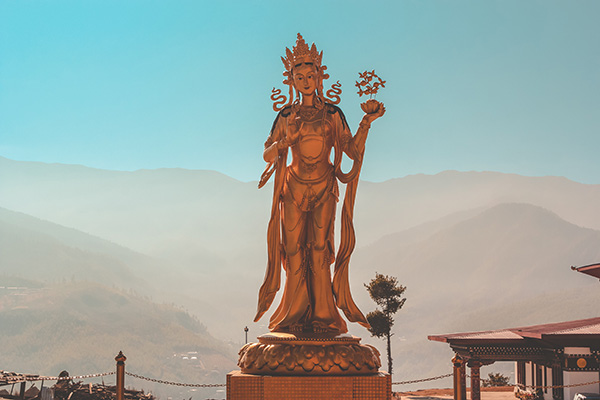 Use our search form at the top of the page to begin searching for your domestic flights within Bhutan!

What are Domestic Flights in Bhutan?

There are two airlines based in Bhutan - Bhutan Airlines and Drukair - however, domestic flights in Bhutan are mainly carried out by Drukair. To enter Bhutan, you can fly to Paro International Airport from a handful of cities in Asia. From this airport, you can then reach domestic destinations in Bhutan such as Trashigang, Jakar and Gelephu.

Below, you can see more information about which airlines operate domestic flights within Bhutan. 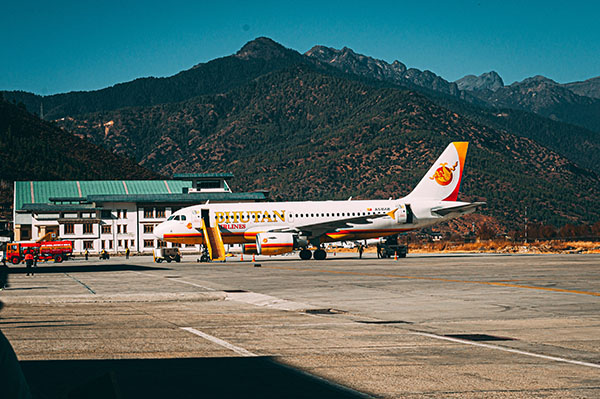 Drukair is the flag carrier airline of Bhutan and is headquartered in Paro. Drukair currently flies to over 10 destinations across Asia, including domestic destinations inside Bhutan. This is the best airline to use if you want to book domestic flights in Bhutan as it flies to all four airports in the country - Paro, Trashigang, Jakar and Gelephu.

Online check-in is available. Web check-in and mobile check-in are available between 72 hours to 4 hours before the scheduled flight departure time.

Airport check-in is available at the Drukair counters and will be open from 3 hours to 1 hour before the flight is scheduled to depart.

Bhutan Airlines is a private airline based in Bhutan and is headquartered in Thimphu. This airline doesn't currently offer domestic flights inside Bhutan but is a great airline to use if you're planning to enter Bhutan before boarding a domestic flight with Drukair.

Bhutan Airlines used to offer domestic routes in Bhutan, flying to Jakar and Trashigang, but suspended these routes due to financial losses. The airline still flies to Paro International Airport from a handful of cities across Asia, including Bangkok, Delhi and Kolkata.

There are currently only 4 airports in the country of Bhutan - these are based in Paro, Jakar, Trashigang and Gelephu.

You may need to book a connecting flight to reach Bhutan if you reside in Europe, Africa, Oceania or the Americas as direct flights to Paro are only available from certain cities in India, Bangladesh, Thailand, Nepal and Singapore.

Bathpalathang Airport is a domestic airport in Jakar, Bhutan. At the moment, the only airline that flies to this airport is Drukair, with routes to Gelephu, Paro and Trashigang.

Yongphulla Airport is a domestic airport situated in Trashigang, Bhutan. Drukair flies to this airport from Jakar and Paro.

Gelephu Airport is a domestic airport located in Gelephu, Bhutan. The only airline that flies to this airport is Drukair, from Jakar and Paro. The airport has been in and out of use over the last decade.

It had a brief period of flights in 2015 however these were found to be unprofitable. Flights eventually recommenced in 2017 thanks to financial support from the Royal Bhutanese Government, although, the future of this airport is uncertain.

Why Book Domestic Flights in Bhutan?

Bhutan is a hidden gem that is tucked away in South Asia. Although it's a small country surrounded by the bigger gameplayers of tourism in Asia, it still has an abundance of culture, history and natural landscapes waiting to be explored!

Bhutan is a Buddhist kingdom situated on the edges of the Himalayas and is home to many monasteries, fortresses and beautiful natural landscapes, ranging from subtropical plains to steep mountains and valleys. Bhutan didn't use to allow travellers to explore its sacred lands prior to 1974 in an attempt to preserve its untouched landscapes and landmarks - this makes Bhutan even more special to visit!

There are many activities to do when you visit Bhutan. You can hike up to the Tiger's Nest, also known as Paro Taktsang, which is a monastery situated high up on the cliffs of Paro Valley. This landmark is surrounded by lush rice paddies and the legend says that a Guru used to meditate inside a cave in the monastery for many years until he flew out of the cave on the back of a tigress to fight off evil spirits.

Hot stone baths are popular in Bhutan and are the ideal spa therapy for any backpacker looking to take a break from their adventure in Bhutan.

The best time to fly to and within Bhutan is from October to December. This is because the air is clear, crisp and fresh with sunny skies. Temperatures are cooler but it's also the shoulder season which means there will be fewer crowds. If you'd like to explore Bhutan in warmer temperatures, you can also visit from June to August. 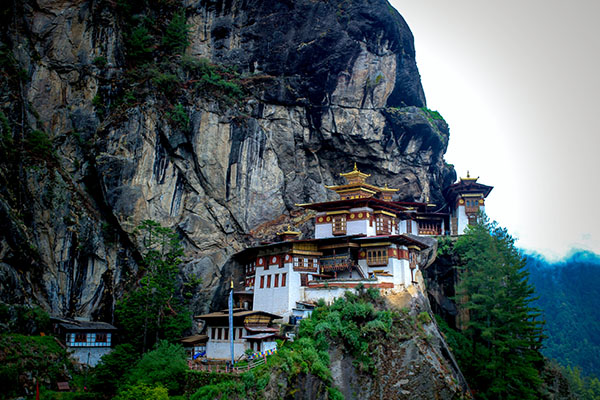 Do I need a passport for domestic flights in Bhutan?

A copy of your passport will be required for domestic flights in Bhutan. There are specific requirements for international travellers entering Bhutan. All foreign travellers flying into Bhutan must have a valid visa clearance letter issued by the Department of Immigration of Bhutan before boarding the flight. More information can be found on Bhutan Airlines' website and Drukair's website.

Do I need a visa for domestic flights in Bhutan?

All foreign travellers who wish to explore Bhutan will need to have a valid visa clearance letter that has been issued by the Department of Immigration of Bhutan before entering the country. Visas are only issued to tourists who have booked with a locally licensed tour operator or through a foreign travel agent. You will receive your visa upon arrival in Bhutan.

For more detailed information on entry into Bhutan and visa requirements for domestic travel in Bhutan, we recommend contacting your Department of Travel for the country you reside in.

How early do I need to check in and arrive for a domestic flight in Bhutan?

If you're checking in at an airport in Bhutan and flying with Drukair, the check-in counters usually open from 3 hours up to 1 hour before the flight is scheduled to depart. Online check-in is also available. You can check in online via the Drukair mobile application or via Drukair's website - this is available from 72 hours up to 4 hours before the flight is scheduled to depart.

As a general rule, we recommend arriving at the airport at least 2 hours prior to the departure time to allow you plenty of time to check in your baggage and get through security.

Can I book domestic flights in Bhutan online?

Yes! You can book your domestic flights in Bhutan right here at Alternative Airlines! Although we offer 600+ airlines on our site, the only airline you'll be able to book with is Drukair, Bhutan's flag carrier airline.

Use our search form at the top of the page to begin searching for your domestic flights in Bhutan. Enter 'Bhutan' into the departure or arrival airport field - you should see a list of all the available cities in Bhutan that you can fly to.

Can I book domestic flights in Bhutan and pay later?

Absolutely! At Alternative Airlines, we have many different ways for you to pay for your tickets, including Buy Now Pay Later methods that let you spread the cost of your tickets over time, such as Afterpay, Klarna and Affirm. This means you can book your domestic flights in Bhutan today and pay later on a weekly, bi-weekly or monthly basis, depending on the plan you chose.

Please note that different payment plans will appear at checkout depending on your country of residence and the currency you use. You can find out more about all our Buy Now Pay Later options here.