About Domestic Flights in china 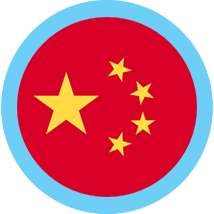 Air China is the national carrier of China and one of the most well-connected airlines' in China overall.

It's main focus cities are Chongqing, Hangzhou, Hohhot, Shenzhen, Tianjin and Wuhan. Along with its two hubs, these are the cities that it has most connections to.

Along with Air China and China Southern, China Eastern is one of the 'big three' airlines of China, which is partly owned by the Chinese government. The airline has airport hubs at Shanghai-Pudong, Shanghai-Hongqiao, Kunming and Xi'an. Although China Eastern flies to many destinations across China, as its name states, the airline has a stronger focus on the eastern regions in China.

China Southern Airlines is another state-owned airline and one of the 'big three' airlines of China. Much like China Eastern, the airline has a stronger focus on the 'southern' part of its name, with its base at Guangzhou Baiyun International Airport. However, the airline also has a hub at Beijing-Capital International Airport and offers internal flights across the whole of China.

The airline flies domestically to 27 of the provinces/regions within China and competes on some of the major of the domestic destinations that the 'big three' flies to. Its focus cities include Changsha, Chongqing, Guangzhou, Lanzhou, Sanya, Shenzhen, Taiyuan and Ürümqi.

The airline has a number of part-owned and fully-owned subsidiaries, including Air Chang'an, Beijing Capital, Fuzhou Airlines, Grand China Air, Lucky Air, Tianjin Airlines and Urumqi Airlines. Along with its subsidiaries, Hainan Airlines covers all major locations in China.

The airline is partly-owned by Air China and has a strategic partnership with the airline as to avoid conflicting routes. For example, from its two hub airports, Shandong Airlines doesn't operate to any destinations in west China, which is an area that Air China has covered.

The airline flies to 27 of the provinces/regions in China overall.

Shanghai Airlines is a fully-owned subsidiary of China Eastern Airlines. The airline was acquired by China Eastern in 2011, with the merger designed to combine the two Shanghai-based airlines routes and give greater competition to other big Chinese airlines in the domestic market.

Shenzhen Airlines is a Chinese airline that is based at Shenzhen International Airport. The airline operates to over 50 domestic destinations from its hub, with more than 130 airport pairings across the whole of China.

The airline is one of the better domestically connected airlines in China, with flights to 29 of the provinces/regions in China.

Sichuan Airlines is a Chinese airline that's hub airport is located at Chengdu. The airline is the main airline in western China and is a good choice if looking for a well-known airline that travels to or around western China, as it flies to at least one destination in each of the Xinjiang, Tibet, Gansu and Qinghai provinces.

However, the majority of its routes fly outside of western China, with over 60 domestic connections from its hub airport in the Sichuan province.

XiamenAir is a Chinese airline with both a domestic and international route network. The airline is based out of Xiamen Gaoqi International Airport, from where it flies to over 50 domestic destinations.

The airline is partially owned by China Southern Airlines and holds a stake in Hebei Airlines and Jiangxi Airlines, where it works with all three airlines as to avoid conflicts in their schedules.

Overall, XiamenAir flies to over 29 of the provinces/regions in China.

All airlines that fly domestically in
china

Below is a table of all Chinese airlines that are available at Alternative Airlines and which province they're based in.

Online check-in generally opens either 48 or 24 hours before scheduled flight departure time and closes one-hour before on domestic flights.

Online check-in is open from 42 hours up until one-hour before flight departure time.

Hainan Airlines ask that you arrive at the airport at least 60 minutes before scheduled flight departure time for domestic flights.

Generally, Shangdong Airlines ask that you check-in for your domestic flight at least one hour before scheduled flight departure time.

Its recommended to arrive at least one hour before flight departure time for check-in on domestic flights.

Why Book Domestic Flights in
China?

China is such a large country with so much to explore that air travel is essential. China is fairly well-connected by its train system, however, if you're travelling from one province to another, riding the train can take anywhere from hours up until days. For example, travelling from Kunming in southwest China to Harbin in northeast China can take up to 3 days on the train. Whereas a direct flight with Air China takes just five hours.

Catching a domestic flight is a much easier and more efficient way to travel across China. China is one of the countries with the highest number of airlines' in the world and most of them (over 50) are available at Alternative Airlines. This means that no matter what two destinations you want to travel between, there'll always be a flight option available.

Because there are so many different airlines in China, there's also a great deal of choice for the type of airline that you fly on. Whether you want to save money and fly low-cost, have a little extra comfort on a legacy carrier or enjoy something in-between on a hybrid airline, you'll be able to find an airline that suits whatever you need.

Flag icons made by Freepik from www.flaticon.com is licensed by CC 3.0 BY