Read on for all the information you need about flying internally within India, including how to get tickets, and even some commonly asked questions.

WHICH AIRLINES FLY WITHIN INDIA?

Domestic flights in India are provided not only by a local airline, but also by other airlines which have multiple destinations within India. These airlines can be anything from full-service airlines to low-cost carriers. Airlines include:

The flag carrier of India, operating international flights as well as domestic flights. It also has a subsidiary airline called Air India Express and Alliance Air. The airline has a hub at Indira Gandhi International Airport, Delhi, flying to destinations like Bangalore, Chennai, Kochi, Thiruvananthapuram and many more.

Vistara is a full-service airline based in Gurgaon, India operating over 300 weekly flights to over 20 domestic destinations including New Delhi, Ahmedabad, Mumbai, Chennai, Kochi and many more. The airline is owned by Tata Sons and Singapore Airlines.

A low-cost airline based in Gurgaon, India, previously named Royal Airways. the airline is now flying to over 50 domestic destinations including Chennai, Bagdogra, Gaya, Tirupati, Ahmedabad, Indore and many more. A fleet of Boeing 737 and Bombardier Q400 aircraft are being deployed for the airline from its hub at Indira Gandhi International Airport.

An Indian low-cost carrier based at Mumbai and has five hubs across India including Mumbai, New Delhi, Bangalore, Kannur and Kolkota. The airline also flies to over 20 cities in India including Guwahati, Chandigarh, Goa, Ahmedabad, Jammu, Leh, Srinagar, Ranchi and more.

Jet Airways was the second largest airline in India, operated over 300 daily flights to over 70 destinations globally. It used to have a hub at Chhatrapati Shivaji International Airport. The airline suspended operations in 2019, but it's planning for a return in 2021.

Star Air is an Indian airline based in Kempegowda Interational Airport and only operates domestic flights and some commuter flights for the region. The domestic destinations that the airline is flying to are Bangalore, Ahmedabad, Belgaum, Tirupati, Kalaburagi, Hubli, Indore, Mumbai, Ajmer and Ghaziabad.

What are domestic flights?

A domestic flight in India is one which takes off from one location in India, and lands in another location but still in India, meaning they stay within the same country. An example is Delhi (DEL) to Mumbai (BOM), which has a duration of around 2 hours for a direct flight.

Use our search bar at the top of the page to enter your start and end locations to see what cheap flights Alternative Airlines offer. Alternatively, you may be interested in our multi-city stop flights, if you are planning on visiting multiple destinations within India.

Why book internal flights within India?

Whether you are travelling within India for work and require a commuter flight, travelling for a holiday with family or wanting to explore the whole of India with a multi-city or open-jaw flight, Alternative Airlines can find flights to suit you.

As one of the largest countries in the world, and the second-most populated country in the world, there’s no wonder that there’s so much to see and do in India. From luxurious beaches in Goa, culture at Rajasthan and Jaipur, to the more obvious tourist spots such as the Taj Mahal and the Golden Temple at Amritsar. 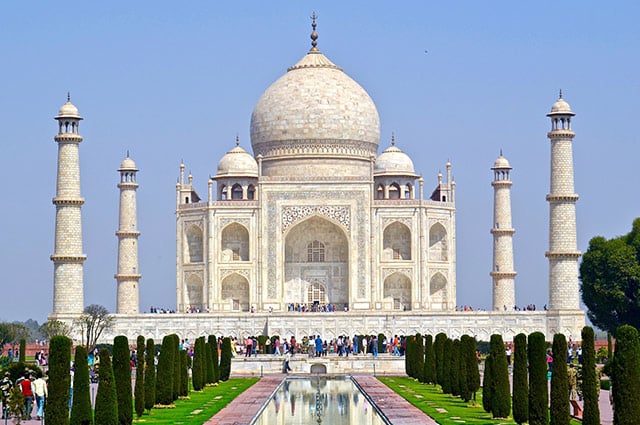 You can get to sites such as these and other destinations from major cities such as Mumbai, Bangalore, Delhi and Goa.

The following is a list of the most popular India internal flights:

Although the check-in time will often be later for domestic flights than it is for international flights, the times will vary from airline to airline. Here are a few popular airlines along with their check-in times for web check-in and airport check-in:

- Online: 48 - 2 hours before for most flights. For some flights, this will be available 54 hours before your flight.

- Airport: At the airport, passengers will have to have checked in for their flight at least 75 minutes before departure.

- Online: Passengers can check-in online anytime, up to 1 hour before flying.

- Airport: Check-in at the airport will close 45 minutes prior to departure time, although passengers are recommended to check in around 2 hours before flying.

- Airport: 2 to 1 hour before flight departure, except passengers travelling from Jammu, Leh or Srinagar airport where airport check-in will end 2 hours before.

As JetLite is a subsidiary of Jet Airways, their check-in restrictions are the same. Please read the information above to discover the check-in information for JetLite flights.

When going to Goa, you will need to fly to Goa International Airport, which is officially known as Dabolim Airport. This airport is located about an hour away from the city of Goa, but there are great connections to the city from the airport.

There are a number of airlines which fly to Goa Airport from destinations across India. These include Air India, Alliance Air, IndiGo, SpiceJet and Vistara.

Most of the major Indian carriers operate flights from Mumbai to other destinations in India. These include GoAir, AirAsia India, Alliance Air, Air India, SpiceJet and Vistara.

Rajiv Gandhi International Airport, sometimes referred to as Hyderabad Airport, is the closest airport to the city of Hyderabad. Located just 24km outside of Hyderabad, there are good connections into the city from the airport.

IndiGo, SpiceJet, TruJet, Vistara, GoAir and Alliance Air all operate flights from other destinations in India to Hyderabad. There are in addition a number of other airlines which connect Hyderabad to the world through flights to destinations elsewhere in the world.

To get to Chennai, you will need to fly into Chennai International Airport.

To get to Chennai from a destination within India, you can fly on airlines such as Vistara, US Bangla Airlines, TruJet, SpiceJet, IndiGo, and Alliance Air.

Do I need a passport for domestic flights in India?

Currently, a passport is not required for Indian nationals when travelling on within flights within India. However, passengers are required to have a valid form of identity. This could include the following:

For children or students at school, a college or school identity card is also considered acceptable proof of identification. Infants travelling with their parents should not require identification, assuming that their parents have valid identification. However, it is recommended that children under 2 who travel for free without a seat on the plane take their birth certificate with them, to prove their age.

Passengers who are not Indian nationals, but are foreign nationals will need a passport on their Indian internal flights. Read more about travel documents for flights here.

How early do I need to arrive for flights within India?

Generally, passengers won’t need to arrive as early for their flights as they could if they were flying internationally. Please see the check-in times above for popular Indian airlines to see the latest check-in time, and plan your arrival at the airport around that.

When is the best time to find cheap tickets?

There are many tips and tricks you can follow to help get cheap flights in India. For example, our blog on the cheapest day to buy flights is good for finding general tips about booking cheap flights. However, for domestic flights in India specific information, you should do your research and look up peak times for visiting India, and things such as big events in the areas you are planning to travel to which might bump the price up.

How much baggage can I take on domestic flights within India?

Baggage will depend on the airline you are flying with. When searching and selecting a flight on Alternative Airlines, the included baggage will be displayed, with additional baggage available for purchase displayed as an option.

Can I book domestic flights online?

Yes! You can book any flights in India online at Alternative Airlines. Simply use the search bar above to enter your flight search, select your desired flights and simply continue on with the payment process. The flight booking process is simple, we also have a step-by-step guide to help you.

Are fruits allowed on domestic flights?

You will have to get the permission of the airline you are flying with to see if you are allowed to take fruits with you on your flight. Read more about the foods you can fly with here, or alternatively, you can check out our information about booking an airline meal if you’d prefer a meal on your flight.

If you plan on flying internally within Pakistan, you may be interested in the following guides:

Flying while wearing a hijab or burka