Eagle Air Iceland provides tourism, transport and emergency response services to customers, alongside tours and charter services. The airline is based at Reykjavik and flies domestically within Iceland. The airline was originally launched in 1970 and ceased operations in 1995 before re-launching in 2003.

Jökulsárlón and other glaciers

Economy Class is Eagle Air's only cabin class, the service is the same no matter which route is flown on. However, the layout changes slightly depending on which aircraft operates the flight.

The airline flies along some of the most beautiful and scenic routes across Iceland. This means passengers can enjoy stunning views of the country throughout the journey.

There is no in-flight entertainment nor food or drink offered onboard this service.

Economy Class seats are set out in a 1 x 1 or 1 x 2 configuration. The cabin is designed to give each passenger and each seat a sufficient amount of legroom and space.

Each passenger flying with Eagle Air Iceland has a maximum luggage weight allowance of 20kg (44lbs). If the weight of the luggage exceeds 20kg (44lbs) then an excess baggage fee is added.

Eagle Air Iceland passengers can carry up to 6kg (13lbs) of hand luggage. Since there are no overhead compartments on board, it is recommended that passengers keep hand luggage to a minimum. 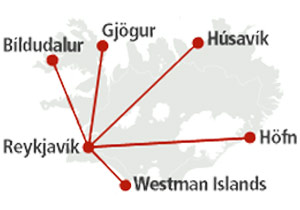 Eagle Air Iceland's fleet is made up of six different aircraft model from three different manufacturers.