Make a Reservation and Find Some Amazing Deals

Firefly is a Malaysian Airline that is based out of both Sultan Abdul Aziz Shah Airport and Penang International Airport. The airline operates both domestic scheduled service within Malaysia and international flights across Southeast Asia.

The airline is a full subsidiary of Malaysia's national carrier, Malaysia Airlines and was created with the goal to offer point-to-point flights throughout Southeast Asia. The airline has a twin hub strategy with flights flying from Subang Sultan Abdul Aziz Shah Airport and Penang. Despite being owned entirely by Malaysia Airlines, Firefly operates with a separate management team, crew and fleet.

Firefly launched flights in 2007, with its inaugural flight flown between its hub at Penang (HEN) and Kota Bharu (KBR).

Firefly flies to many destinations across Malaysia and the rest of Southeast Asia, including to Ipoh, Kota Bharu, Penang, Medan, Singapore, Krabi, Phuket and more. 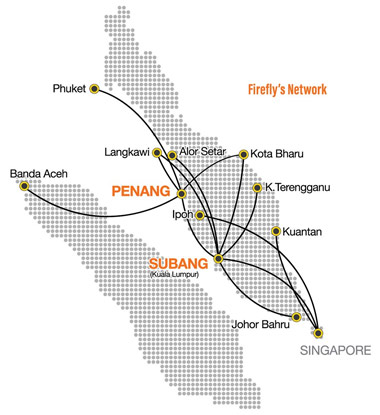 Bags which exceed this limit will be charged for excess baggage. Alternatively, passengers can purchase extra baggage online prior to flying in increments of 5 kg, 10k g and 15 kg.

Firefly’s only cabin class is Economy Class. All passengers will have a standard seat in the aircraft and have the option to purchased food and drink once in-flight. Within Economy Class, there are two separate fares to choose from.

Passengers that purchase the FlyBASIC fare are given standard baggage (20kg) and have pre-allocated seating, which means passengers are given a seat rather than choosing it themselves.

Passengers can choose to upgrade their fare to FlyPREMIER. On this ticket type, passengers will be able to bring with them more baggage (an extra 10 kg) and have a more flexible ticket wherein they have one free date or time change (up to twp hours before flying).

Not only do passengers in FlyPREMIER get an extra 10kg of checked luggage, but they also get priority baggage. Passengers that purchase the FlyPREMIER fare also have the option to get access to the SkyLounge at Subang Skypark Terminal (if flying from this airport).

Economy Class offers 30 inches of seat pitch. Passengers that check-in online or purchase the FlyPREMIER fare are able to select their seat free of charge and will have the option to select seats on the front row of the aircraft, which give more legroom.

There's no in-flight entertainment but each passenger is given an in-flight magazine which they can read.

The airline serves refreshments on board, typically snacks such as fruit and drinks such as soft drinks, juices and hot tea or coffee.

There's no WIFI on Firefly flights.

Passengers earn Enrich Miles for each flight flown, which they can then spend on either Firely or Malaysia Airlines flight. The amount of Enrich Miles earned per flight depends on the fare purchased and the route flown.

Take a look at the table below which shows the benefits for each membership.

Firefly currently offers online check-in for passengers travelling domestically within Malaysia, or between Malaysia and Singapore. This web check-in service will open at the earliest 14 days before departure, closing one hour before departure. Once passengers have checked in successfully, they must print their boarding pass to take with them.

Passengers who are not eligible for online check-in on Firefly must check-in at the airport check-in counters. Passengers must ensure that they have plenty of time, as passengers who arrive late to check-in will not be allowed on the flight.

Firefly isn't a part of any airline alliance. However, its parent airline, Malaysia Airlines is part of the Oneworld alliance.

Firefly also has a codeshare agreement with Firefly, which expands its reach beyond Southeast Asia and to other parts of the world.

Firefly's fleet consists entirely of ATR 72-500. The airline has more than 10 of these regional jets within its fleet, which it uses to operate all flights. The airline's ATR-72-500s are designed to carry a maximum of 72 passengers.

The airport is also a hub for AirAsia, Malaysia Airlines and Malindo Air.

Please click on the logos below to find out more about airlines that fly similar routes to Firefly:

After previously announcing temporarily flight cancellation through May and June due to COVID-19, Firefly has updated its route offering and is flying a limited scheduled between 29 abril—12 mayo. The airline is only offering domestic flights during this time. Previously, international flights had set to be cancelled until June. However, this may change depending on how the situation evolves.

At the moment, all passengers are asked to wear face masks for the entirety of their trip. This includes at the airport, on the plane (except when eating) and when they land at the arrival airport.