If you're searching for First Class flights to New York, you've come to the right place. At Alternative Airlines, we've got 600+ airlines for you to choose from when you book your flights through us, making booking First Class tickets to New York super easy! With over 40 different ways to pay for your tickets, including flexible Buy Now Pay Later methods, you can manage the cost of your first-class tickets and spread the payments over time, making First Class more affordable!

Use our search form at the top of the page to start searching for First Class flights to New York.

New York is one of the world's most visited cities as it's densely packed with iconic landmarks, a jungle of skyscrapers and a multitude of shopping districts. It's a great destination all year round as there are always things to do - you can visit the Empire State Building or the Statue of Liberty, and even take a long walk in Central Park. If you're aiming to visit New York for a special occasion or that trip you've been planning for ages, why not treat yourself and book First Class tickets to New York? Airlines that provide incredible first-class services to New York include American Airlines and Delta Air Lines, as well as other airlines that fly to New York internationally. 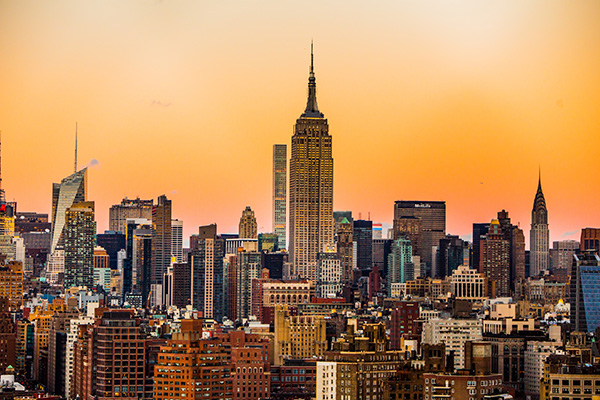 Below are some of the most popular First Class routes to New York:

American Airlines is a major airline based in the United States and headquartered in Fort Worth, Texas. It's the world's largest airline based on its fleet size and the number of scheduled passengers carried. The airline operates almost 7000 flights daily to over 350 destinations in more than 50 countries across the globe. American Airlines offers first-class services for domestic (First) and international (Flagship First) flights to New York with its Boeing 777-300ERs and Airbus A321s.

Flying to New York with a Flagship First ticket includes lie-flat seats, chef-inspired cuisine, free in-flight entertainment and access to WiFi. If you're flying from another city in the US to New York on a standard First Class ticket, you'll have comfy, wide seats with extra legroom, free in-flight entertainment and premium restaurant-level dining.

The amenity kit provided on a Flagship First flight to New York with American Airlines includes a Shinola and D.S. & Durga travel kit as well as a Casper sleep set which consists of pyjamas, slippers, mattress pads, pillows and blankets.

If you're an AAdvantage member with American Airlines and flying on a First Class / Flagship First ticket to New York, you can earn more loyalty points faster. You'll also get mileage bonuses, extra baggage allowances and lounge access!

Take a look at our page on American Airlines to see all of the destinations the airline flies to/from.

Delta Air Lines, commonly referred to as Delta, is another major US-based airline and one of the world's oldest airlines in operation. It's headquartered in Atlanta, Georgia, and has hubs across other cities including Boston, Detroit, Los Angeles and New York, among others. Delta operates over 5000 flights daily across 52 countries on all six continents. First Class is offered across a broad range of Delta's fleet, including the Airbus A321s and Boeing 737-900ERs.

Complimentary earbuds are provided alongside 1000+ hours of free entertainment including the latest movies, popular TV shows and podcasts to keep you entertained!

Flying First Class with Delta means you're given a Sky Priority service. This involves faster check-in, security and baggage handling. You're also invited to board the plane first so you can settle in and enjoy the first-class experience even sooner.

Take a look at our page on Delta Air Lines to see all of the destinations the airline flies to/from.

Other Airlines with First Class Fares to New York

Below you'll find a table showing you other airlines besides American Airlines and Delta Air Lines that offer first-class tickets to all airports in New York and the cities that they fly from.

How to Book First Class Flights to New York

1. Firstly, navigate to the top of the page to find our search form. Enter your departure airport and set the arrival destination to New York (any airport in New York or choose from JFK, EWR or LGA). Enter the dates you plan to fly and how many passengers will be flying - in this section, you'll also need to set your preferred cabin class to 'First Class'. Press the 'Search Flights' button when you're ready! 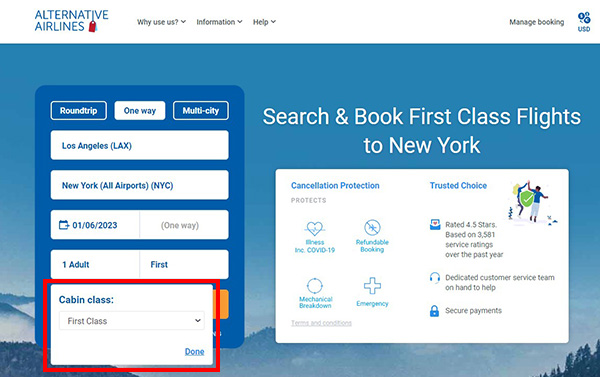 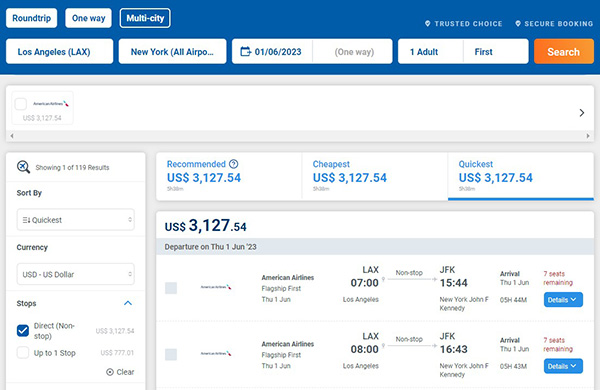 3. If the option is available, you can see in greater detail what's included in a First Class service with the flight you've chosen when you click on the 'Explore details' button. This will display information about the aircraft you'll be flying on, what the cabin is like, baggage allowances and other facilities available with the First Class ticket you selected. With 40+ ways to pay at Alternative Airlines, you can secure your booking with as much flexibility as you like - enjoy your trip! 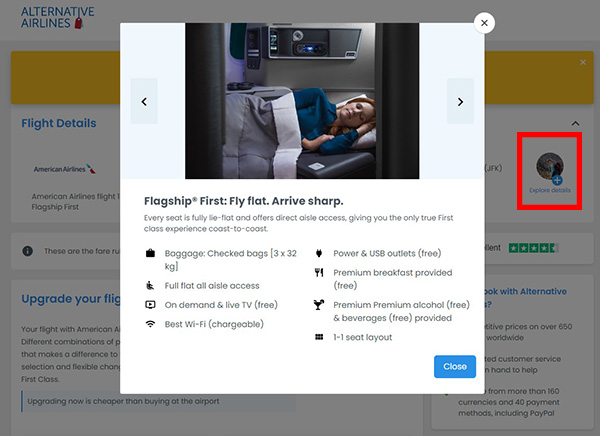 Save Money on First Class Flights to New York

Here at Alternative Airlines, we understand that First Class tickets are incredibly expensive and a burden to your finances. But this shouldn't stop you from being able to experience a First Class flight to New York! We have 40+ different ways to pay, including super flexible payment plans and Buy Now Pay Later options that can help you book your flights today and spread the cost of that First Class ticket over time! Our finance options can help you manage the budget for your First Class flight so you can make repayments on a weekly, bi-weekly or monthly basis, depending on the plan you've chosen. Please take a look at our Buy Now Pay Later guide for more information.

Are Business and First Class the same?

No, First Class and Business Class are not the same services. Business Class is just above Economy/Premium Economy and provides more legroom and comfortable seating. However, when you fly First Class, you'll get all of the benefits of Business and more, such as your own private 'room' on the aircraft depending on the airline you're flying with, and fine dining. If you're travelling to New York for business and don't want to spend too much money on the flight ticket, we recommend flying in Business Class.

Can I fly First Class to New York from within the US?