Flair Airlines is a Canadian low-cost airline based in Edmonton, Alberta in Canada. The airline operates chartered and scheduled passenger flights domestically within Canada on a low-cost model. From its hub in Edmonton International Airport (YEG), Canada, the airline operates services to domestic destinations in Canada such as Toronto, Vancouver and Calgary.

In addition to the main base of Edmonton International Airport (YEG), the airline has a secondary hub at Vancouver International Airport (YVR). 'Flair Air' was established in 2005 as a cargo airline operating services between Cuba and Canada, with occasional charter services. It wasn't until 2017 that the airline was renamed to Flair Airlines, and became a scheduled airline.

In junio 2017, Flair Airlines made it clear that it bought a travel company called New Leaf. Flair Airlines were operating Newleaf flights, as it wasn't licensed as an airline. Flair Airlines kept most of the Newleaf staff after the acquisition. The NewLeaf brand officially retired on julio 2017 and NewLeaf flights are now operated under Flair Airlines.

Flair Airlines currently operates 16 regularly scheduled flights within Canada using 3 Beinubf 737-800 that can carry a total of 567 passengers at one time.

Did you know that Alternative Airlines allows you to pay for your flights in over 160 different currencies and you can also do so with the Canadian Dollar?

Flair Airlines allows passengers one free personal bag weighing less than 7 kg / 15 lbs with dimensions no greater than 16cm x 33cm x 43cm (6in x 13in x 17in). This item must be able to fit under the seat in front of the passenger's seat.

Larger carry-on baggage for the overhead compartment can be purchased for an additional fee on the website or at the airport. If purchased, this carry-on bag can weigh a maximum of 10kg / 22lbs and measure a maximum of 22 x 40 x 55cm (9 x 16 x 22in).

The airline does not currently include any free checked baggage in its fares. However, items of checked baggage can be purchased online at the time of booking, or the airport for a higher price. Any item of baggage, regardless of the number of bags, must not weigh more than 23kg / 51lbs and must also fit within the combined linear dimensions (L+W+H) of 158cm (62").

Passengers can check-in online for their Flair Airlines flights. This process will save passengers time and money at the airport, and allow them to print their boarding pass at home to go straight to bag drop or security at the airport. Passengers can simply head to the Flair website with flight details at hand to complete the online check-in process and print their boarding pass.

Passengers who have not been able to check-in online must do so at the airport at the Flair posted ticket counter. This service will open 3 hours before the flight departure time and will close 60 minutes before the flight is due to depart.

Flair Airlines currently only offers Economy seating. However, there are two types of bundles, Basic Bundle and Big Bundle, in addition to the standard seat-only fare.

Enjoy comfortable and spacious seating with a good amount of legroom. The team will be on-hand to help.

There is currently no premium economy class onboard. For more facilities and extras, purchase a bundle mentioned above.

Business Class is currently not available.

First Class is currently not available.

This Flair airline does not currently provide any in-flight entertainment onboard its flights, as it prioritises keeping the cost down of flights with its no-frills policy.

Passengers can purchase snacks and sweets on board the flight. Items available include pastries, crisps, hummus, soup and chocolate.

Passengers can choose from a selection of drinks available for purchase, such as hot drinks of tea, coffee and hot chocolates, soft drinks such as iced tea, energy drinks and sodas, and also alcoholic beverages such as spirits or cocktails.

There are currently no WiFi services available onboard this airline.

Currently, there is no frequent flyer rewards program for Flair Airlines.

Flair Airlines currently have no airline alliances with any other airlines.

As of febrero 2021, Flair Airlines' fleet currently consists of 3 aircraft, with 14 more on order. As part of its recent expansion, the airline announced that it would be acquiring additional aircraft by early 2021.

Flair Airlines is based at Edmonton International Airport (YEG) in the Canadian Province of Alberta. It is the fifth busiest in the country in terms of passenger traffic, and the 9th busiest for aircraft movements. In addition, the airport facilitates airlines meaning it connects to other Canadian cities and also to major cities in the United States, Mexico, the Caribbean, Central America and Europe.

This airport is a focus city of Swoop and WestJet. Airlines that operate out of Edmonton International include Air Canada Express, Alaska Airlines, United Airlines and WestJet. 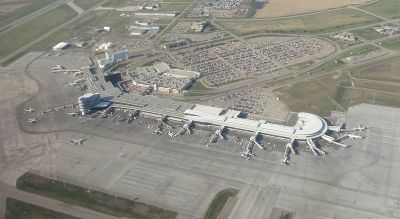 Please click on the logos below to find out more about airlines that fly similar routes to Flair Airlines:

Flair Airlines request that passengers needing mobility assistance such as wheelchair assistance, contact the airline directly at least 72 hours before flying. They will be able to arrange airport assistance as well as special aisle assistance whilst onboard.

Passengers who are visual or hearing impaired are requested to contact the airline directly to arrange any additional services or support for their flight.

Animals that are professionally trained and certified are allowed to travel with disabled passengers in the cabin at the customer's feet. This currently is at no extra cost to the passenger. Emotional support animals are also permitted, at the discretion of Flair.

Flair Airlines is Canada's first 'autism aware' certified airline. Contact the airline if you require assistance for your flight, or read our tips and advice for flying with ASD.

Can I buy Flair Airlines flights on finance?

Of course! At Alternative Airlines we take pride in offering 40+ payment methods in over 160 currencies. This includes a range of buy now, pay later options such as Klarna, Affirm, Zip, Uplift, Tabby and more. With Buy Now, Pay Later flights you can split the cost of your flight in easy-to-pay instalments. Please bear in mind that the payment method available at checkout will depend on the country you reside in.