Flying to Arches National Park has never been easier with Alternative Airlines, You can use our simple flight search tool to find the itinerary perfect for you. At Alternative Airlines we specialise in making the search process a simple and easy experience, helping you connect to regional and remote airports whilst offering the opportunity to spread the cost with our 'Buy Now, Pay Later' options. We ticket a whole host of US and international airlines making it easier for you to get to your local airport, you have never been closer to your destination. To book flights or learn more, use our flight search tool or speak to a member of our customer service team.

Arches National Park is located by the town of Moab in eastern Utah and runs along the Colorado River. The parks mars-esque features have been shaped over thousands of years and continually changes with wind flow meaning each visit will be different. Arches is famous for its natural sandstone arches and interestingly has the worlds highest density of them in one area. The United States National Park Service established Arches as a national park in 1929 with the ambition to preserve and protect natural geologic features.

The park is classed as a high desert as it has a peak altitude of 5,653 feet above sea level. The national park is a dream for hikers and explorers with numerous trails for you to walk and climb and astonishing sites to take in. Interestingly Arches National Park was the filming location of the movie 127 Hours, which was set in the park and Moab town. 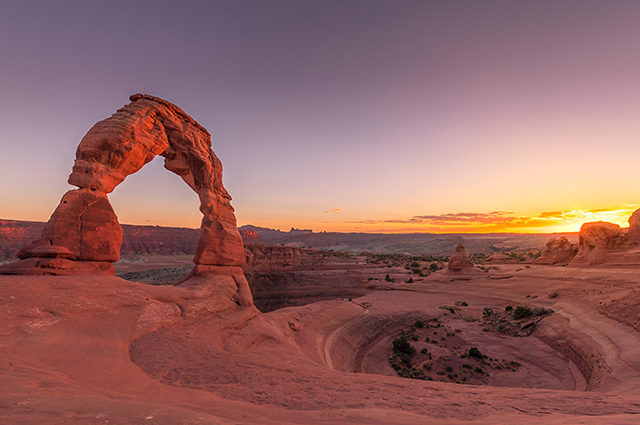 How to fly to Arches National Park

If you're choosing to fly to Arches National Park then the closest and quickest transfer is Canyonland Fields Airport as it is only a 20-minute drive from the park. This airport is serviced by 2 airlines with only 1 destination each, so maybe a limitation for you. However, with our virtual interlining it has never been easier to book flights with multiple carriers making this airport an option. You are able to connect via Denver or Salt Lake City to a wider route map. Use the flight search tool at the top of the page to find an itinerary best suited for you.

Flying from outside of the US

Arches has 3 airports located close, Canyonland Fields (CNY) is the closest being about 20 minutes to the entrance of the park. Airlines Grand Junction Regional Airport (GJT) is located slightly further but offers more airlines and destinations for you to travel from. The closest major international airport is Salt Lake City International Airport (SLC) which offers flights to North America and Europe, but this airport is over 3 hours away, so bear this in mind when booking.

Canyonland Fields is the closest airport but has a very limited route network with only 2 airlines and 2 destinations available. Salt Lake City and Denver International Airport are served by the airport so you could connect via these cities with Delta or United to reach Canyonlands with ease.

Reachable within 2 hours Grand Junction offers you a greater level of choice for route and airline travelled. 5 airlines service the airport, operating to multiple destinations within the US. You are able to fly to Las Vegas, Orange County, Phoenix/Mesa, Los Angeles, Dallas Fort Worth, Phoenix-Sky Harbour, Salt Lake City, Denver and Chicago O'hare.

Salt Lake City is the furthest airport within 4 hours of the national park. This airport offers the most international connections as well as the most US cities. If you choose to fly to Salt Lake City you will be able to travel directly from international destinations: Guadalajara, Cancun, Mexico City, Paris (CDG), Puerto Vallarta, San Jose del Cabo, Toronto, Vancouver, Calgary, Frankfurt and Amsterdam. The airport also offers services to over 40 US destinations making Salt Lake City an appealing option giving you more choice for flights to Arches National Park. 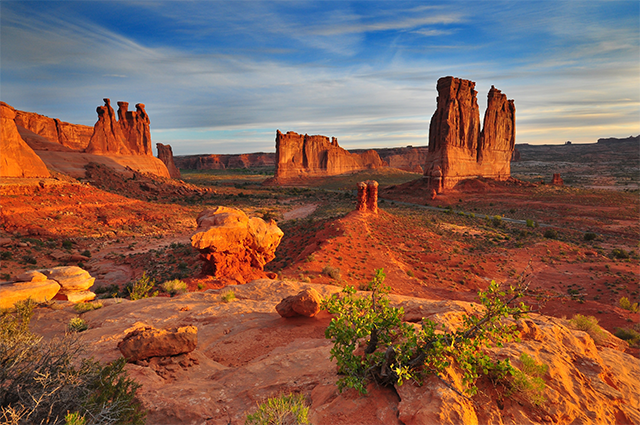 Yes, the national park is open 365 days a year and open 24hrs a day. It is noted that the park is busy during the summer months, specifically between March and October.

Do I have to pay to visit?

To help fund the upkeep of the park and other services you have to pay an entrance fee if you wish to visit the park. However, the price differs on the entrant. All private vehicles will cost $30, motorbikes $25 and any individual entering on foot will expect a $15 admission fee.

How do I get to Arches from the airport?

One of the easiest options to get from the airport to Arches is by hiring a car. In all 3 airports, there are car rental providers which means you can easily hire a car and drive to the national park, this also means that your transfer times can be reduced rather than getting public transport. Although this option offers you greater flexibility it may be quite costly. Roadrunner Shuttle and Moab Luxury Coach serve both Canyonland Field Airport and Salt Lake City Airport with the town of Moab. You are also able to get Amtrak Zephyr services from Salt Lake City and Grand Junction to Green River, a town 52 miles north of Moab. If you choose this option you will need to then also get a Roadrunner Shuttle and Moab Luxury Coach transfer.