Search and Book Flights to Coachella

Search and buy flights to Coachella with Alternative Airlines. Here’s some information about the festival, how to get there and some FAQs.

Coachella, officially known as The Coachella Valley Music and Arts Festival, is an annual music festival held in the Colorado Desert, California.

It takes place across 2 consecutive weekends in April, with the 2023 events taking place on 14th-16 abril and 21st-23 abril. 2023’s headliner acts have not yet been revealed however Frank Ocean has announced he will be one of the headliners for the star-studded festival.

This festival is so popular that people fly from all over the world to attend. Tickets go on sale for Coachella festival in January, often around the time the lineups are announced and can be purchased on the Coachella official website.

Get planning already and book your flights to Coachella now to make sure you are fully ready!

Coachella is located at the Empire Polo Club in Indio, California, meaning that although Coachella doesn’t have its own airport, the closest airport is Palm Springs International Airport. Airlines that fly to this airport include American Airlines, Delta Airlines and United Airlines.

However, due to prices and the location flying from, some people choose to fly to other nearby airports such as Los Angeles International Airport (LAX) or San Diego International Airport. You can then get a taxi, rent a car or get on one of the Coachella Shuttle buses from LAX to the festival, for about $50 dollars each way.

Obviously how you will get to Coachella will depend on where you are coming from. Domestic travel within the USA will be different to if you are flying from Europe. Here are some common routes of how to get to Coachella, and which airlines to fly with:

Palm Springs International Airport offers a wide range of domestic carriers to a host of US cities. If heading to Coachella through Palm Springs you'll easily be able to travel from Nashville, Indianapolis, Chicago, Dallas, Seattle, Atlanta, Boston, Los Angeles, New York, Las Vegas and more. This makes travelling to the festival really easy if you're a domestic traveller.

Flying domestically to Coachella means that you have more options of where to fly to, however it will still be cheaper to fly to LAX. From JFK airport, you can fly to LAX with airlines such as Alaska Airlines, Delta or American Airlines. Alternatively, if you want to fly to Palm Springs, we recommend flying with airlines such as United, from New York La Guardia with a short stopover at Houston Airport, or from New York JFK to with American Airlines with a short stopover at Phoenix Airport.

You can choose to fly to Palm Springs Airport from Las Vegas McCarran with American Airlines which will feature a stopover at Phoenix. Alternatively, you can fly directly if choosing to fly to LAX, with Alaska, United or Delta.

Palm Springs International Airport also has limited international destinations. The airline only offers direct services to Canada with the cities of Vancouver, Toronto, Edmonton, Calgary and Winnipeg being served. If travelling from further afield it may be beneficial to connect through one of the major carriers hub airports, such as with American Airlines and their Dallas hub. However, you also have the option of flying into Los Angeles or San Diego airports, which have a greater level of international routes.

Flying from the UK & Ireland

Flying from London Heathrow, we recommend flying to LAX as this has many more flights arriving from the UK. Airlines that offer non-stop flights include British Airways, Virgin Atlantic, United Airlines, Delta and American Airlines. Alternatively, you could plan a short stop-over in Vancouver, and fly with Air Canada, Westjet or Air Transat for a lower price. To fly to Coachella from Dublin, we again recommend to fly to LAX. Flights here from Dublin are considerably cheaper than flying to the closer Palm Springs. Aer Lingus fly direct from Dublin to LAX, but to make it cheaper, airlines that fly this route with a stopover at London Heathrow include American Airlines. Check out our blog to find out how to plan the perfect stopover.

Palm Springs International Airport is the closest airport to the festival being about 25 minutes away. The airport primarily offers routes to other US cities making it really easy and an attractive airport if flying from the US. The airport does have some international routes, however, these are only to Canadian cities. Palm Springs doesn't have any public transport facilities to get you from the airport to the festival, similarly, there is no shuttle service available. If you want to get from the airport to Coachella then you will either need to hire a car or take a private taxi service or ride-hailing app.

Los Angeles International Airport is the best option if you are travelling from an international destination as the airport offers routes to Europe, Canada, Mexico, Latin America, Asia and the Middle East. This makes it really easy to get from your home city to the festival. The airport has a wide range of airlines on offer meaning that there can be competitive prices from certain destinations. LAX also has a wide range of domestic routes making it easy for US travellers to get to Coachella. The airport has a wide range of public transport including busses, trains and metros to get you around the LA County with ease. However, during Coachella, there is a dedicated shuttle service to get you from the airport to the festival, making transfers easy. The airport has an abundance of car hire and taxi services on offer if you would rather have a private transfer.

San Diego International Airport is another great option for flying to Coachella. The airport offers numerous domestic routes as well as some international services to Canada, Asia and Europe. The airport has direct services to Miami, New York, Cancun, London, Tokyo, Zurich, Las Vegas, Chicago, Vancouver and more. The airport is connected to San Diego by the San Diego Metropolitan Transit System, which includes both rail and bus services. The airport hasn't got a direct transport link to the festival, however, there are multiple car hire and taxi companies you can choose to get you to the festival. 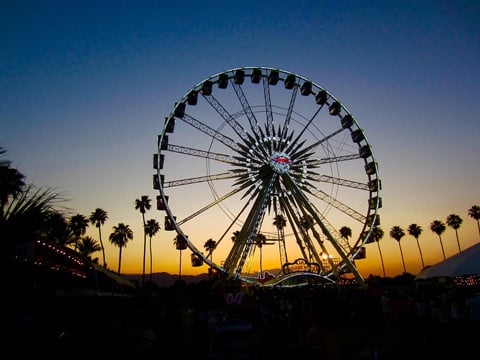 The Coachella festival will take place on 14th-16 abril and 21st-23 abril 2023. Book your flights now to ensure that you are fully prepared. Why not extend your trip to California and book for a longer time for more time to explore? Or make the most of a long-haul flight and visit multiple cities on the way.

Where is the Coachella Festival?

The music festival is located at the Empire Polo Club in Indio, California. This is in the Coachella Valley in the Colorado desert, where the festival gets its name from.

How do I get tickets to Coachella?

To purchase tickets for Coachella 2023 please visit the official Coachella website to do so. Tickets haven't publically gone on sale yet, but you can join the waitlist and reserve tickets for when they do. Be sure to book your flights to Coachella with Alternative Airlines soon to avoid disappointment!

How do I fly to Coachella?

How do I buy flights to Coachella?

Simply use our flight search tool, which is at the top of this page. Tell us your departure airport and arrival airport (LAX, SAN or PSP), set the dates and travel class as well as passengers and search. Top Tip easily find the flight best for you by filtering the results by price, time, airport and airline.

How to get cheap flights to Coachella?

The price of the flight depends on where you are flying from, but we recommend flying to LAX for Coachella as there is much more choice in flights and are generally cheaper. Please be aware that this airport is further away than Palm Springs International Airport.

How can I pay for flights to Coachella 2023?

We let you pay with over 160 currencies, including USD, CAD, MXN, EUR, GBP and more. We make paying even more flexible by accepting Visa, Mastercard, and American Express as well as 'Buy now, Pay later' options such as Zip, Klarna, Afterpay and more. To find out more about the 40+ payment methods available visit our payments page.

How do I get to Coachella?

If you are flying into Los Angeles International Airport, then great news, there is a dedicated shuttle service to the festival from the airport. If arriving into San Diego or Palm Springs then you will need to arrange a taxi or car rental to get you to Coachella.