Scotland is a country that is part of the United Kingdom (UK) and consists of over 790 islands. The country is located in the north of England and has multiple transport connections to the other parts of the UK. Scotland is famous for its sceneries, culture and food. The famous novel series, Harry Potter, was filmed in Scotland too, giving you the magic experience when you visit the country.

Finding your next flight to Scotland is easy, fast and convenient. You can start looking for your flight by entering the departing and arriving airport and travel dates to our search form.

Top Tip: Find out how Alternative Airlines helps you to locate affordable flights and make your flights more affordable by showing you flights from over 600 airlines and utilising payment options! 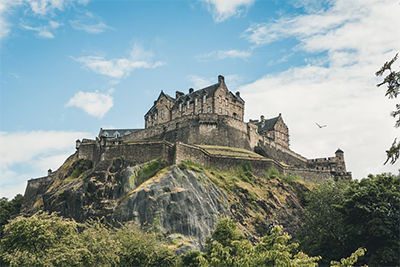 How To Fly to Scotland

At the capital of Scotland, the easiest airport to get access to is Edinburgh Airport (EDI). It's the sixth-busiest airport in the UK with a total of 14.7 million passengers. The airport is located 6 miles from the city centre with easy access to the M8 and M9 motorways. The airport has great international connections too with flights offered by Aegean Airlines, American Airlines, Delta, KLM, Ryanair, United Airlines and more!

On the west of Edinburgh, there's Glasgow Airport, the second busiest airport in Scotland. It's located 10 miles from the Glasgow city centre with easy access to the city of Glasgow by Glasgow Metro and a developing rail link. The airport provides links to domestic destinations as well as Dublin, Amsterdam, Dubai, Alicante and many more. British Airways, Blue Air, easyJet, Loganair, Lufthansa, TUi Airways and United Airlines are amongst the airlines providing connections to the airport.

The two international airports in Scotland offers brilliant connectivity for passengers for both domestic and international destinations.

At Alternative Airlines, we provide you with the tools that make it easier to locate cheap flights using an easy, fast and convenient flight search. Not only that, we believe how you pay is as important as finding the cheapest flight available for your route. Therefore, we make it possible to utilise our payment options to offer you flexible payment plans for your flights. You'll have the option to either pay in installments or pay back monthly, making your flights more affordable.

For UK residents you can choose to pay with Zip, Klarna, and PayPal Credit. Regardless of where you are flying to and from, you'll be able to utilise the payment options that splits the costs of your flights.

DISCOVER ALL OUR PAYMENT PLAN OPTIONS

How long does it take to fly to Scotland?

This depends on the airport you're departing from. For domestic travellers, you should expect the flight to be between 1 to 2 hours.

For international carriers, your flight time differs depending on whether you're flying on a non-stop service or on flight connections.

What airport do I fly to for Scotland?

There are many airports in Scotland. However, the main 2 international airports that serve Scotland are Edinburgh Airport (EDI) and Glasgow Airport (GLA). Both airports have great transport access in and out of the airport into the city.

Are Edinburgh Airport and Glasgow Airport the only airports in Scotland?

No, these aren't the only airports in Scotland but they are the main international airports in Scotland. There are many other airports in the countries. If you're not sure which airport to fly into, simply enter the city you wish to fly to and we'll show you the closest airport you could fly to.

Which airlines fly to Scotland?

Can I fly directly to Scotland?

Yes, you can! However, it'd depend on where you flying from.

Use our search form to determine whether you can fly direct to Scotland.

Can I fly directly to Scotland from the US?

Yes, you can! American Airlines, Delta and United Airlines are offering flights to the 2 major international airports in Scotland.

Do I need a passport to fly to Scotland?

This will depend on whether you already reside in the UK. In general, UK nationals won't need their passport to enter Scotland. In most cases, you can enter the UK with your driving license or any government-issued documents.

Where can I book flights to Scotland?

You can booking your flights to Scotland with Alternative Airlines using our search form. You can book tickets from over 600 airlines including UK and foreign airlines.