It has never been easier to book flights to the Euros 2022 with Alternative Airlines. With over 600 airlines ticketed we'll easily get you to your matches. It is guaranteed flexibility when you book with us as we allow you to pay with over 160 different currencies plus a whole host of payment platforms. Use Apple Pay, AMEX, Visa, or even use our 'buy now, pay later' partners Klarna, Laybuy, Zip and more. Use our search tool at the top of the page or contact our customer service team to find out more.

The UEFA Women's Euros is the 13th football event hosted by the UEFA. The competition helps to bring the national women teams in Europe the opportunity to compete against each other. In the 2017 competition, the Netherlands were the winners and in this years event, Northern Ireland will compete for the first time. The competition was due to be held in 2020 but due to the COVID-19 Pandemic, this was deferred to 2021, again because of the Pandemic a new date was set for 6 julio 2022. This year's competition will be held in England across 8 different towns and cities with 10 stadiums being used. The final will be held on 31 julio and played at London's Wembley Stadium.

London Heathrow Airport is one of the major airports in London, with numerous European and international routes. The airport is a great option if attending one of the events in the southern part of the UK. If attending any matches in London then Heathrow may be a good option for you, however, it would also be a good option if attending a game in Brighton, Milton Keynes or Southampton as London is still under 2 hours from these cities. Heathrow has an extensive route map allowing anyone coming to the game to fly in from Europe, North and South America, Africa, the Middle East, Asia and Oceania with a diverse portfolio of airlines. The airport is easily accessed with the Picaddily line, TfL Rail and Heathrow Express connecting the airport to the rail network. Local and national bus services also serve the airport making it easy to get to your final destination. The airport also has an abundance of car rental and taxi services making it easy to get private transfers to the games.

London Gatwick is the second busiest airport in the UK, after Heathrow and a great secondary option if attending one of the matches in London or Brighton. The airport is about 45 minutes by train to London Victoria or to Brighton station so is easily accessible by public transport. The airport is also served by both regional and national bus services if travelling to a game not in London or Brighton. The airport offers a range of both European and international destinations with cities such as Paris, Dubai, Alicante, Madrid, Toronto, Dublin, Amsterdam, Shanghai, Milan and more.

Manchester Airport is one of the major international airports in the UK and a good option for matches in northern England with a wide range of domestic and international airlines. The airport currently offers routes to various destinations across Europe, the Americas, the Middle East and Asia. Manchester is a great option if visiting games in Manchester or Leigh as the airport has direct rail and Metrolink services to the city centre. The airport also has great rail connections to the rest of north England with Transpennine, CrossCountry and Northern Trains services to the football games.

Southampton Airport is the closest airport to the matches played at St Mary's stadium. Like Doncaster Sheffield, the airport is not one of the major airports in the UK and offers a limited route network. The airport primarily offers services to other UK and Ireland cities but does also have some European services but are majority seasonal. This means that although close to the stadium it may be easier to fly into a different airport and travel down. The airport has direct rail links to the city as well as direct services to London Waterloo making it easy to get from the airport to the matches.

This airport is a good option if heading to any of the games in Manchester or Leigh. The airport has direct routes to numerous European destinations with EasyJet, Lufthansa, Ryanair and Wizz Air.

Luton airport is a good option if you have tickets for one of the matches in London or Milton Keynes. The airport's route map includes multiple counties across Europe and further afield served by Blue Air, EasyJet, El Al, Flyone, Ryanair, SkyUp, Sun Express, TUI Airways and Wizz Air.

London City is the smallest of the airports serving London and offers numerous destinations across Europe with a range of leisure and city destinations. This airport is a good option if going to any football matches in London. The airport is currently served by British Airways, KLM, LOT Polish, Loganair, Lufthansa, Luxair and Swiss International Air Lines.

Leeds Bradford Airport is a great alternative airport if travelling to one of the matches being held in Manchester, Leigh, Rotheram or Sheffield. The airport is served by Aer Lingus Regional, Aurigny, BH Air, British Airways, Eastern Airways, EasyJet, Jet2.com, KLM, Ryanair and TUI Airways to numerous UK and European destinations.

Bournemouth Airport is close to Southampton so is a great option to fly to. The airport is served by EasyJet, Ryanair and TUI Airways to primarily leisure destinations.

East Midlands Airport is another airport which primarily serves the midlands, but it is also a good option if you have a match in Milton Keynes as it is about 1hr drive. The airport offers numerous European destinations as Aer Lingus Regional, Aurigny, Blue Islands, EasyJet, Jet2.com, Ryanair and TUI Airways all operate to the airport. 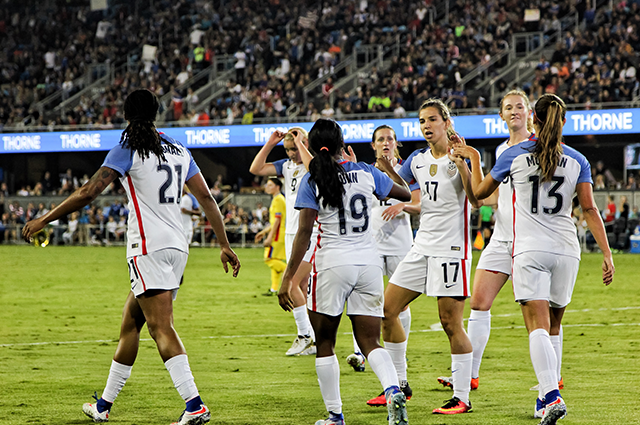 The women's Euros are being held in England, kicking off on 6 julio and finishing on 31 julio 2022, with the finale in Wembley Stadium.

Where are the UEFA Women's Euros?

The UEFA women's Euros are being held in England across 8 different cities in 10 various stadiums. The host cities will be London, Brighton and Hove, Manchester, Sheffield, Southampton, Milton Keynes, Leigh and Rotherham.

How do I get tickets to the event?

Tickets for the 2022 UEFA Women's Euros are on sale through the UEFA website, ticket prices range from £5 to £50.

How do I fly to the UEFA Women's Euros?

If you plan on flying to any of the football matches then there are numerous airports you can fly to. Read our guide above to find out which airport(s) are the best options for where your matches are.

Easily buy flights to the Euros by entering your departure airport and the destination airport, this may depend on which city is hosting the match. Set the dates of travel as well as the fare type and passengers then hit search. You'll be shown all the options available, but don't worry you can easily sort and filter. Easily filter the search results by airline, times, stops, connections, price and more, helping you find the best flight for your plans.

You can easily pay for your flights in over 160+ supported currencies plus n 40 different payment methods. Easily pay with a Visa, Mastercard, American Express, Union Pay card or use one of our 'Buy now, Pay later' options such as Zip, Klarna, Afterpay and more. If you want to find out more on how to pay and the payment options available then visit our payments page and to find out more about the currencies accepted then visit the accepted currencies page.