Travelling to Yosemite from the wider California area, US or internationally, Alternative Airlines have created a seamless and easy way to search for the flights you need. We make the process of searching and finding flights to remote and specialised airports easy, getting you that step closer to your destinations. We ticket a host of mainline US as well as regional and local airlines in one place. With our new interlining options you can easily connect to Yosemite. To book or find out more, search using our flight search tool at the top of the page or contact our customer service team.

Yosemite National Park is located in California's lush Sierra Nevada mountain range. This area of land is diverse culturally, geologically and biologically. Yosemite means killer, a name given to the land by the Miwok tribe and adopted by the arriving US settlers. The park was established as a UNESCO World Heritage site back in 1984 aiming at protecting the biodiversity of the park and pushing for greater environmental education.

Yosemite spans a colossal 759,620 acres and reaches a peak of 13,114 feet above sea level. The park can be divided into 5 diverse ecological sites, being, chaparral and oak woodland, lower montane forest, upper montane forest, subalpine zone, and alpine. Home to the ancient sequoia trees and cliffs of El Capitan and Half Dome make this national park a dream for climbers and hikers and offer a breath of fresh air for anyone looking to escape the city. 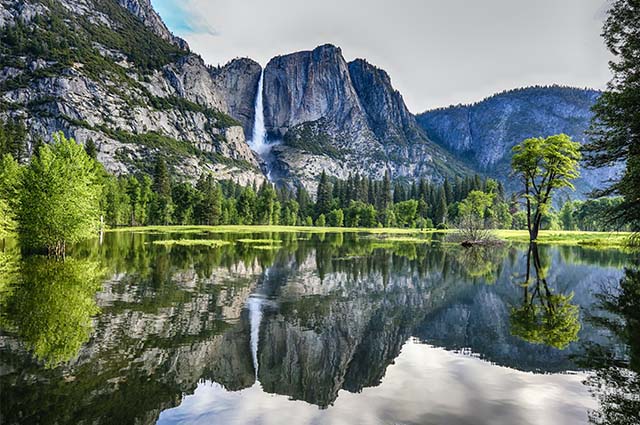 How to fly to Yosemite National Park

If you're choosing to fly to Yosemite National Park then the closest and easiest to access is Fresno Yosemite International Airport (FAT). 12 airlines service this airport with direct destinations including Los Angeles, Seattle, Chicago and Dallas. If your departure city is not serviced from FAT then you may need to transfer at another major airport or arrive at a further away airport. However, Fresno Yosemite International Airport is closest so makes transfers to the national park. Use our flight search tool to see what itinerary is best for you.

Both Aeromexico and Volaris operate to FAT allowing for an international route network for the airport. You have the opportunity to travel from Guadalajara, León/El Bajío, Mexico City and Morelia. If travelling from further afield, you have the option of connecting via Mexico instead of the US, giving more flexibility and price competitiveness.

Yosemite National Park is not located near any airports, with the closest being 95 miles away in Fresno. However, because of this distance, there are 9 airport options for your to choose to suit your schedule.

The closest airport to Yosemite National Park is Mammoth Yosemite Airport, this is a regional airport with limited services and no international destinations. The airport only has one operating airline servicing seasonal routes to Burbank, Los Angeles-Hawthorne and San Diego-Carlsbad.

Located closest to Yosemite is Merced Aiport, this is a regional airport with limited services and no international destinations. The airport only has direct routes to Los Angeles and Las Vegas, so use our flight search tool to interline your flights to this airline.

Falling within 125 miles of Yosemite, Stockton airport offers another alternative for you. With two major airlines operating routes to Los Angeles, Las Vegas, Phoenix/Mesa, Phoenix-Sky Harbor and San Diego making it easy to connect onto a major airline hub.

Furthest away is Reno-Tahoe airport, being just under 180 miles from Yosemite. The airport offers some domestic services and a limited international route portfolio only servicing 1 destination in Mexico.

Another airport you can choose to fly into is Oakland International, located close to San Francisco and 179 miles from Yosemite, Oakland is great for US domestic travellers. The airport does offer some international destinations such as the Azores islands and Mexico.

Offering some domestic and some international destinations Sacramento may be a good choice for you and is under 4 hours transfer.

Slightly closer than San Francisco but with vast domestic connections and some international services San Jose is another option for flights to Yosemite National Park. Transfers between the airport and park are around 4.5 hours so a car or form of vehicle transfer will be required.

San Francisco International Airport (SFO) is the largest major international airport nearest to Yosemite. Just under 5 hours from the national park you can arrive here on international flights from Asia, Europe and the Middle East and head up to the Sierra mountains. The airport is also well-connected with the rest of the US including Hawaii and Alaska making transfers into San Francisco a breeze. 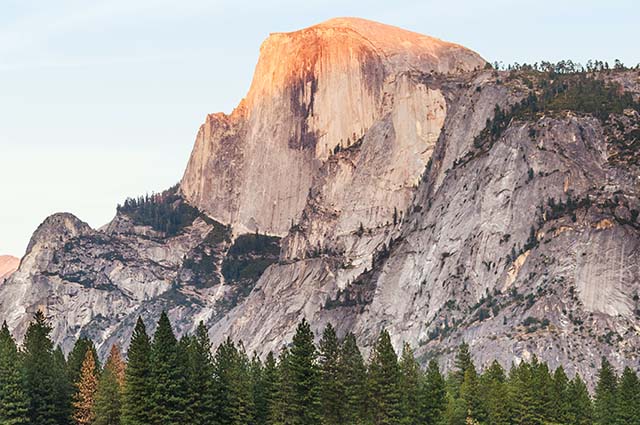 Yosemite National Park is open 365 days a year for you to visit. However, YARTS end their 4 bus services in autumn/fall time so if flying in and planning on using this service please come in spring or summer. Similarly, because of snow and winter conditions, some roads are forced to close making driving conditions difficult.

How do I get to Yosemite from the airport?

Any airport you fly into will require some form of transfer to get you to Yosemite. The easiest option would be to hire a rental car at the airport and drive the remaining distance to your destination. Taxi's and ride-hailing apps often help ferry you from the airport to the national parks, however, both options can be costly. If arriving into Merced, Fresno-Yosemite, Mammoth or Reno/Tahoe airports then you can choose to get the dedicated YARTS bus service to Yosemite National Park. There are 4 dedicated lines so please check before booking which one is best for you. All airports are also serviced by Greyhound bus lines and Reno/Tahoe additionally has a bus link with Eastern Sierra Transit. Don't fancy the bus? You can also choose to travel upstate with Amtrak services, check their website for more details. Please note that YARTS buses don't operate in the winter so bear this in mind when booking your flights!