flyGlobal is an airline based in Kuala Lumpur, Malaysia. It operates charter flights across Asia, with a particular focus on flights to the Middle East.

It was founded in 2016 and commenced operations in 2017 with its wet-lease to Biman Bangladesh Airlines, operating flights over the Hajj period. In noviembre 2017, it operated services for Nesma Airlines between Kuala Lumpur and Jeddah, accommodating for Malaysian pilgrims.

flyGlobal has a fleet of Boeing 777 aircraft. In total, it has four models from the 777 family.

Due to the nature of the company offering wet lease services, the baggage allowance is dependent on the company that it's operating on behalf of.

Due to flyGlobal operating charter services and wet lease services, the check-in information is dependent on the company it is operating on behalf of.

Please click on the logos below to find out more about airlines that fly similar routes to flyGlobal:

Kuala Lumpur International Airport is Malaysia’s main international airport and the hub airport for flyGlobal. The airport is the largest and busiest airport in the country in terms of passenger traffic, handling almost 60 million passengers each year. It's also a key airport in the region of Southeast Asia, but also worldwide. 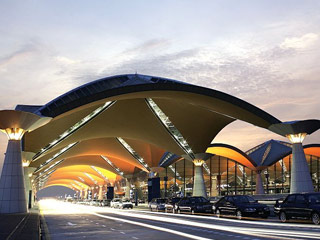