Make a Flynas Booking and Find Some Amazing Deals

The airline has its main operating base at Jeddah, at King Abdulaziz International Airport, with its head office located in Riyadh. In addition, the airline has secondary hubs in Riyadh, Medina, and Dammam.

At the time they launched, the only other Saudi airline was Saudi Arabian Airlines. Under the Nas Air name, they became the only Saudi low-cost airline in the country. In 2009, they launched its first international route connecting Assiut with Sharm el-Sheikh. In November 2013, the airline changed its name to Flynas from Nasair. After some success, flynas later launched more international routes to cities in Turkey and Pakistan and more destinations later on. In April 2014, it became the first low-cost airline to serve a Saudi Arabia to UK route, with its Jeddah to London Gatwick route.

In 2012, they made a codeshare agreement with Etihad, which placed the airline's code on flights from Abu Dhabi. The codeshare agreement between flynas and Etihad as been highly successful and still stands today. In 2013, flynas rebranded and changed its name from Nasair to flynas, which it still operates as today.

Correct of November 2019, the flynas fleet contains only Airbus models, with 4 different types. The fleet currently has 32 aircraft, although there are an additional 127 on order. 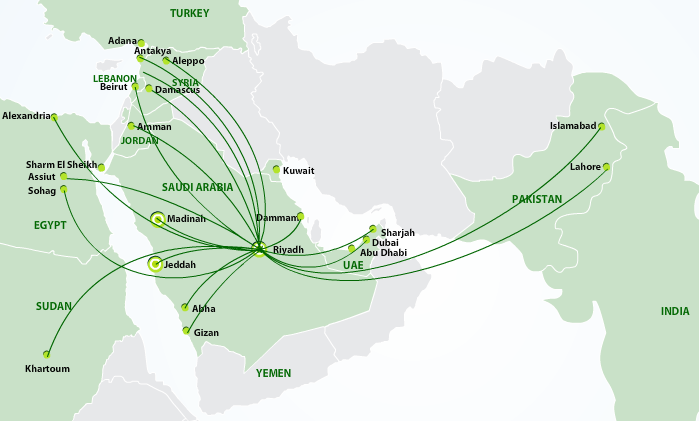 Passengers are permitted one item of cabin baggage, or carry-on baggage. This item must not exceed the dimensions 56 x 36 x 23cm and 7kg in weight.

In addition, passengers are permitted a small laptop bag or handbag, which must be able to fit under the seat in front of you.

Checked baggage allowance is dependent on the class and route flying. The dimensions of any bag must fit within 75 x 33 x 50cm.

Online check-in is available for most flights operated by Flynas. This service will open 48 hours before flying, and will close 2 hours before the flight departure for international flights, or 1 hour before for domestic flights.

flynas also offer the online check-in service from their mobile app. This is only available for selected flights operated by flynas departing from Saudi airports and Dubai International Airport. Passengers checking-in using the mobile app can also obtain and download a mobile boarding pass.

Passengers can also check-in for their flights at the airport, where they can visit the check-in desk. It is recommended that passengers arrive 3 hours before scheduled departure time, to ensure there is enough time to check-in, check any baggage and pass through security. Check-in will close 60 minutes before departure.

One of the busiest airports in Saudi Arabia with passenger and cargo flights. The airport is also a hub for Saudia. 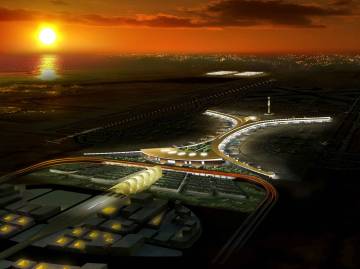 Economy Class passengers can order food and drink from the airline's in-flight menu with hot, cold, alcoholic and non-alcoholic options. Those flying on the Premium fare are given a complimentary snack.

The Economy Class cabin is set out in a 3 x 3 formation and is designed to give sufficient legroom and space for each passenger. There are a number of different seat options available for those who choose to pre-select their seats, including extra legroom, front row and 'ladies only' seats.

Flynas do not currently offer a premium economy class.

The Business Class cabin offers a luxurious in-flight experience with a number of added extras.

Passengers flying in Business Class are given an extended baggage allowance, free cancellations/changes on all flights and access to the airline's executive lounge.

After passengers board with priority boarding, the airline's Business Class flight attendants will serve the Business Class cabin with special care, attending to all needs.

Passengers can enjoy complimentary hot meals and snacks, as well as hot, cold, alcoholic and non-alcoholic drinks during the flight.

The Business Class cabin has just 8 seats, for an exclusive in-flight experience. Seats are set out in a 2 x 2 formation, with a seat pitch of 48 inches. All seats are made from genuine leather and guarantee arelaxed and comfortable journey.

There is currently no first class cabin onboard Flynas planes. Upgrade to Business class for a luxurious flying experience.

Please click on the logos below to find out more about airlines that fly similar routes to Flynas:

Flynas do not currently provide its passengers with any form of in-flight entertainment in terms of movies or TV shows. However, they welcome passengers to bring their own devices on board to keep themselves entertained and also provide an in-flight magazine for passengers to read.

Passengers in business class can enjoy complimentary meals, snacks and drinks included as part of their ticket price. Passengers in economy class do not get food included on their ticket, however, food can be pre-purchased as an add-on before flying (at least 12 hours before travelling). Food on the pre-order menu includes breakfast items, salad, pasta, curries, kebabs, sandwiches and also children's meals.

Flynas do not currently provide any WiFi services on board their flights.

Flynas have their own frequent flyer programme called nasmiles. This offers frequent flyers the opportunity to collect miles and then spending them on flights, seat upgrades, excess baggage or airport lounge access.

Flynas is not currently part of any airline alliance. However, it has codeshare agreements with Etihad and Pegasus Airlines.

Children under 12 years old and travelling on their own are not allowed to fly, unless accompanied by a responsible adult of 18 years or older who is their parent, guardian or companion. The airline does not provide an unaccompanied minor service.

Passengers will need to provide details of their reduced mobility or special needs at the time of booking. Some passengers may need to provide a valid doctors certificate to state the nature of the illness and declaring that you are 'fit to fly'.

Book your flynas flights in English when you choose to book with Alternative Airlines. We are a reliable company that you can trust to book your flights in a friendly and helpful manner.

The 3 weekly flights to each destination from Riyadh, Jeddah and Dammam start June 8

flynas, the national low-cost carrier airline of Saudi Arabia, announced the launch of direct flights to Tbilisi in Georgia, Vienna in Austria, Baku in Azerbaijan and Athens in Greece. This step is a part of flynas’ expansion strategy for the year 2018, which aims to reach as many destinations as possible.

Flights to these destinations will be launched on June 8, 2018, with 3 flights weekly to each destination, and is available for booking through all flynas booking platforms.

Bandar Al-Mohanna, CEO, said the new flights will be launched from Riyadh, Jeddah and Dammam during the fourth week of Ramadan, in order to meet the growing demand for the favourite summer destinations of customers . He confirmed their eagerness to constantly develop low-cost airline experience and increase its services.

Al-Mohanna noted that the airline is proud to be the first national carrier airline to launch direct flights to Georgia, Azerbaijan, Austria and Greece, to meet the passengers’ needs for new destinations. He added that they will continue to expand and reach desired destinations of its passengers.

They will launch direct flights to the three large Saudi Arabian cities - Riyadh, Dammam and Jeddah, starting June, this year. Direct flight to-from Tbilisi will be conducted three times a week, according to Ministry of Economy and Sustainable Development of Georgia.

As it was noted during the meeting, the interest toward Georgia as a tourist destination has been increased recently within the countries of the Gulf, which also include Saudi Arabia since the tourist flow to Georgia in 2017, compared to the previous year, was increased by 61%.

Director General noted that that the flights will be implemented from the three largest cities of Saudi Arabia since the interest in the country toward Georgia as a unique tourist destination is huge. It was noted that the marketing campaign is to be provided in Saudi Arabia, in order to further increase the number of tourists from this country.

Director of the JSC United Airports of Georgia of the Ministry of Economy and Sustainable Development, Ketevan Aleksidze and the Head of the Georgian National Tourism Administration, Giorgi Chogovadze also attended the meeting.

The national carrier of Saudi Arabia began operations in February 2007 under the name of ‘Nas Air’. In November 2013, it changed the name to the flynas, and currently owns 31 aircraft. The airline operates in 35 directions. The Voyager will represent the flynas in Tbilisi.