Make a FlyPOP Booking and Find Some Amazing Deals

flyPOP was founded in 2014 and is a start-up international airline based at Stansted Airport, in the United Kingdom. The airline will operate low-cost, long-haul flights to a number of international destinations, but initially between Britain and India and South Asia.

The start-up plans to start by launching nonstop services between the UK and Amritsar, in India, to be followed by Ahmedabad, also in India.

flyPOP is also committed to protecting the planet and plans on becoming the first carbon neutral international airline in the world. You can discover more about environmentally friendly airlines by visiting our guide to eco-friendly airlines.

flyPOP hopes to launch operations in late 2021. In the meantime, you can take a look at our list of alternative airlines below to discover airlines that currently operate flights between the U.K. and India/South Asia.

The airline plans to initially operate three times weekly from London Stansted to Ahmedabad (Gujarat) and Amritsar (Punjab), in India.

The airline will begin operating in late 2021 by flying between the following destinations:

flyPOP will begin by initially flying three times a week to Ahmedabad and Amritsar.

The airline will have one class of service: Economy. This is to ensure a single rate (the lowest possible rate) of Air Passenger Duty (APD) for passengers.

The A330 has been designed to provide passengers with a great in-flight experience. The airline has stated that very seat will have a USB power point socket. Snacks, meals, and drinks will be available for purchase during the flight.

There will be 400 standard Economy seats available. The twin aisle configuration and extra cabin headroom in the A330 has been designed to improve passenger comfort during the flight. The airline has stated that seats will have a 31 inch pitch, with padded headrests and ample storage.

Extra legroom seats will also be available for an upgrade fee.

flyPOP has announced that the aircraft will have a Wi-Fi option for those who want to watch their entertainment through their own digital devices. An entertainment streaming service (via onboard WiFi) will be available. Please note that internet connectivity will have a small additional charge.

The airline has yet to release a menu, but passengers will be able to purchase snacks, drinks, and/or meals during their flight.

The airline has stated that passengers will be able to order food and beverages via their mobile devices.

flyPOP will offer a selection vegetarian and non-vegetarian options, including authentic Punjabi and Gujarati dishes, which will be served in generous 'thali-sized' portions.

flyPOP has stated that all standard Economy seats will include one piece of cabin baggage. Cabin bags must not exceed the maximum dimensions of 56 x 45 x 26 cm, and have a maximum weight of 8kg.

Cabin baggage will be complimentary, but additional hold luggage will be charged. More information has yet to be announced by the airline.

This information has yet to be announced by the airline.

The airline has yet to publish a statement regarding recommended check-in times. However, in most instances, London Stansted Airport recommends that passengers arrive as early as possible for all international flights, usually about 2 hours before scheduled departure.

The airline will fly an Airbus A330, which will have a seating capacity of up to 400 Economy seats.

This information has yet to be announced by flyPOP.

London Stansted Airport is an international airport located in Essex, 42 mi northeast of Central London. The airport serves over 160 destinations across Europe, Asia and Africa. Other low-cost carriers that have a base at the airport include Ryanair and Jet2.com. Other international airlines to fly to/from Stansted include easyJet, Pegasus Airlines, Ryanair, Tui Airways, and Jet2.com. Find out more by visiting our full guide to Stansted Airport. 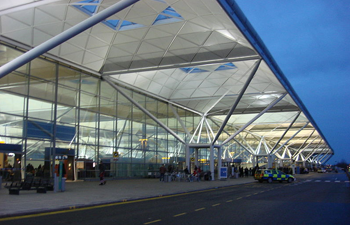 The following airlines currently operate flights between the U.K. and India/South Asia:

UK startup flyPOP has stated that it plans to launch in 2021, after receiving 'a significant investment' from the U.K. government. Although no date has yet been set, it is expected that the airline will commence flights towards the end of the year. The carrier will operate scheduled flights to India and is punted as the UK’s only international long-haul low-cost airline. The airline is also currently in a process of negotiating low-cost airport deals in the UK and India and is still in discussions with aircraft manufacturers to secure deals that would enable the airline to offer its passengers the lowest fares possible.