The airline is based at Tbilisi International Airport and flies to many destinations in Europe and Asia. Privately owned and professionally run, Georgian Airways flies to over 25 destinations overall.

The airline was founded in septiembre 1993 under the name Airzena and began operating charter flights to the United Arab Emirates, Italy, China, Egypt, India, Syria. Shortly after, it started operating its first scheduled flights to Austria.

It has a codeshare agreement with airBaltic, Air France, Armenia Aircompany, Austrian Airlines and KLM.

Georgian Airways flies to a number of destinations, with connections to cities such as Vienna, Amsterdam, Vienna, Athens, Batumi, Moscow, London, Tel Aviv and many more. 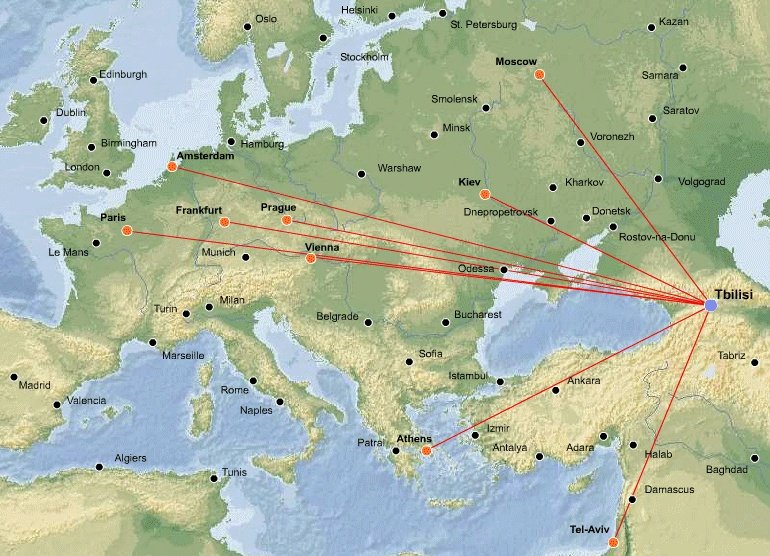 Passengers in Economy Class are entitled to one item of carry-on baggage that is no heavier than 8 kg.

Passengers in Business Class are entitled to one item of carry-on baggage that is no heavier than 12kg.

Baggage must not exceed the overall dimensions of 155 cm.

Each piece of checked baggage must not exceed the overall dimensions of 115 cm, regardless of the class/fare purchased.

Ther Economy Class cabin is both clean and comfortable. There are three different economy fares:

Regardless of which fare you choose, the in-flight experience in Economy Class remains the same.

Economy offers comfortable padded seating. Depending on the aircraft flown on, the Economy Class cabin has between 50–132 seats.

Business Class is Georgian Airways most luxurious cabin class, with a special service delivered by the airline's attentive cabin crew, in an exclusive separate section of the plane.

The business class fare includes a special onboard three-course meal, included in the fare.

Business Class flights are fully refundable and exchangeable without any surcharges.

Business Class offers an upgraded seat on the plane, in a private and separate cabin. Passengers will enjoy comfortable and spacious seating with a generous amount of legroom.

Passengers can enjoy reading materials from the airline's in-flight magazine.

There's no in-flight entertainment system on any of Georgian Airways' flights. Some of its larger aircraft have TV screens fitted, however, these are inactive.

WIFI isn't available on any flight operated by Georgian Airways.

Georgian Airways offers hot meals, hot, cold and alcoholic drinks and a selection of snacks onboard its flights. The menu differs for Economy Class and Business Class passengers. However, regardless of the cabin class, food is always made from locally sourced, high-quality food that is inspired by Georgian cuisine.

Passengers in Economy Class can choose between a selection of salads, Georgian cheeses, main meals (lamb, beef, poultry or fish) that are cooked Georgian style, khachapuri and bread, cakes, tarts, muffins and fruit.

Business Class passengers also have a choice of some of Georgia's finest red and white wine.

Passengers can check-in online for their flights from 24 hours before departure by visiting the airline website.

Passengers can also check-in for their flights at the airport by visiting the check-in counter. It is recommended that passengers arrive three hours before the scheduled departure time to ensure they have enough time for check-in, security and to get to the boarding gate.

Georgian Airways doesn't have a frequent flyer program at this time.

Georgian Airways isn't currently a member of an airline alliance. However, it does have an interline agreement with the following airlines:

Georgian Airways has a mixed fleet, with larger aircraft from manufacturers Boeing and Embraer and smaller, regional jets from Bombardier. Overall, the airline has 9 aircraft within its fleet.

Shota Rustaveli Tbilisi International Airport (TBS) is the main international airport in Georgia and is the hub airport for Georgian Airways. The airport is located southwest of Georgia's capital Tbilisi.

Other airlines that fly from and to Tbilisi International Airport include Turkish Airlines, Aeroflot, Air Astana, Armenia Aircompany, Flydubai, Wings of Lebanon, Qatar, YanAir and previously Saratov Airlines before it ceased operations.