Make a Germanwings Booking and Find Some Amazing Deals

Germanwings is a German low-cost airline, based in Cologne, Germany. It is a wholly-owned subsidiary of Lufthansa, and operates under the Eurowings brand since being integrated in 2016.

The airline was founded in 1997 by Eurowings, who wanted to create a low-cost department. This department became a separate company in 2002, called Germanwings. In 2009, Germanwings became a wholly-owned subsidiary of Lufthansa, taking over many of Lufthansa's short-haul flights in 2012, and obtaining part of the Lufthansa fleet. By the end of 2014, Germanwings took over all of Lufthansa's German routes, except those to and from Munich and Frankfurt, and from Dusseldorf to Newark and Chicago.

In 2015, however, Lufthansa announced that the Germanwings brand would be discontinued, and replaced and merged with the Eurowings brand, including things such as the airline's website and routes.

Germanwings still operated under its own IATA code (4U) under the Eurowings brand until marzo 2014, when it was abandoned and replaced with the Eurowings IATA (EW).

To learn more about the current operating brand, Eurowings, head over to that page now.

As of octubre 2019, Germanwings still consisted of the following fleet, which is operated by Eurowings.

As Germanwings now operates under the Eurowings brand, the following is the current baggage allowance for the operating brand; Eurowings.

Passengers are permitted 1 x cabin bag, weighing a maximum of 8kg and with the maximum dimensions of 55 x 44 x 23cm.

Passengers may be permitted free checked baggage, depending on the ticket type purchased. Check your ticket for details of your allowance.

Passengers who have not checked in online can do so at the airport, which opens 2 hours before departure and closes 40 minutes before your flight is due to depart.

Cologne Bonn Airport is one of the 6 German Airports the Germanwings used as a hub before being merged with Eurowings, and is still used as a hub by Eurowings. This airport is Germany's 6th-largest airport, with 2018 seeing the airport seal with nearly 13 million passengers. Airlines that operate services from this airport include Ryanair, Corendon Airlines and TUIfly Deutschland. 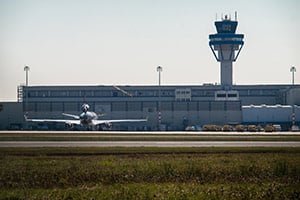 Before merging with Eurowings, Germanwings operated an economy class only fleet. There were different fares to personalise your flying experience, such as an added cabin or checked baggage, free drinks and snacks and priority boarding.

For up-to-date class information for Eurowings, visit that page.

Please click on the logos below to find out more about airlines that fly similar routes to Germanwings:

Before merging with Eurowings, the airline only provided an inflight magazine for entertainment, called GW. This was available in both German and English.

Germanwings used to offer a buy on board service called Sky Bistro, as they did not offer any complimentary catering for its flights. This Sky Bistro allowed passengers to purchase meals, snacks and drinks (alcoholic and non-alcoholic) for their flight. Passengers who were on the 'Best' fare often got free snacks and drinks included in their fare.

There was no WiFi provided onboard Germanwings flights.

Germanwings has historically been a member of two frequent flyer programs. The Boomerang Club is now part of Eurowings, and it allows flyers to collect 'miles' per every €1 spent, in order to gain multiple benefits such as flights and bonus offers.

Miles & More is another Frequent Flyer program, which is part of the Sky Team Alliance. Germanwings was part of this program due to its ownership by Lufthansa, who launched the program. There are three types of miles within the program: Award Miles, Status Miles and HON Circle Miles.

Germanwings was part of the Sky Alliance, because its parent company was Lufthansa. They intensified their cooperation with Star Alliance by signing an extensive codeshare agreement. This agreement will apply to 15 routes and long-haul flights by Singapore Airlines from Munich, Zurich and Manchester.

Thinking of flying with either a service animal, pet, or an emotional support animal, see all information and advise by Alternative Airlines about taking an animal on a plane.

“After careful evaluation, it is clear that diversification of the client portfolio, focus on the team & customer satisfaction, LEAN-based management (running an organization in the concept of continuous improvement) has lead FL Technics to a great year”, notes Zilvinas Lapinskas, CEO at FL Technics. He compares recent financial results to 2015, when the major client at that time announced ceasing all operations and left FL Technics with €8 Million of unpaid bills. The company finished that year with the loss of over €11 Million.

Last year FL Technics launched the Bay system (dedicated teams are working on one aircraft) and have invested in mechanical training of the in base maintenance staff thus attracting 1st-tier European airlines as clients.

Currently, Swiss air, Luxair, Eurowings, Germanwings, Pegasus, Corendon airlines are maintained in FL Technics hangars. According to Zilvinas, FL Technics had served the aircrafts from 27 airlines from 17 countries in two hangars in Lithuania.

Last year the company has attracted 30 aircrafts for CAMO services, and it is further expanding with successful OASES Aviation Maintenance software implementation. DOE team closed the year with 85 aircraft modifications.