Groupe Transair, or simply Transair, is a Senegalese airline that is based at Dakar Biase Diagne International Airport. The airline primarily flies scheduled passenger services within Senegal but also flies internationally to other destinations within West Africa. In total, the airline operates over 60 flights per week, with around 40& domestic and 20 international. The airline stands strong as one of the leading airlines in Senegal.

The airline was launched in 2010. It initially flew only domestic flights and launched with a route between Dakar and Ziguinchor, which still remains its most popular route to this day.

The airline flies to a number of destinations across Senegal including its hub in Dakar, Cap Skirring, Kolda and Ziguinchor. In addition to this, it flies to Banjul (Gambia), Freetown (Sierra Leone), Guinea-Bissau (Bissau) and more.

Below is a full list of the destinations that Transair flies to. 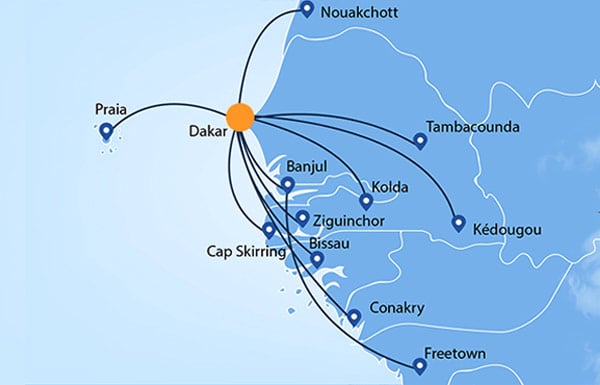 One piece of carry-on baggage with a maximum weight of 5kg. In addition to this, passengers may carry a personal item, which can be an item such as a purse or laptop bag. The personal item must be able to fit under the seat in front of you.

Transair has different checked baggage rules, depending on whether the flight is international or domestic.

Adults and children are allowed one piece of checked baggage with a maximum weight of 20kg.

Babies/infants are allowed one piece of checked baggage with a maximum weight of 10kg.

Adults and children are allowed one piece of checked baggage with a maximum weight of 30kg.

Babies/infants are allowed one piece of checked baggage with a maximum weight of 10kg.

Economy Class is the only cabin class available on Transair flights. The service is delivered by the airline's professionally trained cabin crew. Food and drink are available to order once in-flight, with a variety of snacks and drinks on offer.

Seating is set out in a 1 x 2 formation. Each seat is made from genuine leather gives ample pitch and width, for a comfortable journey.

Snacks and drinks are served on all flights, regardless of the length of the flight. With a choice of cold juice and soda or hot drinks, such as tea and coffee.

On longer flights, passengers are given a meal. The meal type will depend on the time of day flown, with breakfast, lunch and dinner offered.

Groupe Transair doesn't offer online check-in for any of its flights.

Passengers have to check-in for their flight at the airport. This can be completed by visiting one of the check-in desks and presenting the relevant travel documents to a check-in agent.

The airline has a fleet of entirely Embraer aircraft. Within the fleet, the airline uses EMB-120RT and EMB-145ER equipment.

Looking for alternatives to this Transair? Search for flights for Air Senegal, Air Côte d'Ivoire or Cabo Verde Airlines.