Make a Gulf Air Booking and Find Some Amazing Deals

Gulf Air is the national flag carrier of Bahrain and is headquartered in Muharraq with its main hub airport at Bahrain International Airport. The airline flies to many destinations over 30 countries in Africa, Asia, Europe and the Middle East.

The airline is one of the oldest carriers in the Middle East, with its history dating back to the 1940s, with an air taxi service between Doha and Dhahran. This air taxi service was registered in 1950 under the name Gulf Aviation Company Limited, with major stakeholders including British Overseas Airways Corporation (BOAC). In 1974, the governments of Bahrain, Qatar, Abu Dhabi and Oman each gained a 25% share in Gulf Aviation, where it was soon rebranded to Gulf Air. In 2002, however, Qatar announced that they would be withdrawing from Gulf Air to focus on its own flag carrier, Qatar Airways. Abu Dhabi did the same in 2005, announcing their focus on Etihad Airways, with Oman withdrawing in 2007, leaving Bahrain to claim full ownership of the airline.

Gulf Air's current fleet consists of a mix of Airbus and Boeing aircraft as per the table below (correct as of octubre 2019):

Gulf Air currently flies to over 30 countries, as per the tables below (correct of noviembre 2019): 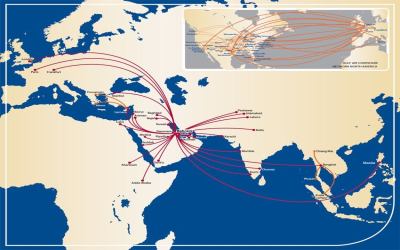 Passengers travelling in the Falcon Gold class are permitted 1 x 9kg cabin bag and one briefcase. The bag must not measure more than 55 x 40 x 30 cm.

In addition, passengers are allowed a personal item onboard with them. This may be items such as a laptop, purse, umbrella or book etc.

Passengers in economy (on friendly & freedom fare or Falconflyer redemption ticket) are permitted 2 bags weighing a maximum of 23kg each.

Passengers in Falcon Gold (all fare family tickets or Falconflyer redemption tickets) are permitted 2 bags weighing up to 32kg each.

Passengers can check-in online via the Gulf Air website, from 24 hours before flying, up until 90 minutes before your flight is due to depart. Passengers can choose their seat at check-in, and print their boarding pass easily at home.

Bahrain International Airport is located in Muharraq and is the hub for the national carrier of Bahrain Gulf Air. It has two runways and can handle nearly 10 million passengers every year. Other airlines which fly to and from this airport include Air Arabia, Air India, Cathay Pacific, Etihad Airways, Georgian Airways (previously known as AirZena Georgian), Iran Air, Iraqi Airways, previously Sudan Airways, Jet Airways, Kuwait Airways and many others. 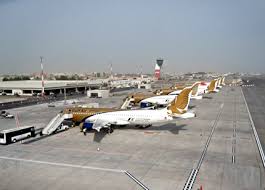 Gulf Air's Economy Class comes with comfort and space for all travellers on a budget.

Seats in Economy class can be booked in advance if you require more legroom, at an additional fee. Preferred seats are exit row seats and bulkhead seats and are subject to availability. Each Economy zone is at priced at different seat pricing. Please note that there are terms and conditions for prepaid seat selection. Any seat changes require a fee.

This airline does not have a set Premium Economy. Passengers must choose to travel either in Economy or Business/First (Falcon Gold).

Falcon Gold Business Class boasts one of the longest flat-bed in the world with all direct aisle access. All seats have a privacy screen that can be elevated to create more privacy, noise-cancelling headphones, inbuilt massage function, and 22-inch flatscreen TV.

Gulf Air only has one premium class; Falcon Gold. Read the information in Business Class above to discover more about this class.

The Falcon Gold lounge is available in Bahrain, Dubai and London. Passengers can enjoy their airport experience in comfort with exceptional service in privacy. Passengers are able to do as they please, whether that’s sleep and relax or concentrate on work or catch up with events. Included in the lounge is a restaurant, free WiFi access, shower facilities and premium comfort seating.

Please click on the logos below to find out more about airlines that fly similar routes to Gulf Air:

Gulf Air provides passengers with meals on board their flights. If passengers upgrade to the Falcon Gold class, they will experience the Sky Chef for a fine dining experience. This is much like the quality and service you would receive in a five-star restaurant, the only difference being that you are dining above the clouds. Food will be inspired by European and Middle Eastern cuisine in a contemporary mezze style, including a starter, main and dessert.

All passengers on Gulf Air flights can request a special meal to suit their dietary needs and requirements, providing they pre-order it at least 24 hours in advance. The following are the meals that can pre pre-ordered with Gulf Air:

Gulf Air does not currently offer its passengers in-flight WiFi onboard.

Gulf Air operates a frequent flyer program called Falconflyer to reward regular travellers with Gulf Air. Earn loyalty points to progress to higher levels of membership and exchange the awarded Miles for free tickets or upgrades. When you book a ticket with Gulf Air you can collect points to work towards special deals. Unfortunately, Gulf Air is not yet part of an airline alliance. It is very easy to collect frequent flyer points with your Alternative Airlines purchase, just check out our step-by-step frequent flyer guide.

Some passengers may require medical clearance to travel on Gulf Air. A form can be obtained online on the airline's website, and can be filled in by the passenger's doctor stating that you're fit to travel.

Gulf Air operates an unaccompanied minor programme on their flights. This can be booked for children aged between 5 and 11 who are travelling alone. A member of staff will meet them at the check-in desk and assist them through thte airport, through the flight and to the arrival hall of the destination airport.

Gulf Air started scheduled A320neo operations this weekend, following the delivery of its first of the type on Saturday. The A9C-TA, which began service on Sunday, will operate on select rotations from Bahrain Int'l to Dubai Int'l, Larnaca, Athens Int'l, Kuwait and Beirut. The Bahrain airline will add a further two A320neos in 2018 followed by four in 2019, three in 2021, and three in 2022.

According to Gulf Air's scheduling, the airline will fly the service daily. Leaving at 9.15pm Bahraini local time and arriving at 4.30am local Indian time.