Hawaiian Airlines is a US airline that offers scheduled flights. The airline is based at Honolulu International Airport, with a secondary hub out of Kahului Airport on the island of Maui. It's the biggest airline within Hawaii and the flag carrier for the state. The airline mainly links cities within Hawaii to cities within the US and to other international destinations. The airline had a domestic subsidiary, Ohana By Hawaiian, which flew inter-island flights. However, Ohana By Hawaiian was suspended in late 2020 after low-passenger demand due to the coronavirus pandemic.

Hawaiian Airlines was founded in 1929. To begin with, the airline only offered inter-island flights and established itself as the primary airline for travelling around Hawaii. In the 1980s, the airline branched outside of Hawaii for the first time and grew its route network to include ;non-stop services to Hawaii from destinations in North America, Asia and the South Pacific, as well as service to every major Hawaiian Island.

Visit our blog to find out which movie locations were filmed in Hawaii and are amazing to visit. Please visit our travel documents page to find out whether you need a passport to travel to Hawaii.

Top Tip: If you're looking to spread the cost of your Hawaiian Airlines flights, you can discover all the buy now pay later/financing options we offer here at Alternative Airlines.

Passengers are allowed to bring 1 carry-on bag and 1 personal item onboard their Hawaiian Airlines flight. Carry-on baggage must not exceed 114cm/45in in linear dimensions and weight no more than 11kg/25lbs.

Checked baggage must not exceed a weight of 23kg/51lbs and 157cm/62in in linear dimensions per bag.

As a guest in the Premium Cabin, you’ll enjoy our highest level of comfort. Surrounded by contemporary, modern Island-style design, accentuated with our authentic Hawaiian hospitality, you'll have arrived in the Islands the moment you settle in.

You can lie completely flat, nestled in premium bedding, with in-seat power, and enjoy advanced in-flight entertainment on next-generation tablets. On flights over 8 hours, enjoy your luxury amenity kit.

The airline provides a dining experience inspired by the Hawaiian islands. All meals are created by Chef Lee Anne Wong and feature enticing appetisers to tasty mains and delicious desserts.

Hawaiian Airlines launched a new set of special diet meals in octubre 2018, featuring vegetarian, vegan and gluten-free options. These can be ordered at least 48 hours prior to departure, and order from the Hawaiian Airlines reservations department.

For any other special dietary requirements which are not satisfied by the options offered, passengers are welcome to bring their own food onboard.

Hawaiian Airlines passengers are treated to an array of complimentary drinks on board. The menu in the link above often displays the available beverages which will be available for your flight.

For a smoother check-in, please prepare your passport and ticket details upon check-in.

Hawaiian Miles can be earnt by flying with Hawaiian Airlines and then can be redeemed for flights, upgrades and lounges.

The most active members, are designated Pualani Gold and Pualani Platinum with privileges such as separate check-in, Premier Club Lounge, priority upgrade and standby processing or complimentary upgrades.

Premier Club members receive their first two check-in bags for free, can relax in the clubs in Honolulu, Hilo, Kahului, Kona and Lihue and can get Zone 2 priority boarding with early access to overhead bins. 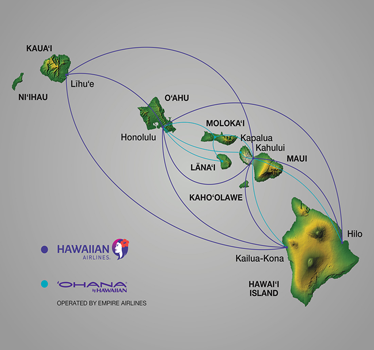 The airport has 4 runways and can handle nearly 25 million passengers every year.

Other airlines which fly to and from Honolulu International Airport includes Air China, Air New Zealand, All Nippon Airways, China Airlines, American Airlines, Asiana Airlines, Fiji Airways (formerly Air Pacific) and WestJet. Island Air used to have its hub at this airport, before ceasing operations in 2017.