Make an Iberia Express Booking and Find Some Amazing Deals

Iberia Express is a Spanish airline based in Madrid, at Adolfo Suárez Madrid-Barajas Airport.

Iberia Express operates short and medium-haul flights to 31 destinations (26 international and 14 domestic). The airline's parent company is Iberia, a long-haul airline business and recognised as Spain’s largest transport group. This is due to leading the Europe to Latin America flight Market and having the largest number of destination services.

Iberia Express commenced operation in marzo 2012 and is now recognised as Europe’s most punctual European airline.

Hand Baggage is accepted on all fares. The maximum size of 1 piece of hand baggage is 25 x 45 x 56cm.

Checked Baggage must not exceed the weight of 23kg. If baggage weighs more than 23kg, an excess weight fee will apply.

Iberia Plus customers traveling Business Class can have 1 additional baggage (not exceeding 23kg) to take on board.

Spain and the Balearic Islands

As of septiembre 2016, Iberia Express fleet comprises of the following aircraft: 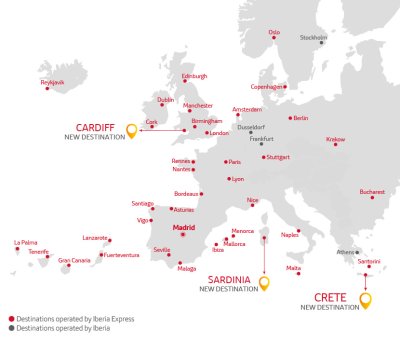 Economy Class is one of two cabin classes that Iberia Express offers.

Economy Class offers a comfortable cabin with a good level of service.

Passengers can order food and drink from the airline's inflight menu, which is inclusive of sweet and savoury items such as sandwiches, baguettes and other snacks. As well as a full drinks menu with both alcoholic and non-alcoholic options.

Iberia Express use specially designed slim seats which give extra legroom and extra space between rows. The seats also contribute to the airline's efforts to stay environmentally-friendly by reducing the amount of fuel burned when flying.

Iberia Express doesn't have a First Class cabin. However, its Business Class is similar to other airlines Premium Economy in terms of price and service.

Iberia Express Business Class cabin offers a higher standard of service, with more seat room and some extra perks on the ground too!

Depending on which airport you're flying from, Business Class tickets will gain you access to the airport executive lounge, as well as priority check-in and boarding.

Inflight, passengers can enjoy a range of different food from the Business Class inflight menu. Passengers will be served breakfast, lunch or dinner depending on which time of the day that they fly at, as well as additional hot and cold snacks and drinks.

Iberia Express' slim seats in Business Class are set out in a 3 x 3 formation, with the middle seat left vacant as to give extra room and comfort for each passenger.

Please click on the logos below to find out more about airlines that fly similar routes to Iberia Express:

Iberia express will work to grow Spanish tourist numbers by strengthening their partnership with the Irish tour company Tourism Ireland. The new friendship will allow Iberia Express to promote tickets to Cork, an Irish city, to Madrid the capital of Spain.Spain is the fifth largest market for Irish tourism, with travel by Spanish residents to Ireland has grown significantly over the past 17 years, going from just 90,000 Spanish visitors in 2000 to a record 443,200 in 2017. In a bid to ensure this growth continues, the Iberia Express promotion will run for the rest of 2018.