Make an interCaribbean Airways Booking and Find Some Amazing Deals

interCaribbean Airways is an airline that offers scheduled passenger flights around the Caribbean. The airline is based at Providenciales International Airport and flies to over 20 destinations across more than 10 Caribbean islands, including to locations within Antigua, Dominican Republic and Puerto Rico. The airline is also the only non-Jamaican airline to offer domestic flights within Jamaica.

The airline was launched in 1991 as a charter airline under the name Interisland Airways. In 2003, the airline entered scheduled services and rebranded as Air Turks & Caicos. In 2013, to reflect its intention to offer flights across the Caribbean, the airline rebranded again to interCaribbean Airways, which is the name and branding that it uses today.

Thai AirAsia X flies to over 10 destinations across east Asia and Australia.

interCaribbean Airways have announced that starting agosto 2019, they would be launching new routes between Santo Domingo and Havana, and between Santiago Cibao to Tortola.

Passengers are allowed one carry-on baggage per person, free of charge. This baggage must not exceed the dimensions of 12 x 9 x16 inches.

interCaribbean Airways do not currently have the facilities to offer their passengers online check-in for their flights.

There is currently only one type of class in the cabins of this airline, Economy Class. This means that passengers all have a very similar flight experience. However, there are different types of fares available to purchase to help personalise your flight:

The saver fare provides passengers with a cheap option to fly. This ticket type is non-refundable and requires you to book in advance to get the cheapest fare. Changes to the ticket can be made, subject to a fee by both the airline and often the travel agent. Passengers will also get free seat selection.

The best fare is a good price, but with some restrictions and charges for changes applying. This fare also includes a free selection of your seat.

This flexible ticket means that it is free to change the departure dates or cancel the ticket. However, this may still be subject to travel agent change fees. This induces a free choice of where you will sit on the plane.

There isn't any in-flight entertainment system onboard interCaribbean Airways flights. There may be an in-flight magazine to read, but it's subject to availability.

Intercaribbean Airways doesn't have a meal service onboard its flight but it does offer its passengers light refreshments, including soft drinks and small snacks.

Intercaribbean Airways doesn't have WIFI available on any of its flights.

Passengers can use the points that they earn through Cacique Rewards to book future flights on the airline.

The airline is also the hub for Caicos Express Airways, but also operates services for a number of other airlines. For example, American Airlines, Bahamasair, Southwest Airlines and Air Canada all operate services from this airport. 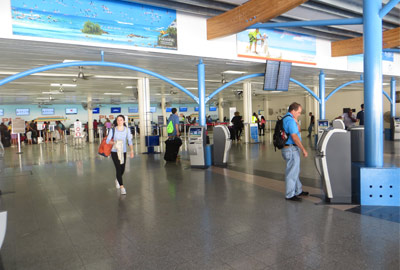 Please click on the logos below to find out more about airlines that fly similar routes to interCaribbean Airways: