Interstate Flights in the USA

With the US consisting of 50 states, there's an abundance of culture, history and wildlife waiting to be explored. If you're planning to take in all that the US has to offer, you'll most likely be flying interstate during your North American tour. With the country being roughly 2,800 miles wide, flying interstate is the easiest and quickest way to travel between cities within two different states in the US.

The USA's 50 states are home to some of the most popular, regularly visited US cities including New York, Los Angeles, Miami, San Francisco, Chicago, Seattle, Atlanta and more.

What Are Interstate Flights Within the USA?

Interstate flights are flights that depart and land in two different states within the borders of a single country. For example, since the US is divided into 50 states, an interstate flight within the US would be one that departs from one of these states, such as Oregon, and lands in another state, such as Alabama. 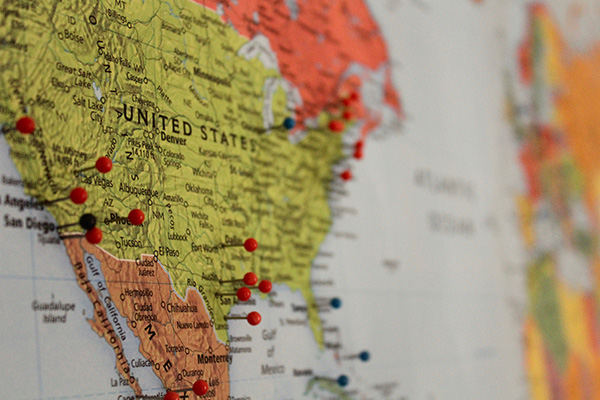 Booking interstate flights within the US is easy when you use Alternative Airlines. Using our search form at the top of the page, you can find the perfect flight for you, whether it's one-way, return or multi-city! All you need to do is enter your departure and arrival destinations along with the dates you're planning to fly, how many passengers will be flying and the cabin class you'd like to fly in. We ticket all major carriers that operate interstate flights within the US, as well as many smaller airlines.

With Alternative Airlines, you can book any domestic or interstate flight within the US and spread the cost of your tickets over time. It's incredibly easy to do so when booking through our site - we offer many flexible payment plans at checkout depending on where you reside and the currency you're paying in.

If you're a resident of the US, you can choose from Afterpay, Klarna, Affirm, Zip, Uplift and PayPal Credit.

We also offer Tabby and Postpay as well as many other options which will be available to you at checkout depending on where you reside and the currency you're paying in.

Popular Interstate Routes within the US

Within the US, there is an extensive network of interstate flights that are operated frequently by a number of well-known carriers including Alaska Airlines, American Airlines, Delta, Frontier, JetBlue, Southwest, Spirit, Sun Country and United.

Take a look at these popular interstate routes in the US:

What airlines fly interstate within the US?

Major carriers operating regular interstate flights within the US are Alaska Airlines, American Airlines, Delta, Frontier, JetBlue, Southwest, Spirit, Sun Country and United. There are also smaller carriers mainly flying to/from Hawaii and Alaska including Hawaiian Airlines and Ravn Alaska. At Alternative Airlines, you can book your flights with any of these airlines as well as the 600+ other airlines we ticket on our site.

Discover more about all airlines that fly within the US.

What is an interstate flight from Hawaii?

Hawaii is an island state of the US, located in the Pacific Ocean. It's approximately 2000 miles away from mainland USA. Flights between mainland USA and Hawaii can be classed as interstate flights as they are departing from one US state (Hawaii) and arriving at another (e.g., Hawaii to California).

Are interstate flights the same as domestic flights?

What is a US state?

In the US, a state (of which there are 50) is a constituent political entity - each state has its own independent government, constitutions and laws.

How many states does the USA have?