Make an Izhavia Booking and Find Some Amazing Deals

Founded in 1992, Izhavia is the national airline of the Udmurt Republic of Russia. Izhavia offers domestic scheduled passenger and charter services from its hub airport at Izhevsk Airport (IJK). The airline currently flies passengers between three destinations on a scheduled regular basis. Although, altogether, its flown to a total of 16 destinations, across Europe and Asia.

Izhavia was created in 1992 under the name 'Izhevsk Air Enterprise'. However, later changed its name to Izhavia, which it now operates as today.

Izhavia has a fleet comprised of over 15 aircraft. Within its fleet, Izhavia has a mix of all Russian or Soviet Union aircraft, with a number of Antonov, Tupolev and Yakolev jets.

Izhavia passengers are given an overall free baggage allowance of 20kg in Economy Class and 30kg in Business Class for both checked and carry-on baggage.

Carry-on baggage on Izhavia flights can't weigh more than 5kg and must fit within the dimensions of 45 x 35 x 15 cm. Although, the carry-on baggage limit will depend on how heavy the passengers checked baggage is.

For example, if a passenger is flying in Economy Class and brings 17kg of checked baggage, this means they're allowed a maximum of 3kg of carry-on baggage within their free baggage allowance.

The maximum weight limit for carry-on baggage is 5kg, but passengers can bring less. For example, if a passenger is flying in Economy Class and brings 4kg of carry-on baggage, this means they're entitled to bring 16kg of checked baggage.

If a passenger is unable to check-in online or can't print out their boarding pass, they can check-in at the airport by visiting an Izhavia member of staff at the Izhavia check-in counters. Please be aware that airport check-in closes 50 minutes before departure time and passengers must give sufficient time to complete the check-in process, drop any checked baggage, pass security and board the flight.

Please click on the logos below to find out more about airlines that fly similar routes to Izhavia: 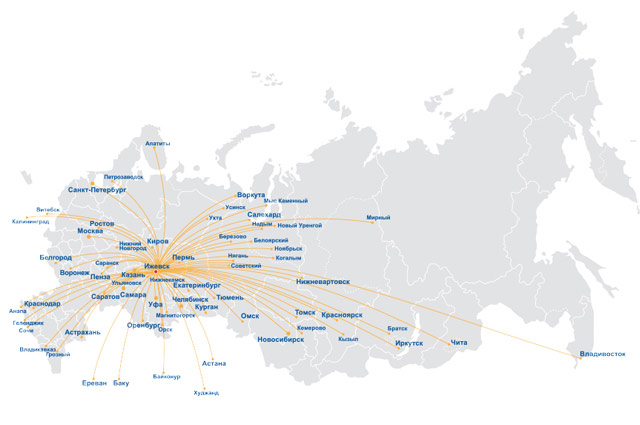 Izhevsk Airport is a domestic airport in eastern Izhevsk, Russia, and is the hub airport for Izhavia. Izhavia has been based at Izhevsk Airport for many years — the airline was even named 'Izhevsk Air Enterprise' in its first years of operation.

Izhevsk Airport mainly deals with small Russian airlines, offering domestic services throughout the country. Izhavia is the only airline based at Izhevsk, however, other airlines that fly to and from Izhevsk include RusLine, Orenburzhye and Aeroflot. 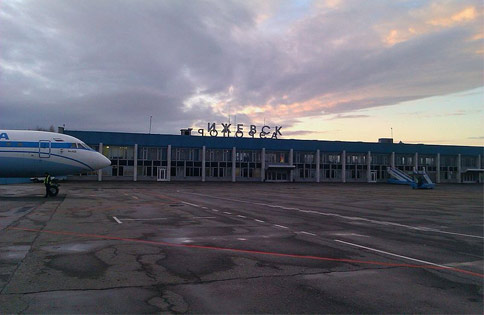