The airline was founded in 2008 and flew its inaugural service with a long-haul flight from Incheon International to Honolulu Airport.

After Jeju Air, Jin Air is the second-largest low-cost carrier in Korea and is one of the most well-connected airlines in the country.

Did you know? If you book your Jin Air flights through Alternative Airlines, you can pay later with one of the many flexible payment plans we offer at checkout. Read our Fly Now Pay Later with Jin Air guide for more information.

Jin Air is the only low-cost airline in Korea that uses widebody aircraft to operate its flights. The airline has a fleet that is comprised entirely of Boeing, with a mix of Boeing 737-800 and Boeing 777-200ER aircraft. 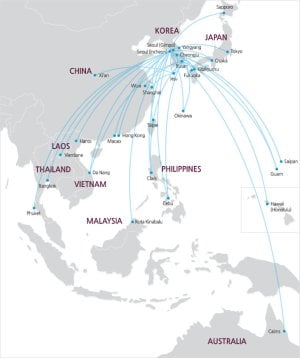 Passengers are allowed one item of carry-on luggage, weighing a maximum of 12kg and must fit within the combined dimensions of 115cm.

In addition, passengers are permitted one small personal item, for example, a small handbag, a coat or a laptop case.

The free baggage allowance for checked baggage depends on the route flown and the age of the passenger. Take a look at the table below for more information.

Jin Air offers online check-in for domestic flights and international flights that depart from Incheon or Busan. This opens 24 hours before flying and will close 30 minutes prior to departure for Korean domestic flights, or 90 minutes prior to departure for international flights. To check-in visit the link online check-in page. Please note this service is not available for Guam or America.

Passengers who cannot check-in online must report to the Jin Air check-in desk at the airport and check-in in person.

Enjoy comfortable and spacious seating with a good amount of legroom.

The airline also offers JINI PLUS seats, which are larger and available to purchase at an additional cost. JINI PLUS seats are 15cm wider than other seats in Economy Class.

Passengers can enjoy a range of movies, TV shows, music and more with Jin Air's in-flight entertainment system, JINI Entertainment. To use JINI, passengers must download the JINI PLAY app to their IOS or Android device prior to the flight and — once in-flight — connect to the JINI PLAY in-flight Wi-Fi network to access JINI.

JINI Entertainment is free to use on select domestic flights.

In-flight, Jin Air offers a range of hot meals and sandwiches that are inspired by Korean cuisine, as well as a few international dishes. Meals are complimentary on long-haul flights and are subject to availability on short-haul flights.

As well as meals, the airline also offers a selection of snacks and drinks, which are available to order once in-flight.

Jin Air's WIFI network, JINI PLAY can only be used to access the airline's in-flight entertainment system. The WIFI cannot be used to browse the web.

Passengers can collect Nabi Points for every Jin Air flight that they purchase and use their collected points to purchase flights in the future.

Points are earned for each one-way flight purchased, with more points earned for international flights than earned for domestic flights.

Jin Air isn't a member of any airline alliance. However, it does have codeshare and/or interline agreements with the following airlines:

Incheon International Airport is the hub airport for Jin Air. It's one of the largest and busiest airports in the world, with seeing over 60 million passengers and 2.9 tonnes of cargo handled annually. It has two terminal, three runways runway and one helipad.

The airport has a range of facilities, including special amenities such as a spa, sleeping rooms, casino and the Museum of Korean Culture. 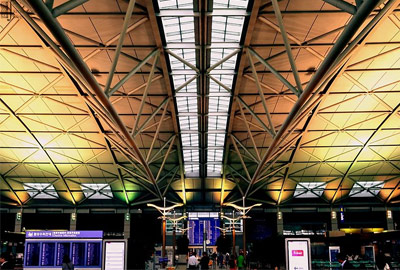 Book your chosen Jin Air flight with Alternative airlines as we offer to book in English. This is paired with a wide choice of flight times, itineraries and payment methods, including chosen currency, providing a trusted company with great choice and prices. Any questions or problems you may have can be dealt with by our excellent customer service team in English.

Please click on the logos below to find out more about airlines that fly similar routes to Jin Air: