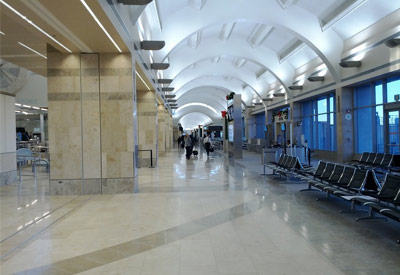 The first airstrip built on the airport dates back to 1923 back when the airport was a flying school. The County of Orange acquired the land in 1939 and by 1942, the area was turned into an Army Air Base, which was used during World War II. After the war, the airport was used for different uses in aviation.

The airport was completely rebuilt in 1964, with an extra runway (two in total). By the end of the 1960s the airport had another terminal built, named the Eddie Martin Terminal.

In 1979, the airport was renamed the John Wayne Airport, after previously being known as the Orange County Airport. In the 1990s, the Eddie Martin Terminal was demolished and replaced with a new passenger terminal — the Thomas F. Riley Terminal, which is the terminal that exists today.

What is the airport code for John Wayne Airport?

The airport code for John Wayne Airport is SNA.

The airport has an award-winning concessions program, featuring more than 300 commercial venues to meet all passenger’s shopping, dining and service needs. 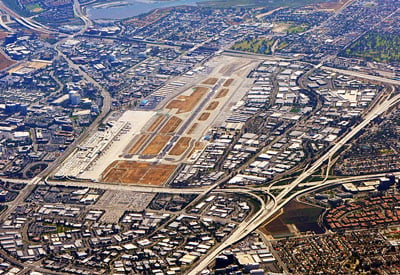 Terminal C opened in 2011 and has a variety of shops and restaurants that are exclusive to the terminal. Terminal C also has the ticket counters for Frontier and Southwest but doesn't have any airport/airline lounges.

Only JetSuite uses John Wayne Airport as its hub. However, Southwest does use it as a focus city.

Take a look at the table below to see a full list of airlines that fly to/from John Wayne Airport.

How to get to John Wayne Airport

As a rough guide, a taxi from Disneyland to John Wayne Airport will cost roughly $40 USD. It might be difficult to flag a taxi down unless you're travelling from the Hollywood and Downtown LA area. Therefore, it's advised that you pre-book a taxi before, which, the person(s) in charge of your accommodation should be happy to help with.

There are also many taxi apps available in the city, with Lyft, Uber and Wingz permitted to drive to John Wayne Airport.

John Wayne Airport doesn't have its own train station. The nearest train stations are in Irvine, Santa Ana and Tustin, which are all around 10 miles away from the airport.

iShuttle provides a shuttle bus from Tustin Metrolink Station to the airport on Route A. But, with other stations, you'd need to find an alternative way of getting to the airport.

There is an express bus that travels between Disneyland and John Wayne airport.

Other than that, Orange Country Transportation Authority, shortened to OCTA, drive to John Wayne Airport on Route 76.

The iShuttle Route A also drives to the airport.